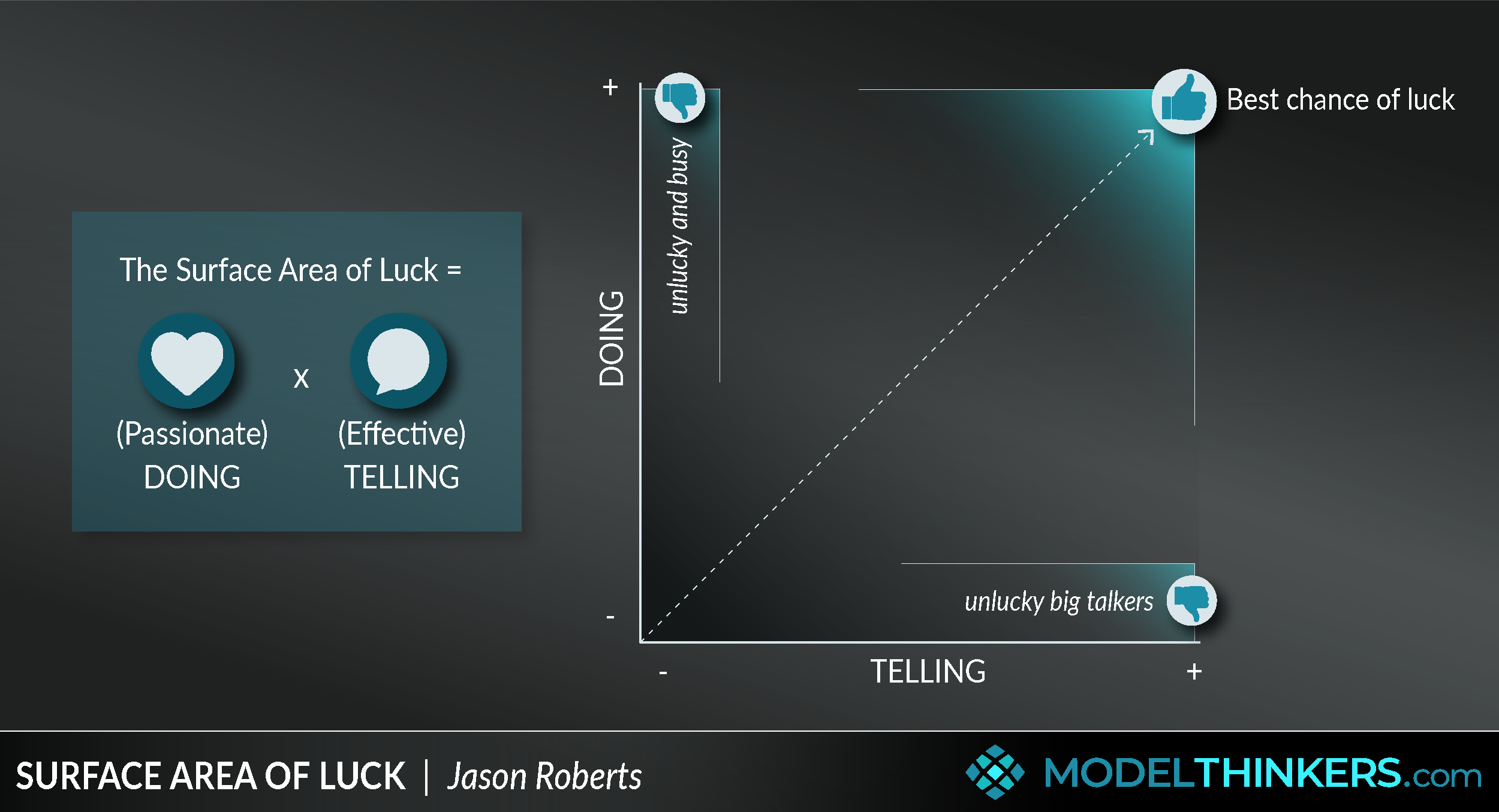 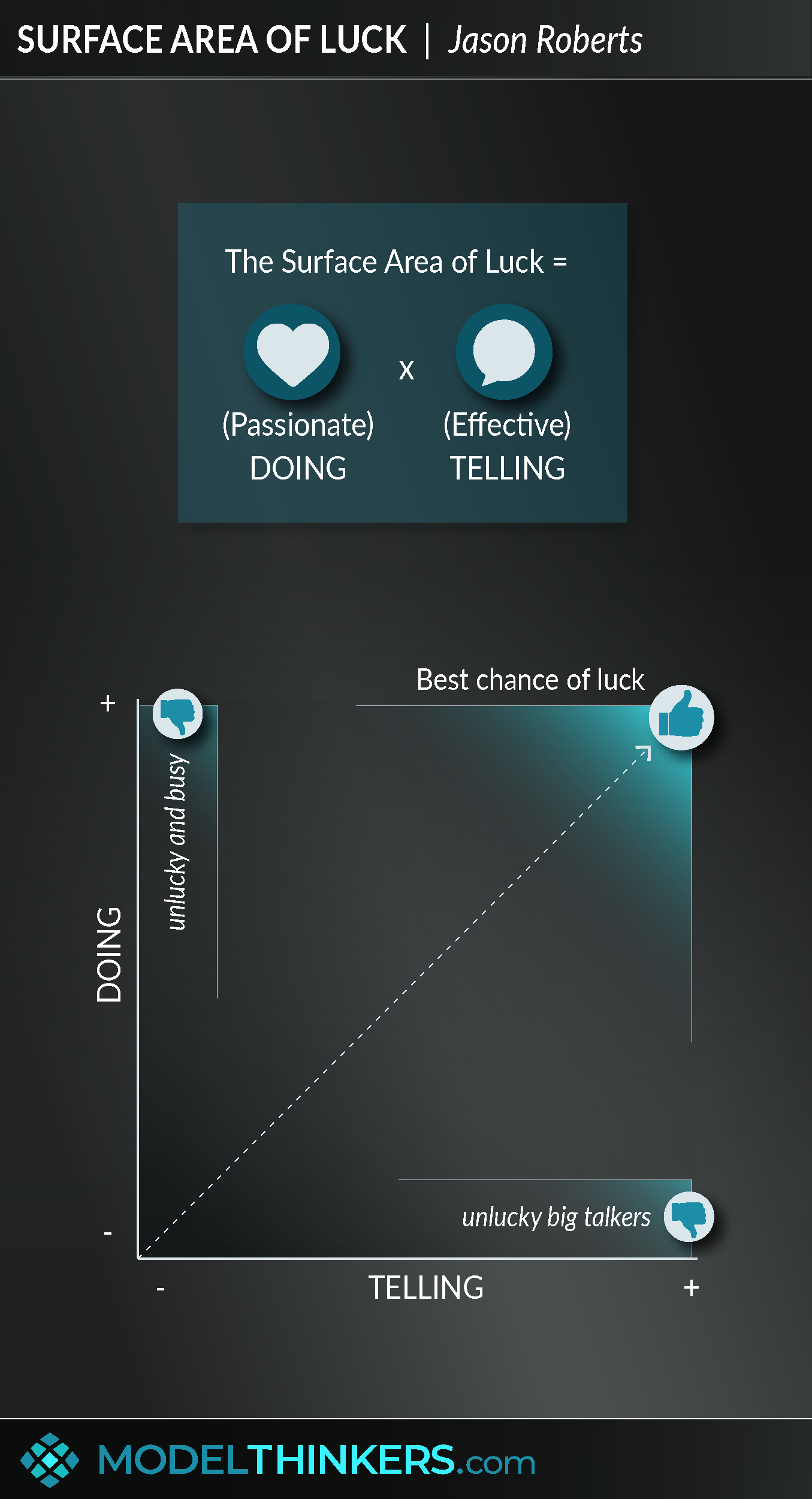 Luck, by definition, is about chance, but it's not totally out of your control. So why not use this model to increase your chance of luck?

The Surface Area of Luck, or your chance of being lucky, is equivalent to the action you take towards your passion, multiplied by the number of people you effectively communicate your passion and activities to.

In his original post outlining this simple and powerful idea, entrepreneur and coder Jason Roberts explained that taking action towards your passion will develop expertise in that area. Further, that “when people become aware of your expertise, some percentage of them will take action to capture that value, but quite often it will be in a way you would never have predicted.”

Roberts also pointed to the infectious nature of passion, and that taking action and sharing your passion will tend to attract others towards it, again amplified by the number of people who know about it.

Tina Seelig, Stanford professor and the creator of Framestorming, has been studying entrepreneurs and luck for some time. Her reframing of how to view luck aligns well with this model. Seelig explains: “Luck is rarely a lightning strike, isolated and dramatic. It’s much more like the wind, blowing constantly. Sometimes it’s calm, and sometimes it blows in gusts. And sometimes it comes from directions that you didn’t even imagine.”

To better 'catch luck', Seelig encourages you to consistently take small risks that push your comfort zone. In doing this, explore the types of risks you’re willing to take, and identify where you might challenge yourself. For example, you might explore financial risk, investing money in something; intellectual risk, playing with a new idea and challenging your assumptions; or social risk, talking to someone new.

Richard Wiseman, the author of the Luck Factor, agreed. His extensive research pointed to lucky people being the ones who were willing to continuously experiment and try new things.

THE CHALLENGE OF EFFECTIVE TELLING.

Obviously, 'effective telling' is not about pushing your passion onto anyone who dares come close to you. Rather, it involves effective networking and communication.

This includes engaging with people from a place of care and generosity rather than focusing on selling or personal gain. It also means connecting with the right platforms and communities who might be interested in what you’re doing and are passionate about.

Use Ikigai or the Golden Circle to better align your ‘doing’ to your passion. The Golden Circle is particularly relevant when remaining open to unexpected opportunities that might look different from your plan but still address your underlying ‘why’.

In terms of developing expertise, use Deliberate Practice and Double Loop Learning to ensure that you improve your skills and mental models as efficiently as possible in your chosen area.

Finally, in terms of understanding causal factors behind luck, you might want to consider Regression to the Mean and Probabilistic Thinking.

You don’t have to quit your job and sell the house to take action on what you’re passionate about. This might involve offering free services, volunteering, or side projects — it’s all about expanding your expertise and experience in your passion.

Part of doing more in your area of passion involves taking consistent small risks and experimenting. Push yourself out of your comfort zone to extend yourself and, as you do it, use Deliberate Practice and Double Loop Learning to learn more and deepen your expertise.

Experiments will fail, some of your doing with seem to go nowhere. Consider what you can learn from it, how you can incorporate it into your broader story, and try again. It's all part of the process.

Rather than judging your movement by whether a project is successful, consider projects based on their ability to extend your expertise and network in your chosen area(s) of passion.

Work hard to expand your network by making new connections and contributing to them in meaningful ways. Be open, be generous, and put yourself forward in an authentic way as you connect and contribute to others.

Be open to sharing the passion work that you are doing in ways that people might find interesting and useful. Ensure that your network knows what you are doing, what you care about, and what you’re capable of, without ‘selling’ in a crass sense. Think about how and when you tell your story through conversations, blog posts, social media, or anywhere.

Much of the discussion around luck explores the tendency for lucky breaks to come in unexpected ways, from unexpected sources, and new opportunities taking you on unexpected paths forward. To ‘catch luck’, you’ll need to be open, flexible, and ready to take these opportunities, even when they don't align with your original plan.

Explore More
Surface Area of Luck is featured in these Playbooks:

This podcast transcript tells the story of Jason Roberts, the creator of this model. The story describes how Roberts met Travis Kalanick, who was to become CEO and co-founder of Uber, at a Tech Crunch party. “It turns out that Jason had a lot of interesting stuff to say, because of interesting work that he had done before. He had worked on an algorithmic trading startup with one of his friends after school and he had also created a startup that was a good candidate to be bought by Google as part of their app suite.”

“But it turns out he made some mistakes with it on the business side. Google actually did reach out to him and was interested but he messed up the acquisition and wrote a pretty popular blog post about that that made it to the top of Hacker News. He just did a good job of communicating 1) that he was passionate about the technologies that he had worked with and 2) that he had the skills. He wasn't looking for a job or anything at the party.”

Later on, Roberts was offered the CTO position at Uber, though he did contribute to Uber and continued to pursue other projects as well.

Tina Seelig, the creator of Framestorming and Stanford Uni professor, has talked a lot about luck. In this interview with Guy Raz, she explained that over a decade ago, while on a plane, she randomly decided to start up a conversation with the man next to her on a plane.

“We ended up having a fascinating conversation. I learned all about the future of the publishing industry. So about three-quarters of the way through the flight, I decided to take another risk, and I opened up my laptop, and I shared with him a book proposal. He read it, and he said, you know what, Tina? This isn't right for us, but thank you so much for sharing.’”

“A couple of months later, I reached out to him, and I said, ‘Mark, would you like to come to my class? I'm doing a project on reinventing the book - the future of publishing’. He said, great, I'd love to come. So he came to my class, and we had a great experience. A few months later, I wrote him again. This time I sent him a bunch of video clips from another project my students had done. He was so intrigued; he wanted to meet those students.

“Now, I have to tell you I was a little bit hurt, right? I mean, he wanted to do a book with my students and not with me, but OK, it's all right. So I invited him to come down, and he and his colleagues came to Stanford, met with the students. And afterwards, we had lunch together. And one of his editors said to me, hey, have you ever consider writing a book? I said, funny you should ask. And I pulled out the exact same proposal that I had showed his boss a year earlier. Within two weeks, I had a contract, and within two years, the book had sold over a million copies around the world.”

This is a conceptual model, not a mathematical promise. Luck, by definition, is unpredictable and impossible to quantify. This model works intuitively, but of course, is also impossible to verify or measure.

Jason Roberts's original post about the model can be found on his blog here. See more about his story in the In Practice section above.