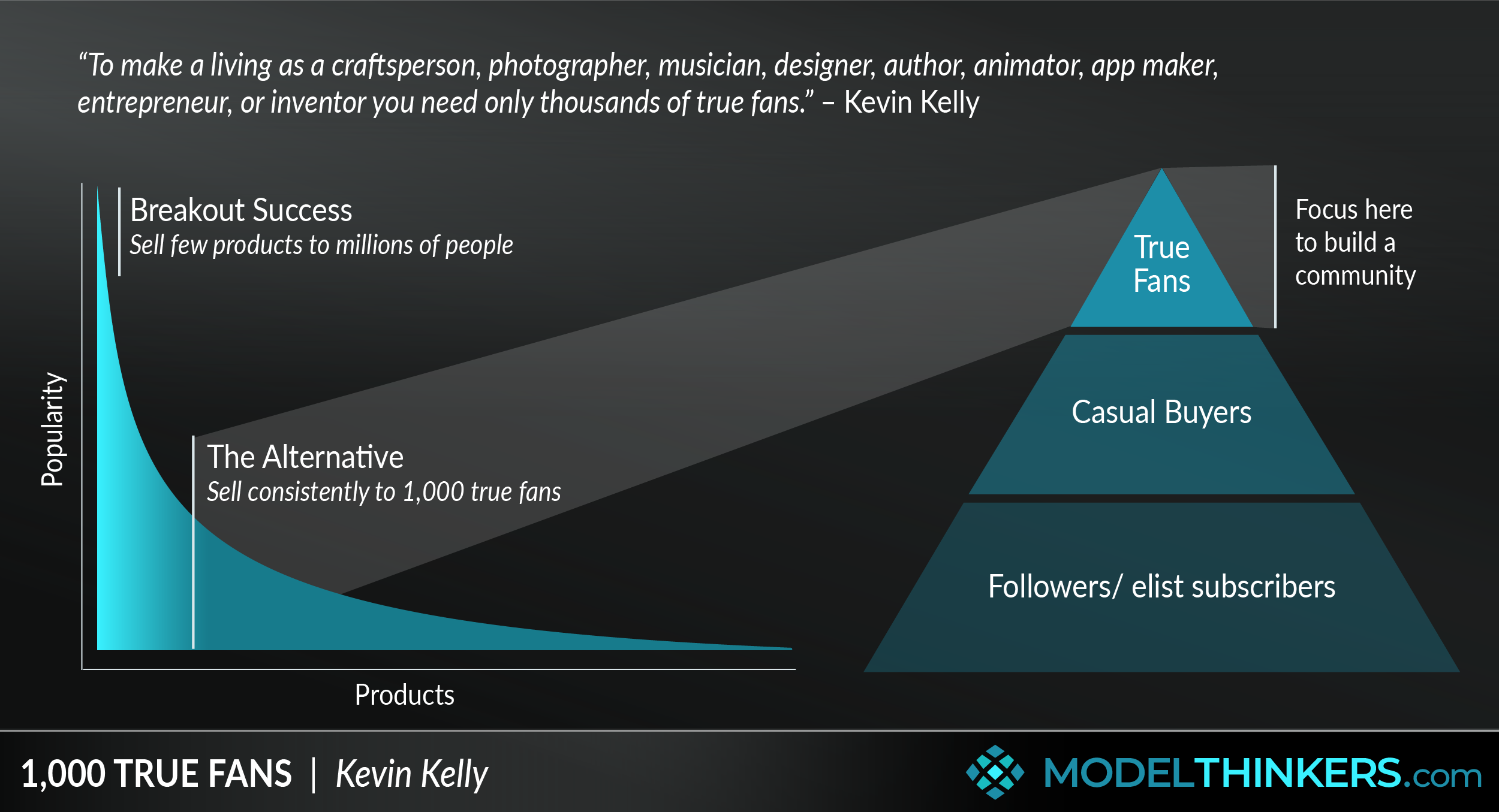 “To be a successful creator you don’t need millions. You don’t need millions of dollars or millions of customers, millions of clients or millions of fans. To make a living as a craftsperson, photographer, musician, designer, author, animator, app maker, entrepreneur, or inventor you need only thousands of true fans.” So begins 'Senior Maverick for Wired' Kevin Kelly’s popular article which inspired this model.  The 1,000 True Fans approach argues that rather than seeking breakout fame and a customer base of millions, creators and entrepreneurs can aim for 1,000 loyal customers who deliver an average of $100/ year profit each.  NOT ALL OR NOTHING.  People pursuing creative and/or entrepreneurial success will generally aspire to celebrities and high profile successes whose efforts, skill, persistence and luck intersected to make them a breakout success. This model suggests an alternative approach of building deeper relationships with a relatively small customer base. The result is a form of ‘micro-celebrity’, where creators are deeply respected by small niche communities — their loyal 'true fans' — but remain anonymous to the broader population. Those true fans are the ones who will engage with and buy almost everything the creator produces. Kelly points out that: “Early in the rise of the web the large aggregators of content and products, such as eBay, Amazon, Netflix, etc, noticed that the total sales of *all* the lowest selling obscure items would equal or in some cases exceed the sales of the few best selling items.” This Long-Tail Effect is a reminder that smaller, consistent sales of the ‘obscure’ are a rich and undervalued market.  GO DIRECT AND BUILD MEANINGFUL CONNECTIONS.  “Everything made, or thought of, can interest at least one person in a million — it’s a low bar,” Kelly argues. If you achieve that '1 in a million' engagement rate for our global population, it will deliver over 7k people. The trick is, of course, to find and develop deeper relationships with them!  Kelly suggests that traditional corporations and media are ineffective means to connect with niche audiences and instead points to the rise of social media, peer-to-peer networks, and online communities. These trends also allow you to cut out the middleman and create direct relationships which are crucial to shifting someone from a casual buyer to a true fan as well as allowing you to maximise the return from each purchase with fewer commissions or platform costs.  Practically speaking this approach might involve building a social media presence; creating an elist; using patron services; and/or experimenting with crowdfunding as you start to build your community beyond the content you offer. With each option, focus on providing a two-way conversation and empowering your community to connect with each other.  IN YOUR LATTICEWORK.  This model works well in combination with the Surface Area of Luck, and might require you to use the Regret Minimisation Framework to help take the plunge. It’s also worth considering this model in the context of Ikigai to determine the intersection between what you’re good at, what you love, what the world needs, and what you can be paid for.  In terms of building a true fan base and community, you will likely need the Trust Equation, and might want to consider Dunbar’s Number, the IKEA Effect, and the 4Ps of Marketing. 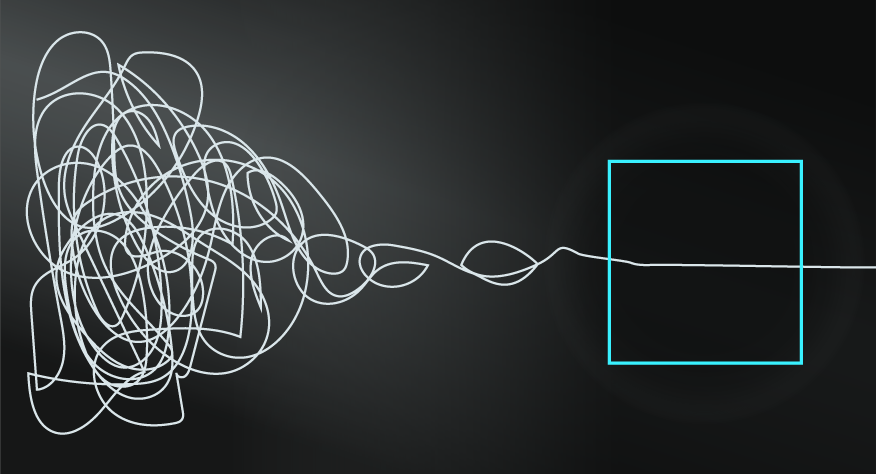 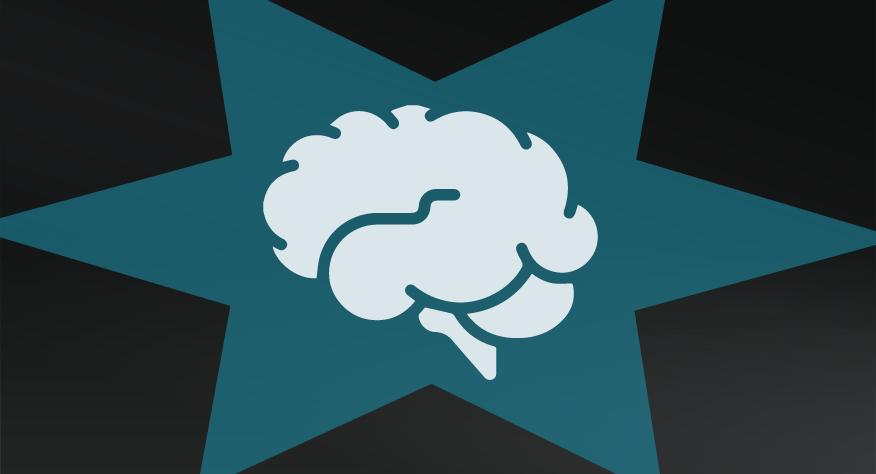 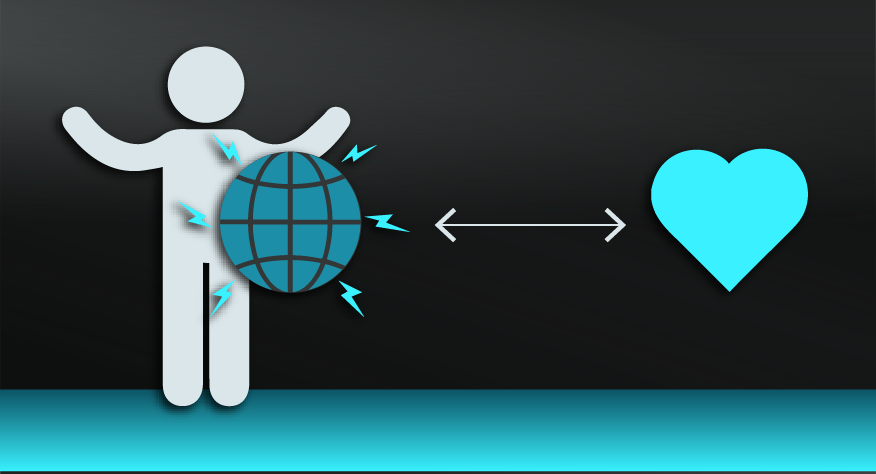