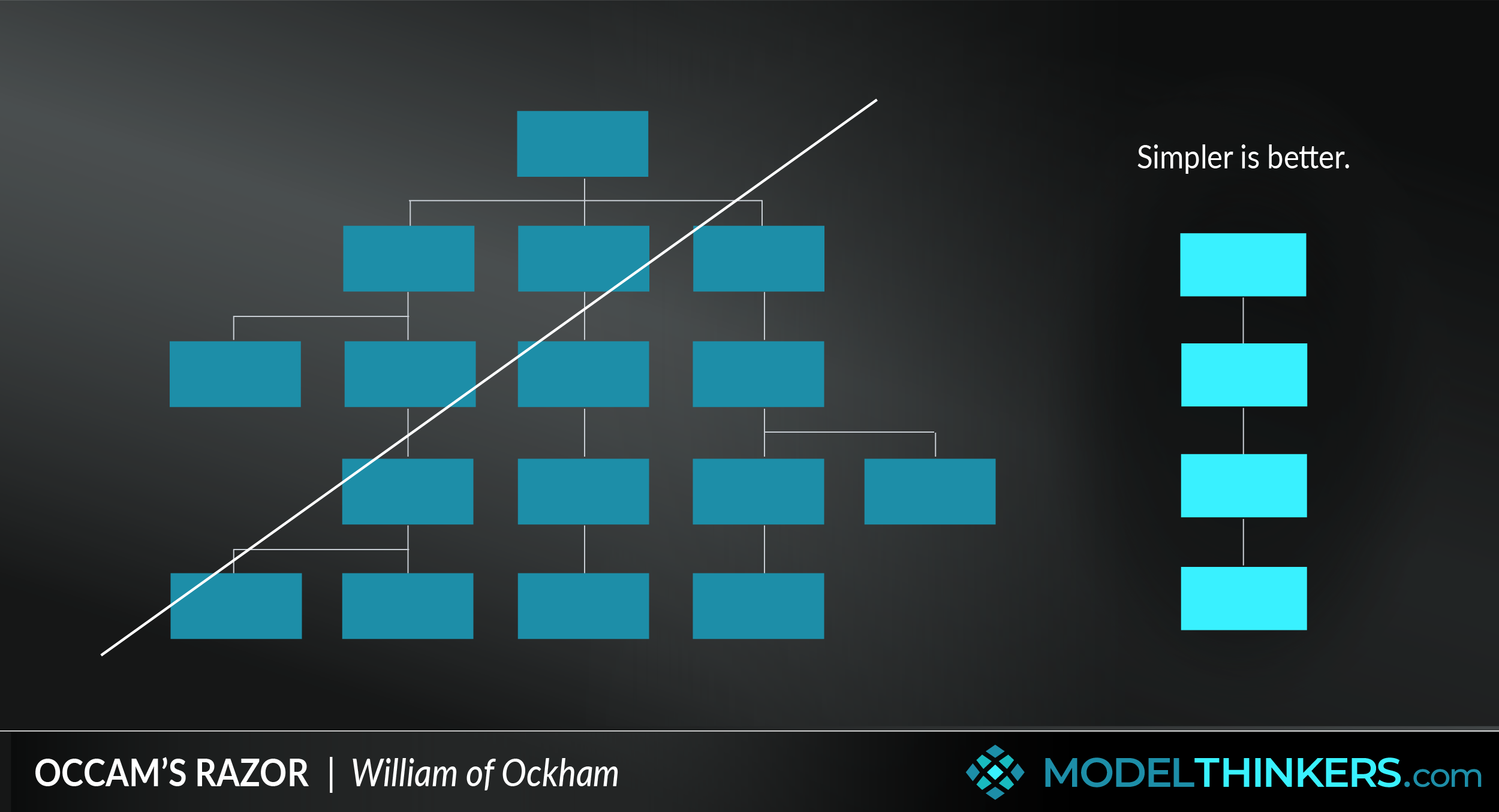 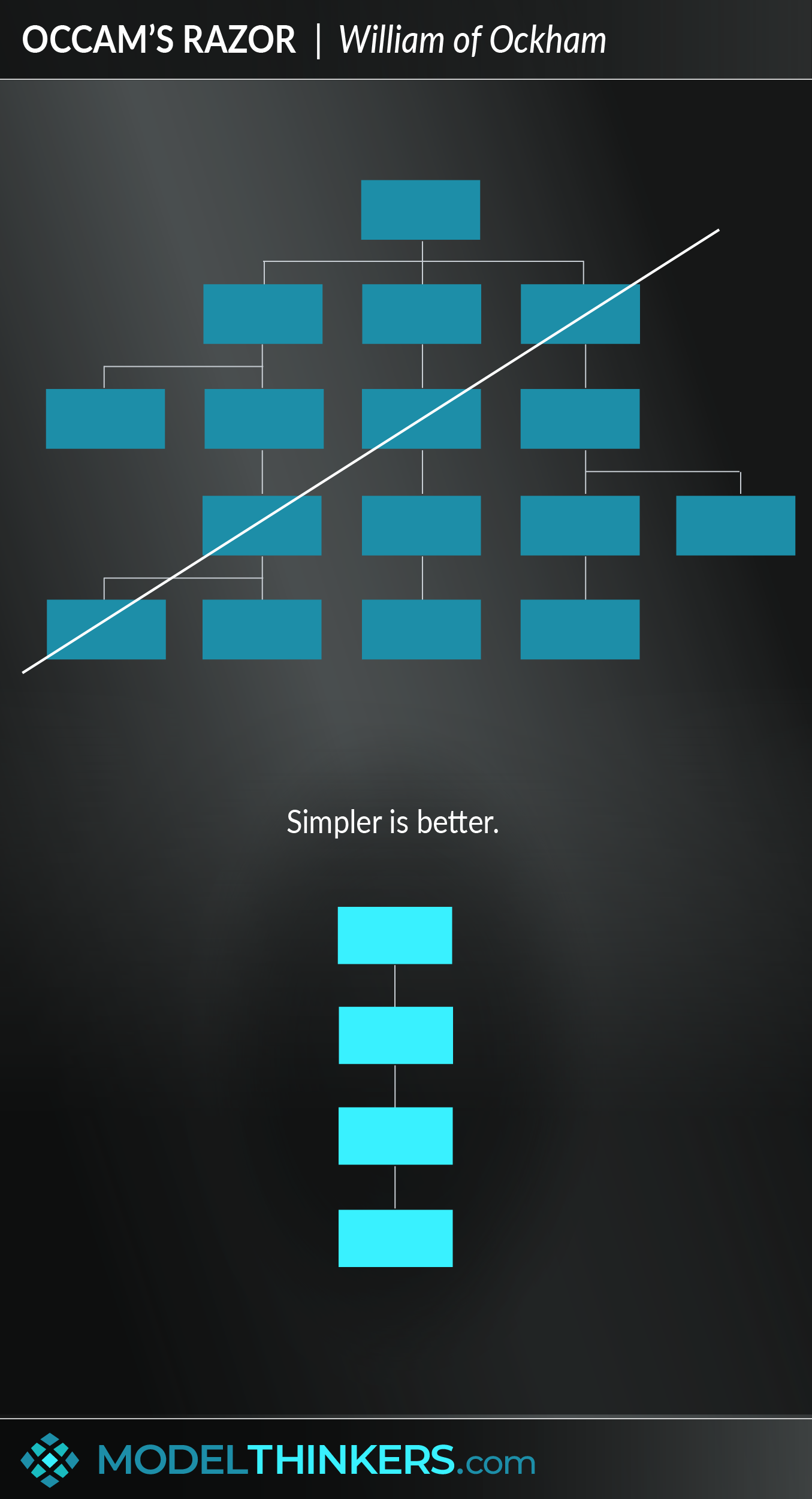 Use this mental model cut to the heart of a problem, the most likely explanation, and the base assumptions.

Occam’s Razor states that the simplest solution is generally the best one.

LOOK FOR THE FEWEST ASSUMPTIONS.

It’s a mental model that argues, when faced with competing hypotheses or explanations, the approach with the fewest assumptions is more likely to be correct.

Occam’s Razor serves as a reminder to cut through complicated narratives or explanations that you might be tempted to generate to explain an event and to instead lean towards the option with the fewest complexities.

This model has close affinities with First Principles and the Feynman Technique. Also, view Hanlon's Razor to see how this model can apply to social relationships and people that annoy or offend you. It could also be considered to be part of the Scientific Method, in terms of identifying and challenging your assumptions as part of testing hypotheses.

And, when Occam's Razor doesn't manage to cut complexity, you might consider Divide and Conquer to break down the problem; Probabilistic Thinking to consider the greys; and/or the Cynefin Framework to help navigate complexity. 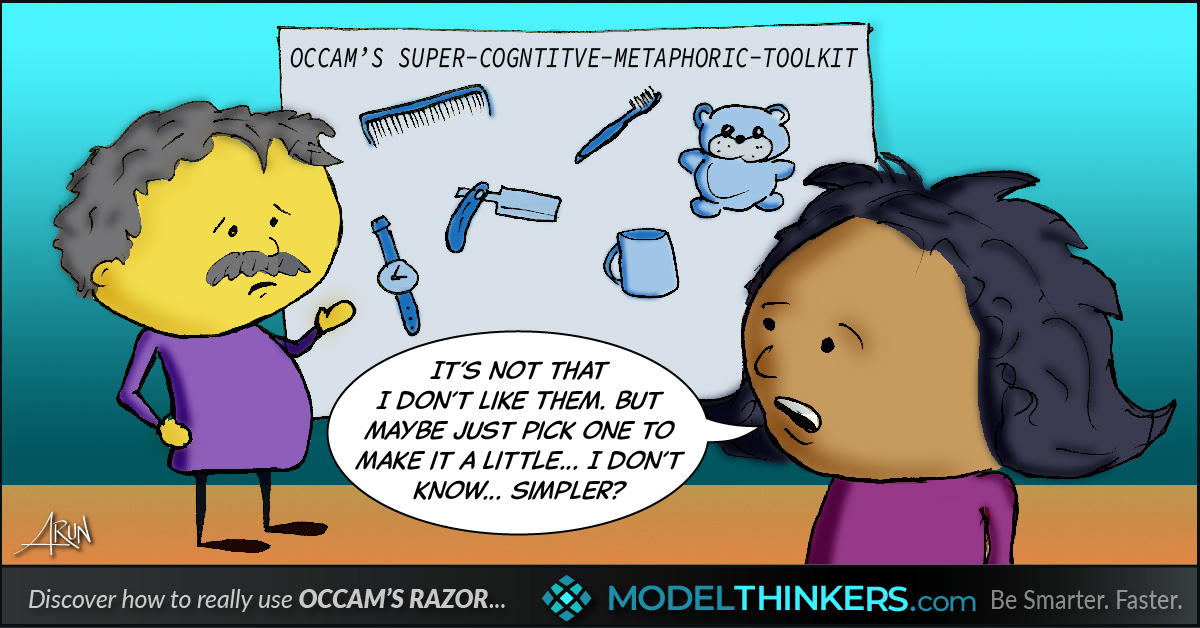 When considering several possible explanations, consider which one has more, or the most significant assumptions. Ask yourself if there are other explanations with fewer assumptions.

Keep It Simple Stupid. We couldn't resist referencing this classic mental model as a pithy reminder to help bring Occam's Razor to life.

This is another way of saying challenge your assumptions, but it's worth including. Ask yourself what do you truly know and can rely on to be true.

Explore More
Occam's Razor is featured in these playbooks:

5 Versatile Models to Get Started 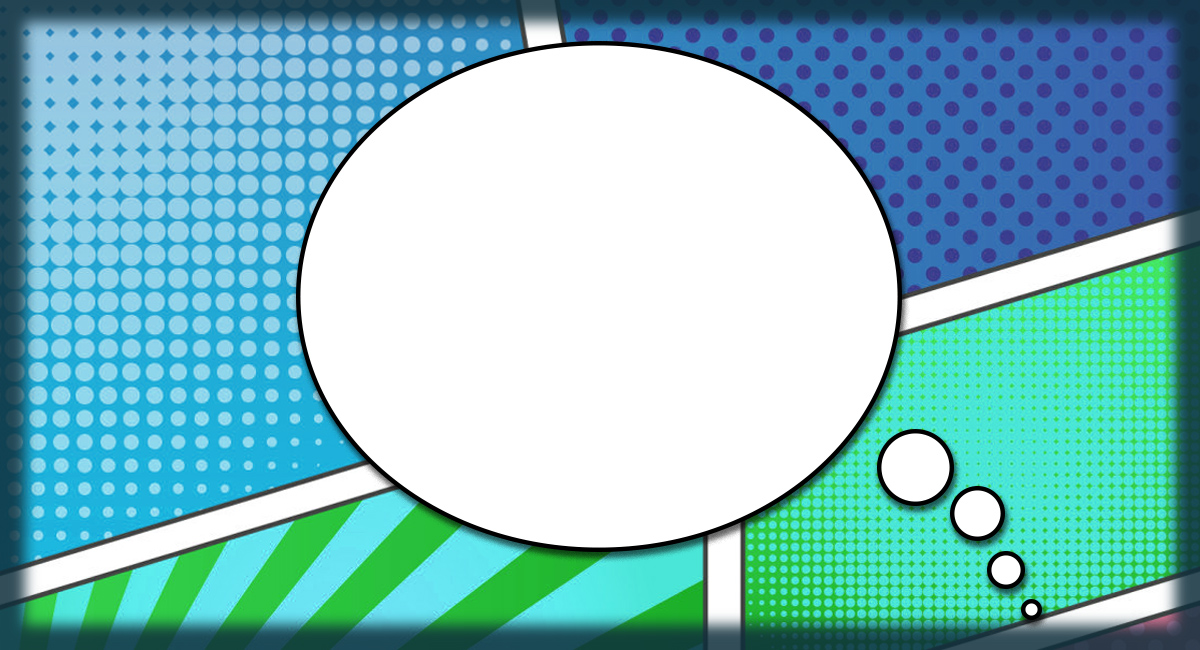 Another limitation lies in issues with complex, multi-layered causal factors that are the exceptions to this rule.

Testing hypotheses in the sciences.

Scientists regularly apply Occam’s Razor to identify the relative merits of opposing hypotheses. Generally, the hypotheses with the fewest assumptions will be favoured. There are examples of this being applied by Albert Einstein in the formulation of special relativity and Richard Dawkins to explain the functioning of natural selection.

Einstein's Constraint was an attempt by him to seek some balance in the model’s application, stating:  "It can scarcely be denied that the supreme goal of all theory is to make the irreducible basic elements as simple and as few as possible without having to surrender the adequate representation of a single datum of experience". This quote was itself simplified to a quote that is often attributed to Einstein, though not evidenced, of: “Everything should be kept as simple as possible, but not simpler.”

Occam’s razor is a versatile model that can be used in science or other domains to promote simplicity and working from fundamentals.

Use the following examples of connected and complementary models to weave Occam’s razor into your broader latticework of mental models. Alternatively, discover your own connections by exploring the category list above.

Occam’s Razor was developed by William of Ockham, a 14th-century Franciscan friar and proponent of logic.

View an in depth look at Occam’s Razor by Shane Parish on the Farnham St Blog here.