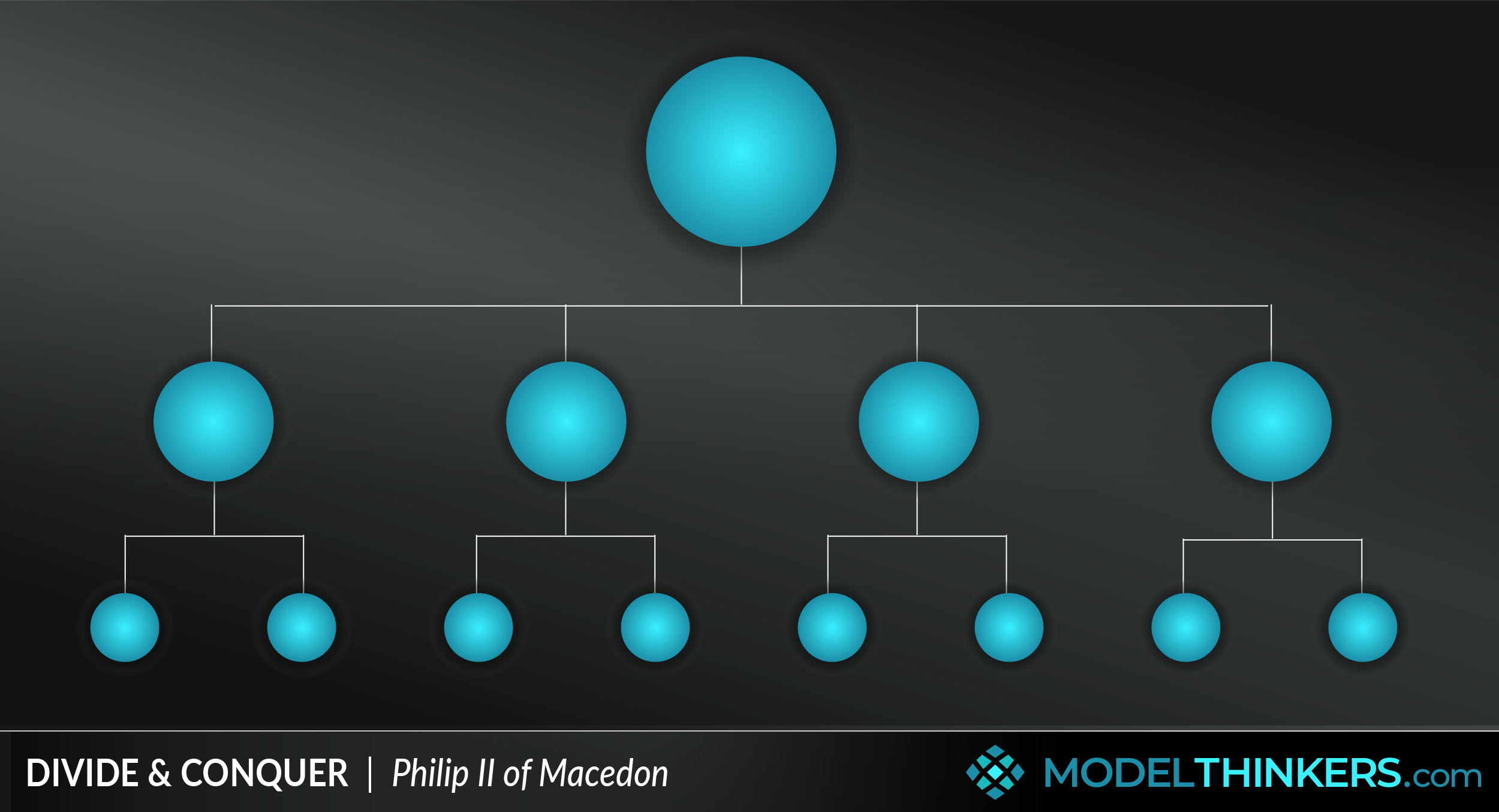 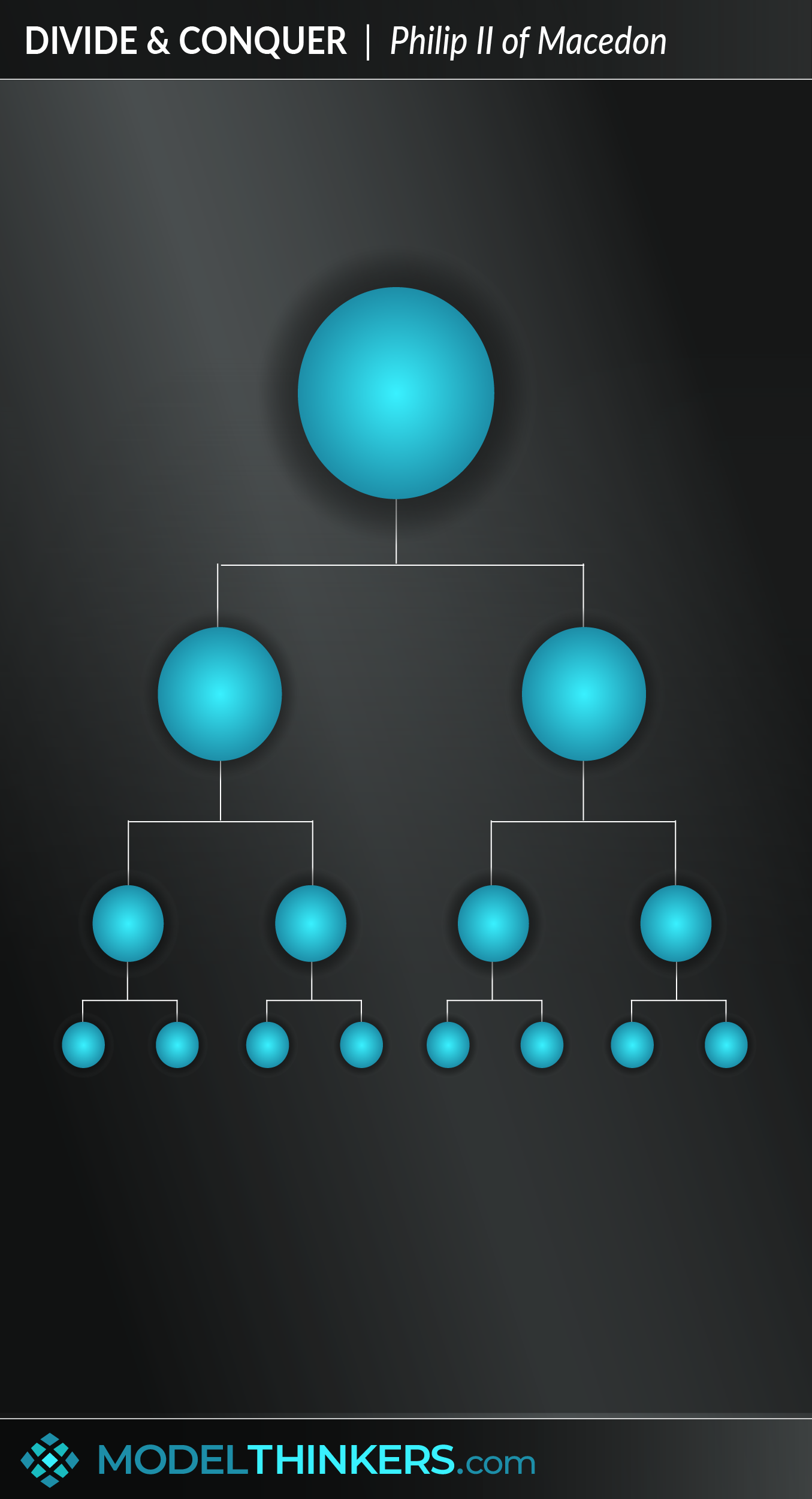 What do you do when faced with a seemingly overwhelming problem, project or force?

Divide and Conquer is a mental model that helps to break up a problem, power structure, or challenge in order to overcome it.

In a military context this model, also known as ‘divide and rule’, represents a strategy of dividing a large enemy force into smaller groups that have less power and can be controlled as a result. At worst, this might involve engaging with an opposing force to sabotage alliances, elevate minority groups to split them from the broader whole, and generally foster distrust between them.

Divide and Conquer has more positive applications in computer science as a recursive function that breaks down a problem into similar but smaller subproblems. Once these subproblems are solved their combined solutions will solve the original problem.

The mental model can be applied in decision making, problem-solving or project management to break down a problem into independent, manageable and related parts. For example, it might involve a business breaking up its focus into divisional responsibilities; a complex problem being worked through via a decision tree; or breaking a project into sub-tasks.

One specific application of this model in the consulting world is the MECE Principle developed by Barabara Pinto as part of Pinto's Pyramid. MECE involves breaking down subsets that are:

The aim is to identify independent 'buckets' of work that, together, address the whole. That said, sometimes divisions are purposely made with overlaps and clearly stated dependencies.

Applying Divide and Conquer in its military context to a power base of people tends to be unethical and short-sighted. In a management context, some immediate gain might come from dividing power blocks or creating a culture of uncertainty where employees must compete from fear. However, in the long term, this will result in distrust and anger.

Divide and Conquer in the workplace is an identified strategy of corporate psychopaths by Clive R. Boddy via the corporate psychopath research association. When you identify it, it’s important to call it out and act against it. This might include developing trust-based relationships to maintain positive working relationships even when certain leaders might be encouraging distrust.

The approach can be viewed as three steps: divide (dividing the problem into sub-problems), conquer (solve the sub-problems), and combine (combine solutions to determine the solution for the original problem).

The base case is the point where you cannot break the problem down any further. In practical terms, this involves understanding when a subproblem is at a practical and manageable state to solve for.

Use MECE as a reminder to separate and address the whole where that is useful.

Explore More
Divide and Conquer is featured in these Playbooks:

The post office methodology originally sorted mail into separate bags for geographic locations, then each of these bags were sorted into smaller sub regions, then broken down again until they were delivered.

We referenced this example in the takeaway section. Refer to the corporate psychopath research association website for more information on how Divide and Conquer is used in the context of conflict and bullying.

In a global political context, Divide and Conquer was used by a range of imperial powers including the British in the Indian subcontinent. They used a range of tactics that played into this strategy including encouraging conflict between Indian states and working to avoid a united India.

Laws that protect whistleblowers could be seen as a Divide and Conquer approach by governments to splitting employees from their organisations to report wrongdoing.

The obvious limitation of this model when applied to political power has been touched upon in references to psychopathic behaviour above.

In the context of problem-solving, the most common limitations of the model involve the complexity of problem decomposition, having multiple stacks of sub-problems which decrease efficiency and add further layers or challenges. Another risk lies in creating sub-problems that don’t capture the complexities of the whole problem and lose the big picture nuances involved.

Divide and conquer is a versatile mental model that can be applied to problems, challenges and tasks alike.

Use the following examples of connected and complementary models to weave divide and conquer into your broader latticework of mental models. Alternatively, discover your own connections by exploring the category list above.

The original divide et impera principle that lies behind the mental model of divide and rule from a military context, has been used in politics since Ancient times and has been attributed to Philip II of Macedon and used by Julius Caesar and French emperor Napoleon. 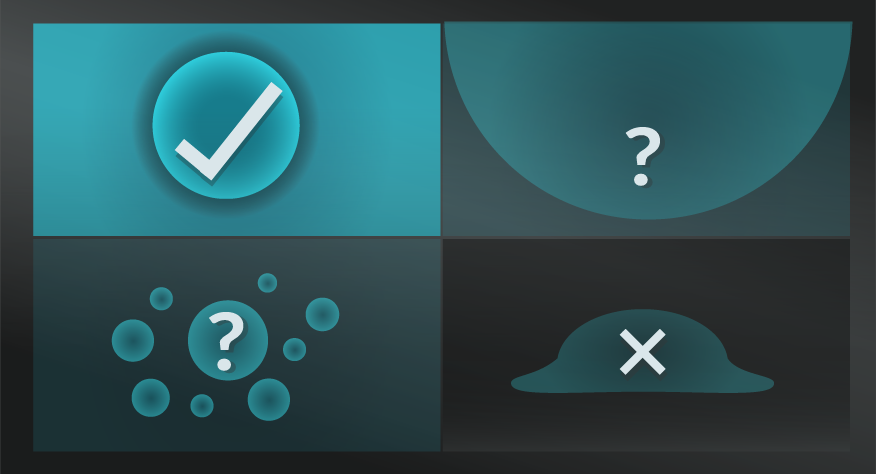