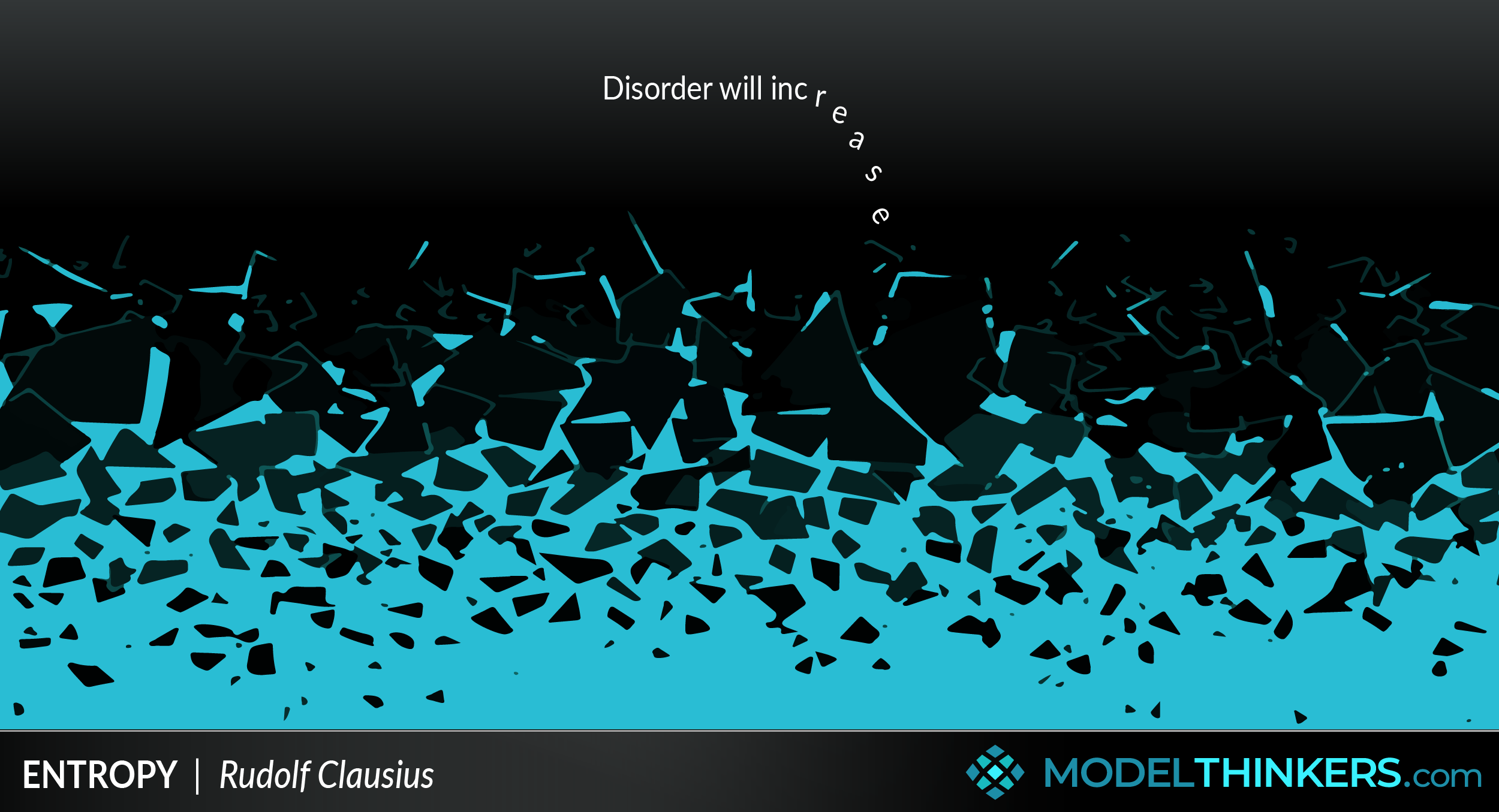 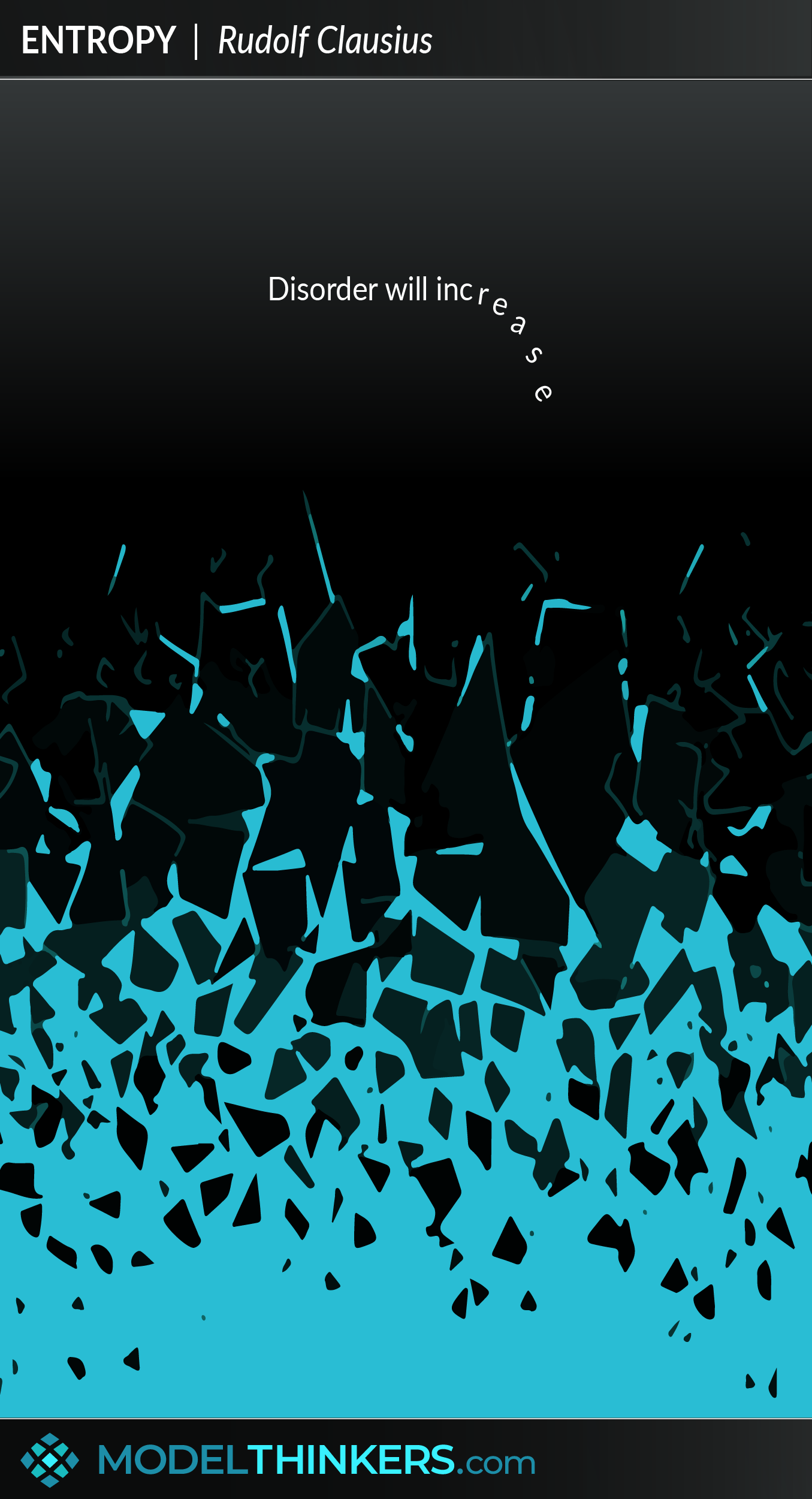 When applied broadly, an understanding of Entropy and The Second Law of Thermodynamics helps explain the passage of time, why the universe will end, and why your house is such a mess.

In simplest terms, The Second Law of Thermodynamics states that Entropy, or the level of disorder in the universe, will increase over time.

Thermodynamics is the study of heat and energy, particularly examining how such energy moves around a system — whether that system is your body, the weather, or the universe. The First Law of Thermodynamics, also known as the Law of Conservation, states that energy can not be created or destroyed. Rather it’s transformed from one form of energy to another.

My initial definition of Entropy referred to ‘disorder’ because that’s the easiest, and arguably the most practical takeaway for this model. To be more accurate, The Second Law of Thermodynamics states that unhindered energy will tend to disperse. Entropy is the measure of that process, describing how much energy has moved from a localised to a dispersed state. Importantly, the tendency towards dispersal or ‘disorder’ becomes the default state as a simple matter of probability.

Think of a sandcastle on a beach. While it's theoretically possible for the water, wind and sand to spontaneously form a castle — it's ridiculously improbable. The default and more probable state of the sand will be to spread randomly over the beach. A sandcastle can be consciously built by expending energy to bring order to the disorder, and it will continue to blow away and disperse, even as you're building it.

WHAT THIS MEANS IN THE UNIVERSE.

Steven Pinker, Psychologist and Author, described this tendency towards dispersal: “Closed systems inexorably become less structured, less organized, less able to accomplish interesting and useful outcomes, until they slide into an equilibrium of grey, tepid monotony and stay there.”

This explains why heat flows from hot to cold; why gasses naturally expand to fill a space; and why the universe will likely keep expanding until its eventual ‘heat death’ (don’t worry — you, and the robot overlords that enslave your great-great-great-grandchildren, will not be around to experience the heat death of the universe).

Speaking of time, Entropy is also used to explain the passage of time using the Arrow of Time model. Essentially, the asymmetric nature of Entropy and the fact that disorder is increasing distinguishes the past from the future.

WHAT THIS MEANS FOR YOU.

Entropy can serve as a reminder that nothing remains constant and that there will always be a tendency towards disorder and decay, increasing over time. Indeed disorder is the default, and any form of order must be created through further energy investment. Here’s what that might mean for you:

THE CASE FOR OPTIMISM.

At this point, you might be slipping into a science-driven existentialist crisis. Alternatively, you might be taking a wide-eyed and even optimistic view of Entropy and The Second Law.

Here’s Pinker again: “Why the awe for the Second Law? The Second Law defines the ultimate purpose of life, mind, and human striving: to deploy energy and information to fight back the tide of entropy and carve out refuges of beneficial order. An underappreciation of the inherent tendency toward disorder, and a failure to appreciate the precious niches of order we carve out, are a major source of human folly.”

His quote is a reminder that we can embrace these models and, when applied to business unlike in physics, know that you can manage and even reverse Entropy. Understanding this model also encourages you to be more selective about where and how you apply energy to create ‘niches of order’ in a sea of disorder. See the Actionable Takeaways below for more.

How do you navigate Entropy and apply your understanding of it? Use Feedback Loops to help maintain the status quo or create more order (with more energy). Examples of this include Double Loop Learning and/or Black Box Thinking.

Defying Entropy in large, established organisations is a challenge addressed by Jeff Bezos’ Day One approach as described in his High-Velocity Decision model.

You can use this model to challenge your view of Activation Energy as a one-off burst of energy, instead reminding you for the need for ongoing energy. Entropy can also be seen in the light of the Red Queen Effect, where competition drives the need for constant reinvention, and Creative Destruction, where the seeds of new ideas are created from within old, declining systems.

Viewing the world with an understanding of Entropy means that you see any construct — such as products, businesses, relationships — as ‘artificially created parcels of ordered energy’ and that you understand that energy will naturally seep away unless more energy is injected to fight their natural decay.

Whether its a team, product, career or relationship, think in terms of different stages and understand the pull towards disorder. There is no ‘set and forget’ with Entropy – everything is an ongoing process that, left to its own devices, will likely deteriorate.

Knowing that Entropy will lead to a pull towards disorder and even decay, plan for how you might draw on energy sources to counter this. This might be a cadence where you seek external support, restructuring, or adding new external factors to ‘shake things up’ and provide new life. And consider how you can sustain this process to be ongoing.

An alternative to establishing an ongoing investment plan is to establish an exit plan — or a means that you can remove yourself from a business, or retire a product, in a way that works for you. You are essentially pre-empting Entropy and making a plan that maximises your returns and provides you with a way out rather than continually having to reinvent or support it.

One way to identify and counter the impacts of Entropy is to simplify and reduce the amount of ‘moving parts’. A disordered complex system is harder to counter than a more straightforward system facing a natural pull towards disorder.

Rather than trying to fight the entire flow towards Entropy, identify the most valued areas where you wish to invest energy and that will give you the biggest gains — whether it be in terms of business, work or life. You might want to consider models such as the Pareto Principle to achieve this.

Consider established systems, businesses or products and, with your understanding of Entropy, ask what is at risk of falling into disorder and what opportunities lie within those risks. Embracing a world of constant change and viewing seemingly unmovable objects within that perspective, will provide you with an advantage moving forward.

Explore More
Entropy is featured in these playbooks: 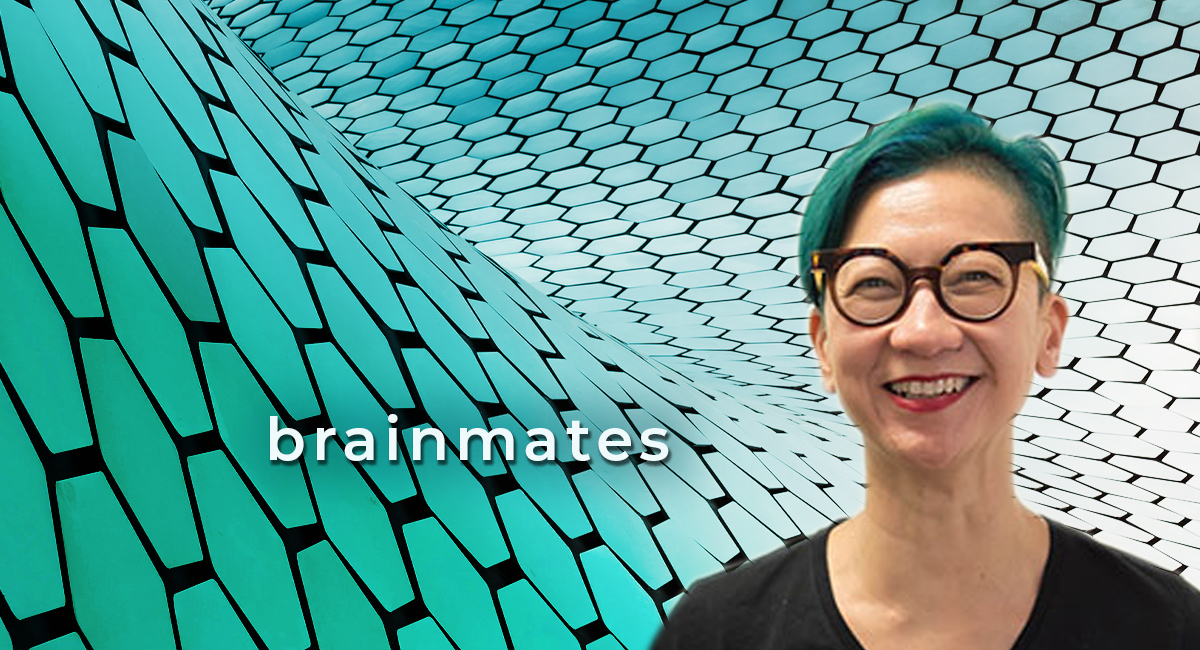 The Art of Product Management

From a scientific point of view, there are some supposed challenges to The Second Law from quantum physics — but to be honest, I still don’t understand those challenges and the associated ongoing debate, which you can explore more in this 2017 Scientific American article.

In truth, I find a more interesting exploration of limitations via how you might use these models as a guide in your broader work and life. From that perspective, you might consider how the application of this model assumes that things decay, rather than change. That is, when applied to businesses, products, or relationships, rather than assuming decay, it might be more useful to assume change — that those elements will continue to evolve and shift which might or might not result in greater disorder. Though the pull towards disorder is still a compelling explanation for countless situations.

It’s no coincidence that The Laws of Thermodynamics arose during the Industrial Revolution and the birth of the steam engine. The steam engine, at a basic level, has three components — a hot energy source (steam); a device that converts that heat energy into movement (pistons); and a vent that extracts energy that hasn’t been used as heat (a cold sink).

The need for the cold sink demonstrated that when heat was converted to movement, some of the heat was transferred into the system’s surroundings. This was an indicator that for energy to move from a high-temperature body to a low body one that work, or additional energy, was required.

Imagine an ice sculpture of a swan sitting in an ocean. The sculpture might have incredible detail and artistry, meanwhile, the water around it has undefinable depths. Which do you think has more Entropy?

If you answered with the ocean, you’d be right. The ice sculpture is an ordered and defined object in comparison to the dispersed, random, and dare I say ‘disordered’ state of the water molecules in the ocean. The Second Law of Thermodynamics tells us that, without intervention, there is a greater probability that water molecules will organise themselves in the form of an ocean than that of an ice sculpted swan as a result.

A common analogy to explain Entropy is that of your messy bedroom. There are more ways your bedroom can be messy, than ways it could be clean and ordered. In that sense, your messy bedroom has high Entropy, and the Second Law would imply that it will tend towards that state if left unchecked.

As described in the In Practice section, the field of Thermodynamics was born from the Industrial Revolution and the invention of the steam engine. As with all such ideas, there were many contributors to the field, but French physicist Sadi Carnot was certainly seen as one of the leading thinkers in the space. His discussion of ‘thermodynamic efficiency’ was far ahead of its time.

Rudolf Clausius, working independently in the early 1850s, posited similar ideas after examining how heat from a heated body would flow to one of a lower temperature. He laid the groundwork for the Second Law by explaining: “heat does not pass from a body at low temperature to one at high temperature without an accompanying change elsewhere.”

The origins of these models are generally attributed to Clausius, though it could be rightly argued that Carnot had just as much, if not more, right to claim the mantle.