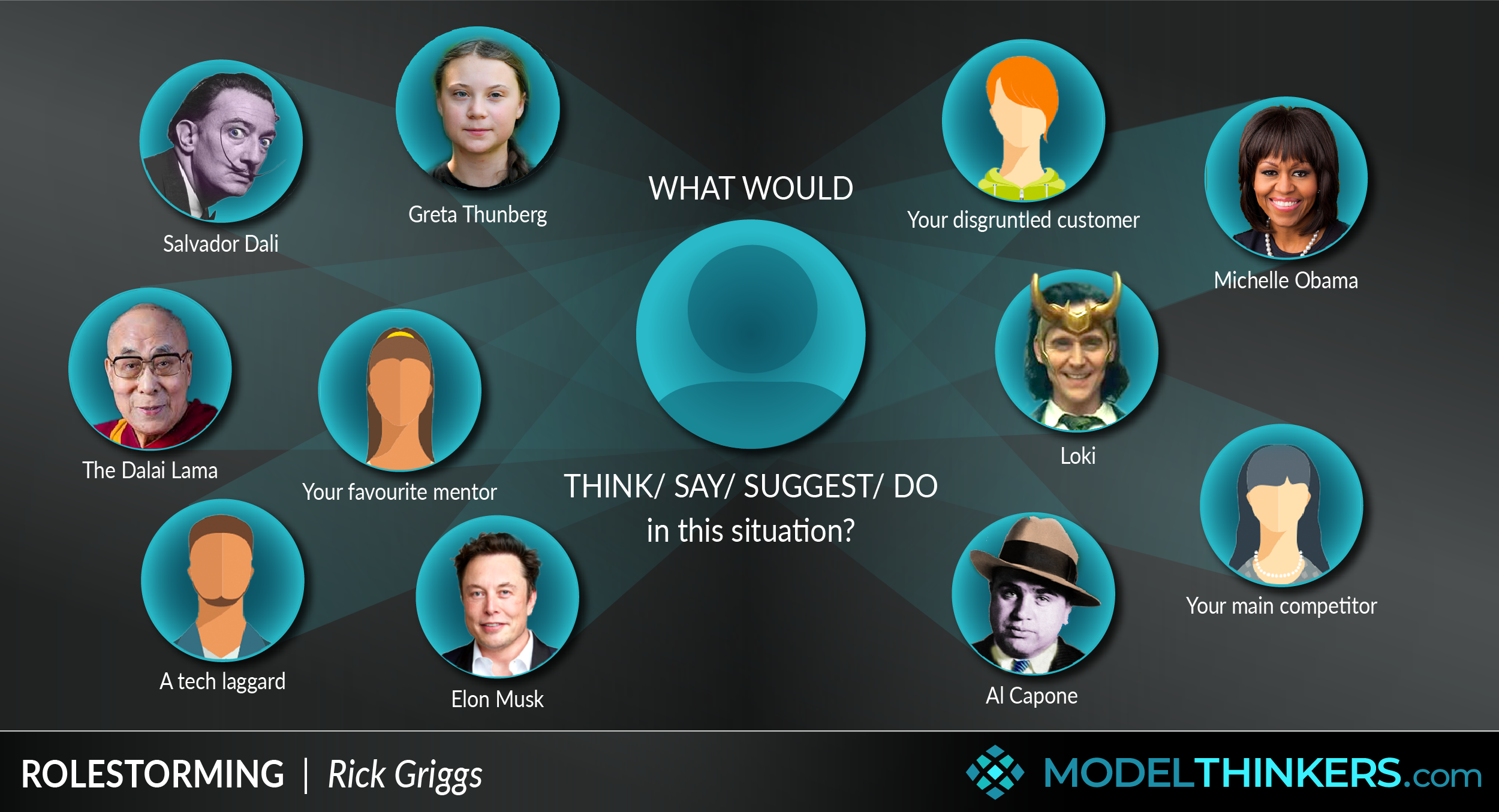 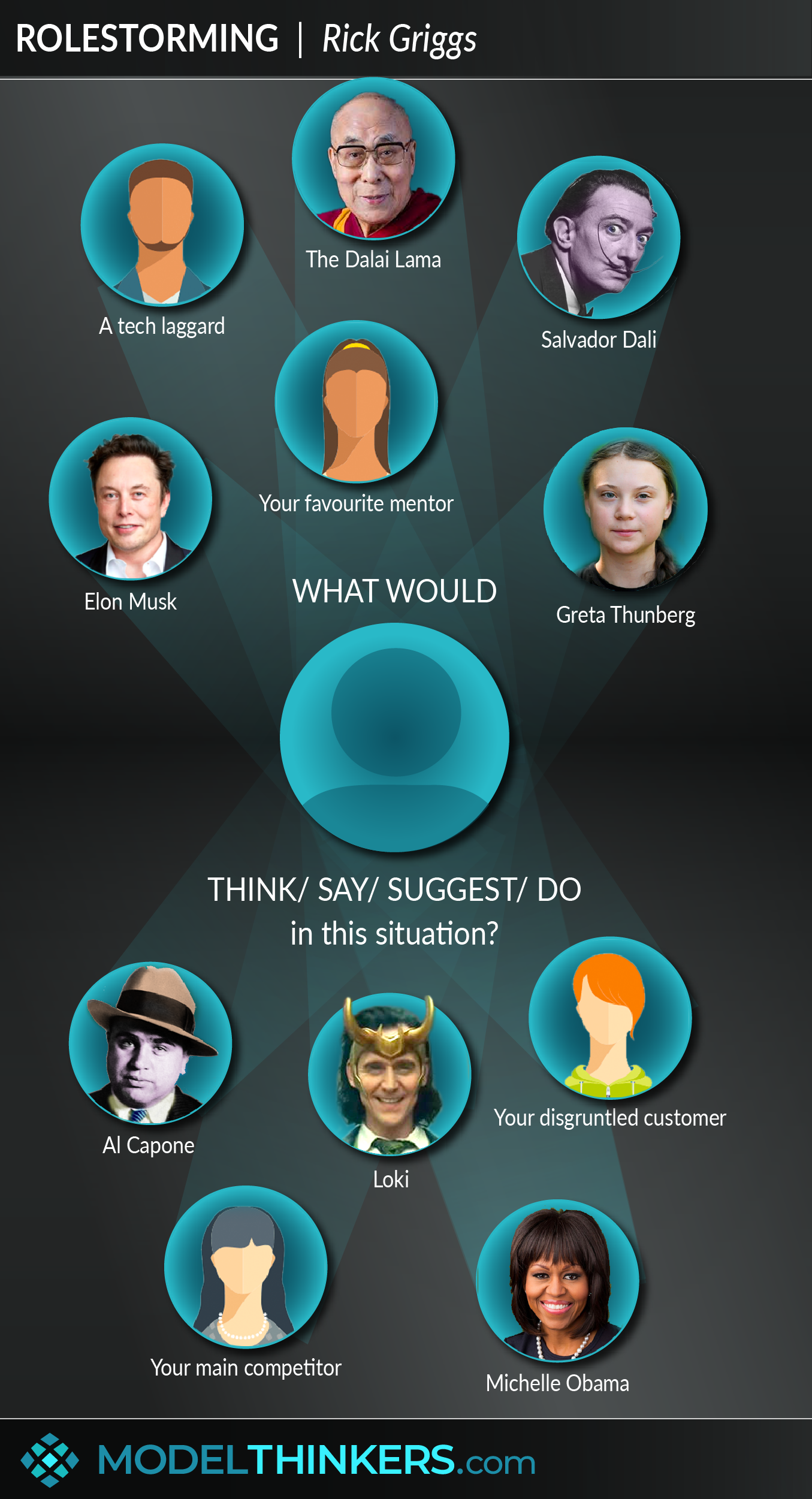 What do you get when you combine brainstorming with roleplays?

Rolestorming involves asking what would <another person> think/ say/ suggest / do in this situation? Use it to change perspectives, drive innovation, and/or embed lasting habits.

Rick Griggs developed this approach in the 80s while encouraging capable professionals to come up with business-improving ideas. Griggs found that the switch to Rolestorming from traditional brainstorming empowered people to “decrease the fear, increase the fun, and expand the focus.”

In other words, by taking on other roles, or personas, people felt less inhibited and more able to share things that they might otherwise feel nervous about. Find out more about Griggs' story and books in the Origins section below.

When choosing a role to Rolestorm, be aware of your assumptions and simplified view of that role. Ask basic warm-up questions such as how do they see the world? What drives them, or is important to them? What unique view do they bring to the problem? You might want to go further and actually create a Persona or Empathy Map for them, but often that’s unnecessary for a quick Rolestorming exercise.

We’ve chunked example roles that might be useful under three main categories to help get you started:

Though Griggs developed this model as a creative tool, we're all about looking for connections and greater impact — so we recommend using Rolestorming in conjunction with the notion of ‘Identity-Based Habits’ discussed by James Clear in his book Atomic Habits.

Clear describes self-identity as a key predictor of behaviour and crucial when embedding habits.  He argues that you can change your deep-held views of identity by building a body of evidence (for yourself) that you are ‘the sort of person’ that would take different actions.

Concretely, you might want to embed more healthy choices in your life. To do this you can take a prompt from Rolestorming and regularly ask ‘what would a fit and healthy person do in this situation?’  You'd ask that as you choose stairs versus lift; organise your dinner plan; reject an invitation to have a smoke etc. As you try to mimic the behaviour of a fit and healthy person, you will build up evidence and eventually be able to say (and believe) ‘I am a fit and healthy person,’ embedding this new identity as part of you, resulting in healthy habits flowing more naturally as a result.

Rolestorming is a creative problem-solving technique that can be understood in the context of Framing and plays well with Framestorming and Inversion. It could be argued that Rolestorming supports a level of Psychological Safety, at least in an immediate sense, by providing the freedom to speak through other’s voices, essentially expressing opinions through a protective shield.

Consider using Rolestorming with Personas, Empathy Maps, and Journey Maps. You can even break out of the Persona approach by combining it with Jobs To Be Done.

Ask what would <another person> think/ say/ suggest / do in this situation? Use Rolestorming as a group ideation technique or to reframe a problem for yourself. Use the table above as a starting point and quickly define the person’s worldview and unique perspective before applying it to your current problem.

Beyond innovation, consider how you can challenge and shift your self-identity by asking ‘What would a x person do in this situation?' Where x might be a person who is healthy, funny, creative, ethical, empathetic, or any attribute you want to improve in yourself. Acting from that place will build up your evidence that you are ‘that sort of person’ and allow identity-based habits to take root.

Explore More
Rolestorming is featured in these playbooks:

We’re going to say the obvious out loud — when Rolestorming, beware of stereotypes and two-dimensional representations of groups that are offensive. If you have to, ask yourself ‘what would someone who is sensitive to other people’s opinions and experiences think about this?’ before you launch into a potentially offensive Rolestorm. This is particularly the case when you stray into politics, religion, gender, sexuality, and race.

Beyond that, the main limitation of Rolestorming is related, in that the perspective you take will not be fully formed or well researched. This might work if you’re just trying to shake things up but an ‘Oprah’ or ‘Elon Musk’ but, if you’re trying to take a customer or audience segment view, beware of simply falling into simplistic assumptions and views of what they feel, think and would do.

A form of Rolestorming is often integrated into Personas and Journey Maps, with product developers often asking ‘what would x think about this?’ for any new feature or priority conversation. Such applications are usually built on relatively robust Persona development, often combining both qualitative and quantitative data rather than the ‘impression’ approach that will be more common when Rolestorming is used as an ideation technique.

Rick Griggs developed Rolestorming in the 1980s while working in Silicon Valley with companies such as Intel, where he worked as a productivity manager and eventually a training manager. He has talked about his practice of gathering highly capable professionals together to help solve problems in the business but that after a short brainstorming session they would say they were out of ideas. His initiative to start combining with roleplaying allowed them to continuously generate ideas, particularly by reducing the fear of looking stupid or making silly suggestions.

He has since devoted much of his energy to the space of personal development and has published a range of books including The Road to Optimism and Triumph in Teams.

Read James Clear’s article on Identity-Based Habits with the perspective of using Rolestorming for personal development and change.