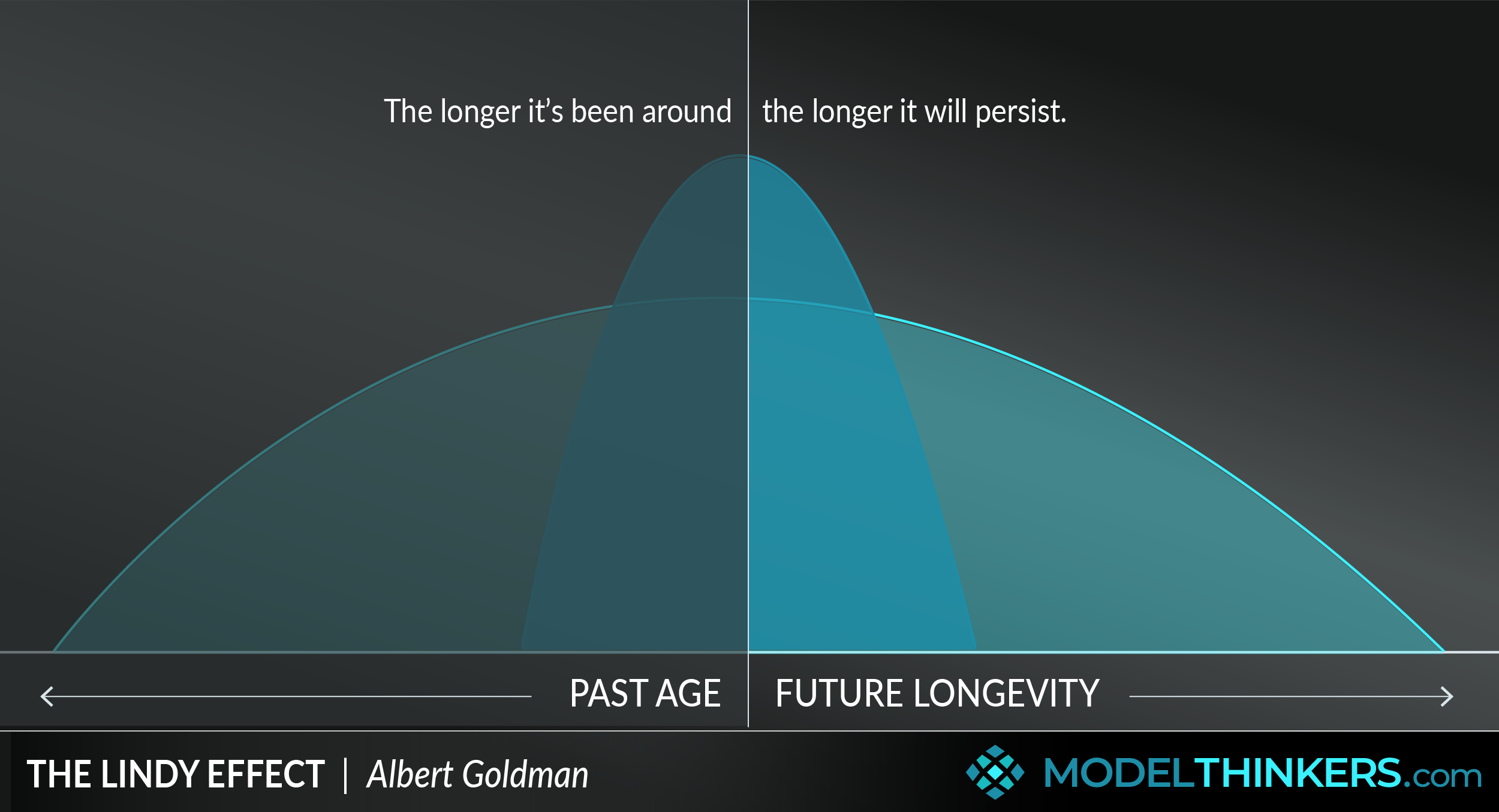 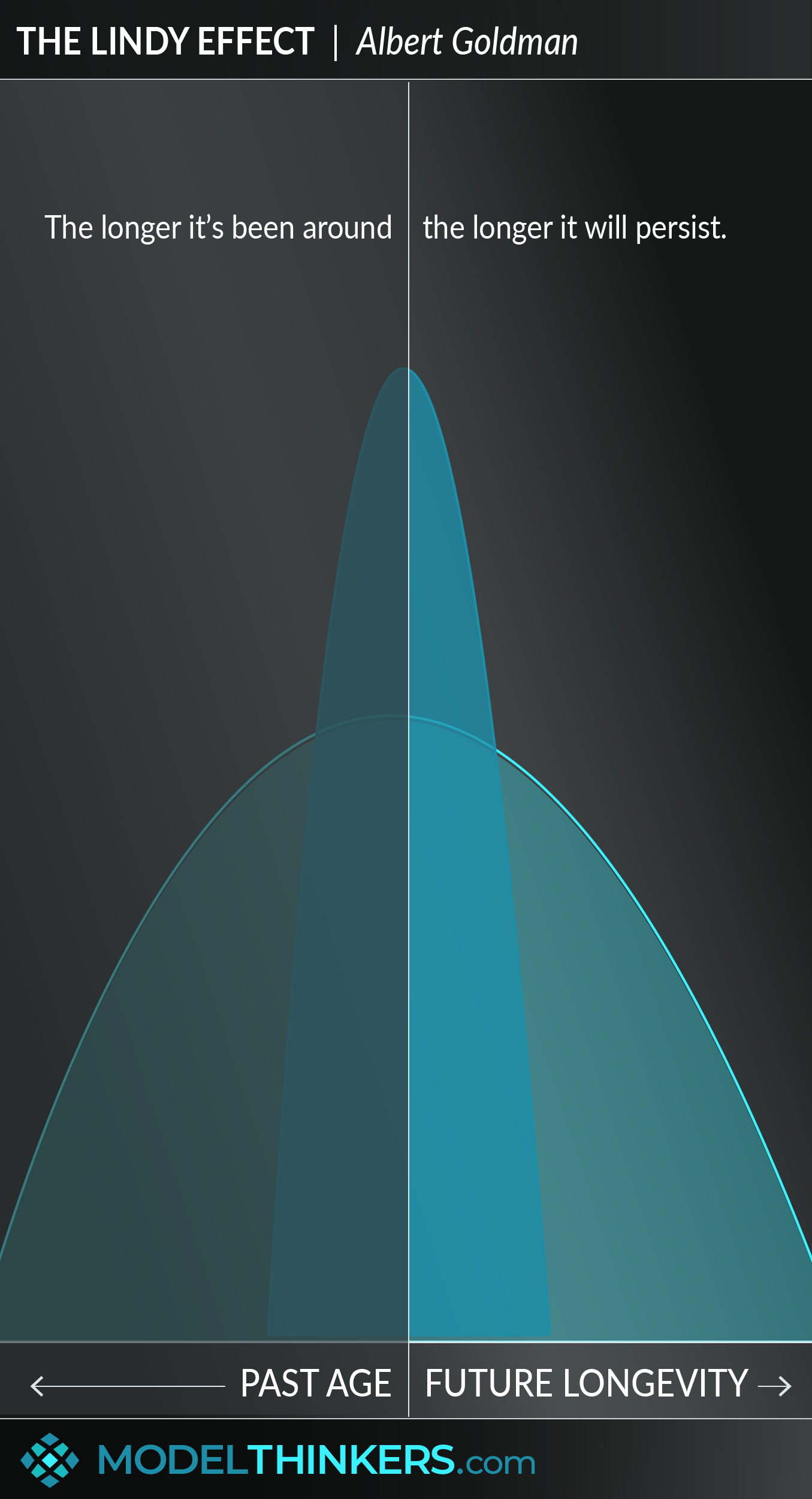 "Use laws that are old, but food that is fresh." – Periander of Corinth.

This quote from 500 BC captures The Lindy Effect which is a reminder that the classics are classics for a reason.

The Lindy Effect essentially states that the longer a non-perishable item has been around, the longer it’s likely to persist into the future.

The Lindy Effect was named after a New York deli and originally referenced the career prospects of comedians — see Origins below for more. The definition was since broadened so that today The Lindy Effect states that the future life expectancy of a non-perishable item is proportional to its current age. It reflects the common adage that things that have stood the ‘test of time’ are things that you can rely on.

The effect does not relate to perishable or living items that experience natural decay — so, if you're hitting your nineties, the sad truth is that your life expectancy is very limited. Instead, the model refers to non-perishables such as technology, books, businesses and ideas.

This model serves as a useful prompt to take a big picture view of trends and change. It can be challenging to understand the implications or complexities of a new trend as it is unfolding but, over time, you'll be able to understand it's potential and impact.

Nassim Taleb, the author of Antifragile, captured this model well:

"This, simply, as a rule, tells you why things that have been around for a long time are not “ageing” like persons, but “ageing” in reverse. Every year that passes without extinction doubles the additional life expectancy. This is an indicator of some robustness. The robustness of an item is proportional to its life!"

Whether you're exploring bitcoin versus gold, or electric versus gasoline engines, applying the Lindy Effect will encourage you to 'wait and see', because with each year a 'newcomer' survives it implies a proportionate increase in its longevity. In other words, new initiatives become less fragile with every year they persist.

The Lindy Effect is a useful reminder to respect the momentum of past trends and attitudes. You can combine it with the Overton Window to better understand change versus inertia in politics, or with Moore's Law to consider what will change and what will not in the context of rapid technological innovation.

As counters to this model, you might want to contrast it to Entropy to better understand the universal pull towards disorder, and Creative Destruction to identify opportunities for radical disruption from within current systems.

Watching the daily news is useless and even harmful if we consider the Lindy Effect. Events that are important and newsworthy will continue to be covered in weekly or monthly publications, while daily news tends to ignite our emotions and prevent us from focusing on things that matter

New does not exclude quality, but if a book has been around for more than 20 years and continues to be referenced and printed today, then it most likely is valuable work that will have a continued future.

Applying this model to your life means relying on long term emotions and values when monitoring your well-being and making personal decisions. That is, consider what has persisted for you in the past and consider that for your future decisions.

The Lindy Effect does not seem to consider the reality of a disruptive, volatile world. Particularly with the rise of digital disruption, it seems that once well-established businesses, ideas and technologies are often becoming obsolete at an accelerated rate.

That said, a counter-argument might say that new disruptions still often reference longstanding classics. Star Wars was like no movie that came before it, but it still heavily referenced Westerns as a classic genre, Post-Modern architecture often referenced long-standing cultural designs and so on.

The Lindy Effect was coined by Albert Goldman in 1964 when discussing the outputs of comedians. He named his law after a famous New York deli where comedians would gather after their shows. He argued that the professional life expectancy of a comedian was inversely proportional to their exposure in the medium.

This recent article in Forbes explored lessons when applying the Lindy Effect to Bitcoin. On one hand, when compared to gold, bitcoin did not shape up well as an attractive investment. As explained in the article:

"Gold has been used as a store of value throughout history. Bitcoin can’t claim that, and indeed following the Lindy Effect it would be many centuries before it may be able to claim even close to the track record of gold as an investment. With each year that passes, Bitcoin becomes a more credible investment, though it still has some way to go when compared to more established assets."

Burn-in is the process of exercising a component before it is embedded into a system. This both tests the component and begins to test its longevity according to the bathtub curve, a mental model from reliability engineering.

Use the following examples of connected and complementary models to weave the Lindy effect into your broader latticework of mental models. Alternatively, discover your own connections by exploring the category list above.

The origins of this idea began with Albert Goldman who coined the term ‘Lindy’s Law’ in this 1964 New Republic article. It was named after a New York deli in relation to the professional life expectancy of comedians. The article explains:

"The life expectancy of a television comedian is proportional to the total amount of his exposure on that medium."

The idea was adapted and refined to become the Lindy Effect by mathematician Benoit Mandelbroit.

For an introduction to the Lindy Effect and more on the fragility and antifragility theory, read Nassim Nicholas Taleb’s book Antifragile: Things That Gain from Disorder.