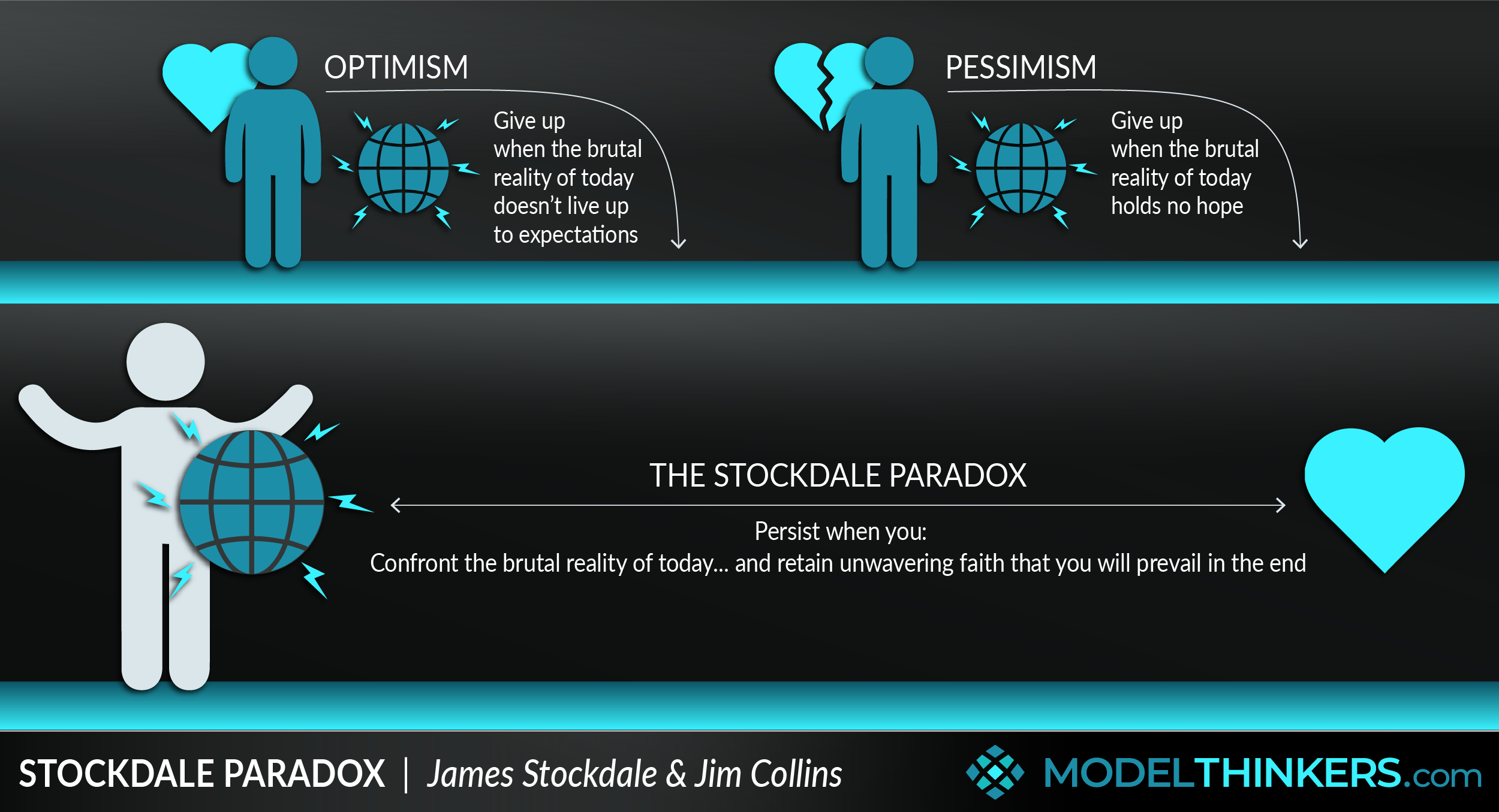 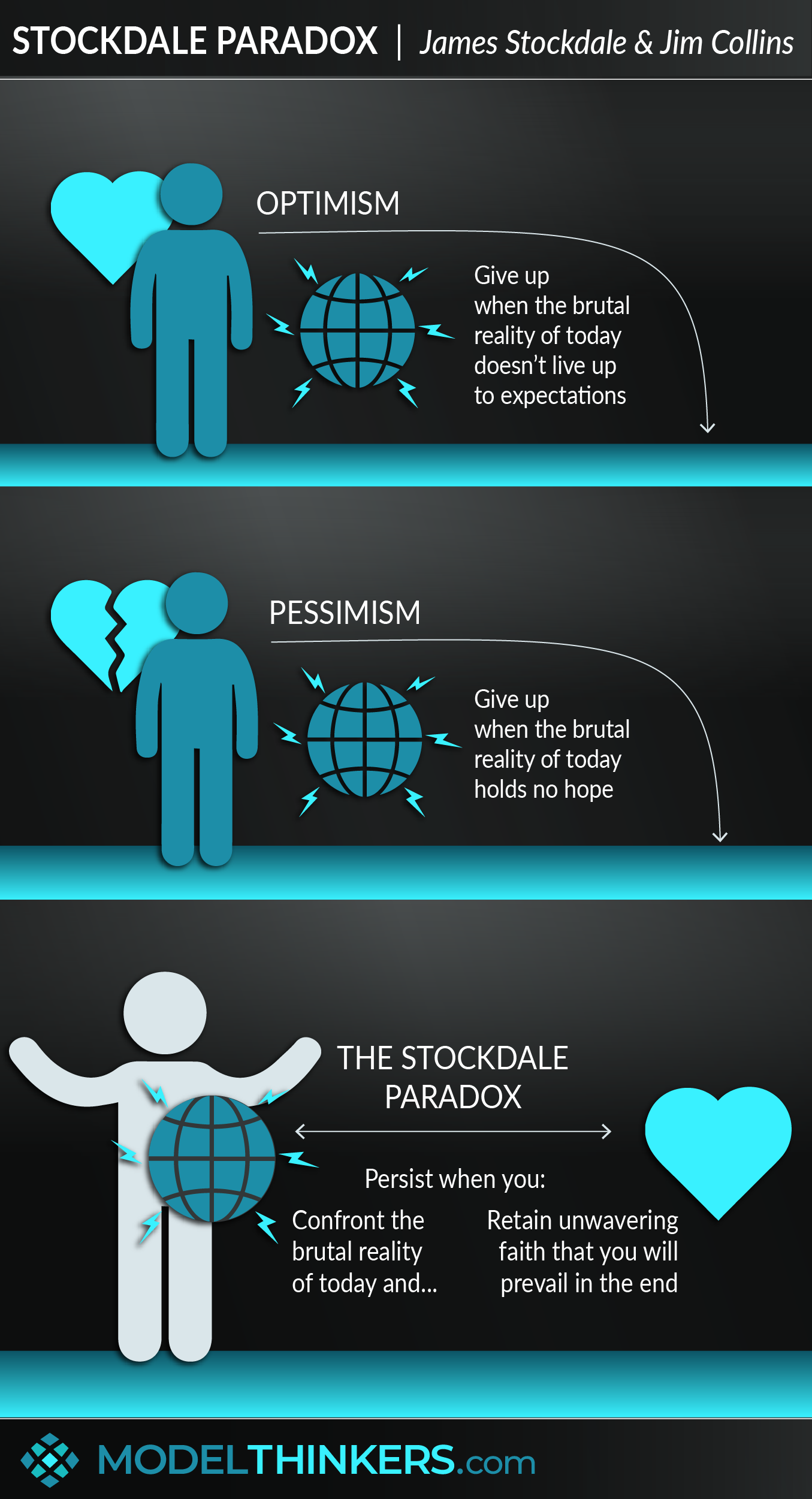 Inspired by Admiral James Stockdale’s survival of horrific conditions in a North Vietnamese prisoner of war camp, this model was popularised by Jim Collins as a central lesson for successful business.

The Stockdale Paradox is a technique to navigate challenging and ambiguous times by combining the ability to confront the brutal facts of your current reality, even as you maintain unwavering faith that you will prevail in the end, no matter how distant that is.

PERSISTING THROUGH PAIN AND UNCERTAINTY.

Stockdale’s story is extreme. His plane was shot down as he led a raid into North Vietnam and, even as he ejected and parachuted into enemy territory, Stockdale told himself that he would be there for at least five years. In fact, Stockdale’s imprisonment lasted over seven years, during which he was repeatedly tortured, denied medical attention, kept in solitary confinement, and even cut his own face to avoid being part of a parade for propaganda purposes.

He was the highest-ranking officer in the infamous ‘Hanoi Hilton’ prisoner of war camp and saw countless others die and give up. So what kept him going? Stockdale described his approach in an interview with Jim Collins, explaining, “I never lost faith in the end of the story. I never doubted not only that I would get out, but also that I would prevail in the end and turn the experience into the defining event of my life, which, in retrospect, I would not trade.”

“This is a very important lesson. You must never confuse faith that you will prevail in the end—which you can never afford to lose—with the discipline to confront the most brutal facts of your current reality, whatever they might be.”

THE PROBLEM WITH OPTIMISM.

When Collins asked Stockdale what sort of people didn’t make it out of the camp, Stockdale’s response was clear: “Oh, that’s easy. The optimists.”

This is consistent with Viktor Frankl’s experience in German concentration camps during World War II, where he described a sharp increase in deaths after Christmas. Frankl also related a similar idea to Stockdale, talking about the power of “tragic optimism, that is, an optimism in the face of tragedy.”

Stockdale didn’t credit the pessimists with much better success than the optimists, saying that they gave in soon afterwards. Instead he suggests finding that almost paradoxical balance between acceptance of the brutal reality of now, with unwavering faith in how you will make it in the end.

Stockdale’s approach is consistent with a range of ideas and philosophies. It can be compared to the quote of ‘whatever doesn’t kill you makes you stronger’; it speaks to Angela Duckworth’s focus on grit as a defining factor for success; resonates with aspects of Buddhist philosophy; and even relates to strategies to address drug addiction.

The Stockdale Paradox has strong links to the Hero’s Journey, and the idea that trials and challenges are inevitable before the eventual victory. It is a close partner to Covey’s Circle of Concern and Influence and the proactive approach of focusing on what you can actually change. It could be considered to be a form of Framing, and has some links to the Peak End Heuristic by having faith on a positive endpoint. Finally, Hyperbolic Discounting might help to explain why this approach is relatively rare, given that we tend to focus on short term rewards over long term outcomes.

The Stockdale Paradox challenges the idea that you should simply be positive and optimistic when facing challenges and ambiguity, noting that such attitudes can create unrealistic expectations that will ultimately disappoint.

This model is a reminder to avoid denial or false positivity, and encourages you to face your current reality. This involves acknowledging how bad or painful that reality is and investing in anything in your power to make a difference.

Rather than short-term optimism, nurture the confidence that you will get through this period of challenge, no matter how long it takes. This represents a form of long-term optimism or faith in the ultimate outcome.

Explore More
Stockdale Paradox is featured in these playbooks:

This model is often used as a counter to the rise of positive thinking and positive psychology, though ironically the Stockdale Paradox is still ultimately about optimism — only optimism that is a distant and undefined element. Perhaps the underlying element of this model is the requirement to base yourself in reality while maintaining hope, so one criticism might be that to maintain hope you need to have a more tangible optimism — where you ‘hope for the best, plan for the worst’, and are hopeful at every opportunity rather than just for a distant future.

The Stockdale Paradox is often cited in the context of navigating the rise and persistence of Covid. When people started becoming infected, many leaders and people alike focused on being positive, saying that it would be ‘solved soon.’ Even as vaccines rolled out, people again had built up expectations that life would rapidly return to normal. Application of the Stockdale Paradox would involve complete confidence that we will ultimately get through this period while remaining aware of new challenges from new strains to issues with the vaccine rollout etc..

Jim Collin’s coined the Stockdale Paradox in relation to supporting companies and entrepreneurs who will inevitably need to work through countless challenges and setbacks. He discusses their need to be brutally honest with such challenges, navigating each one to the best of their ability, even as they maintain faith that they will succeed in the long term.

This model is obviously based on James Stockdale’s unimaginable story of torture and survival, and was described and brought to public attention by Jim Collins in his book from Good to Great. Collins in turn had sought out Stockdale after reading In Love and War, the book jointly written by James Stockdale and his wife Sybil about their ordeal.

Stockdale’s philosophy is grounded in Stoicism, and he often talked about the impact the books of first-century Roman philosopher Epictetus had on him. Indeed, as Stockdale ejected from his plane his exact words to himself were: "Five years down there, at least. I'm leaving the world of technology and entering the world of Epictetus." Stockdale discusses his philosophy in this paper on Stoicism.