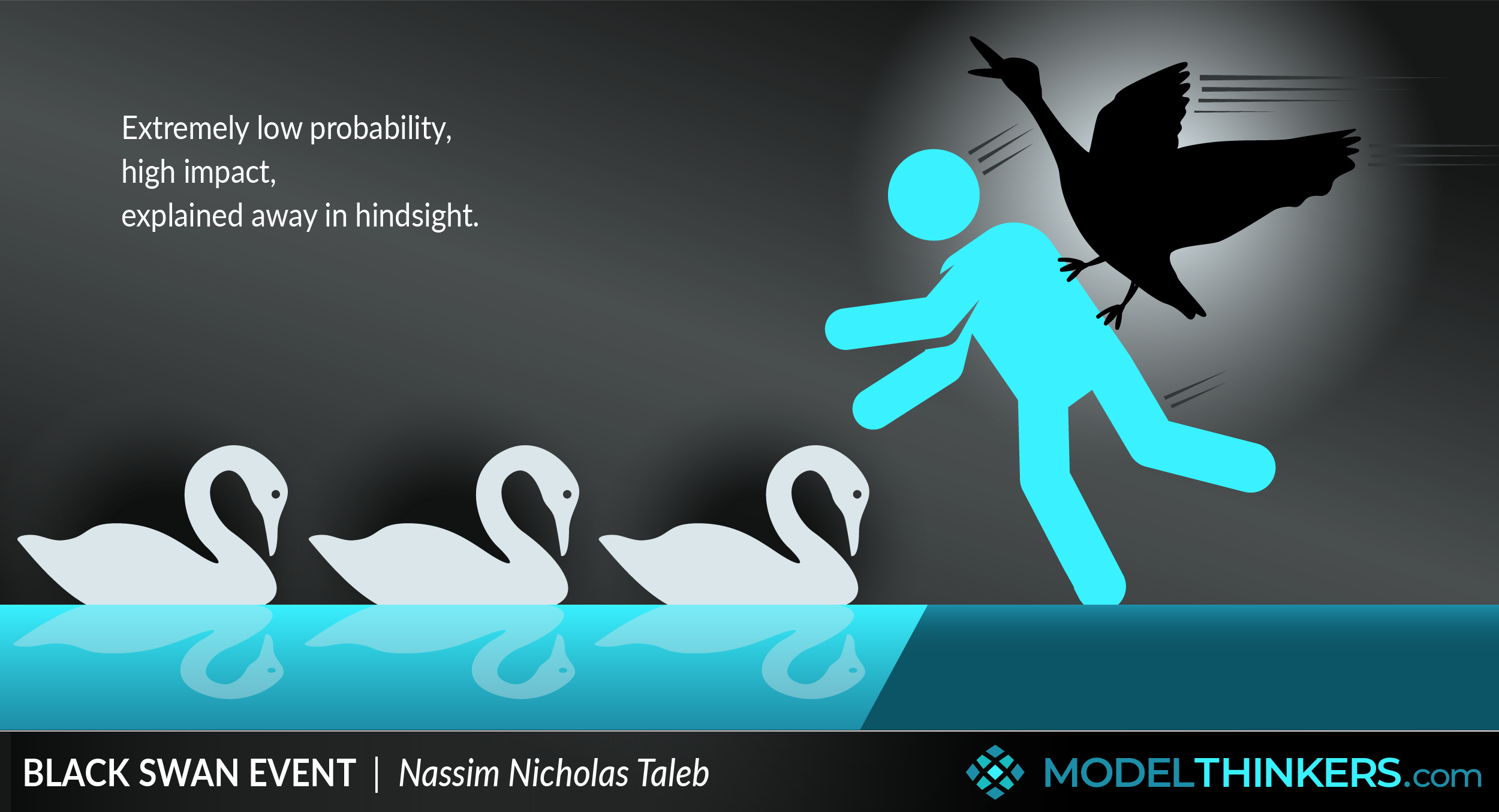 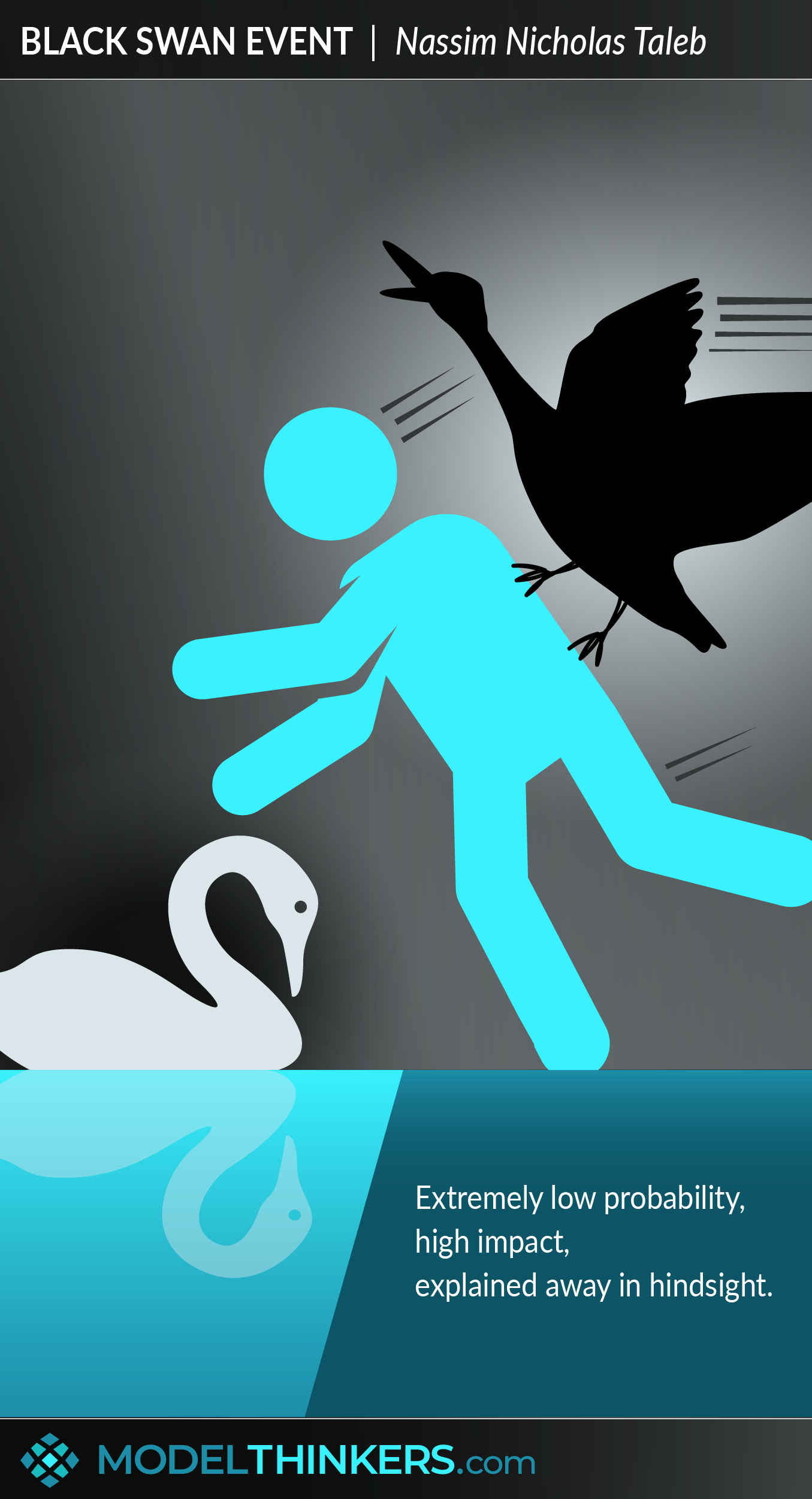 A Black Swan Event is an event with extremely low probability, high impact and is explained as being predictable in hindsight.

The mental model was first associated with financial events, but in his 2007 book, Nassim Nicholas Taleb has extended the metaphor for historical events, major scientific discoveries, and artistic accomplishments.

Most people understand that Black Swan Events are extreme outliers, with a low probability of occurring, and that they have massive even catastrophic impact. However, a less understood aspect of this mental model relates to the biases that are applied to explain it, normalise it and make it seem predictable after the event.

Planning for Black Swan Events involves considering a range of outlier, low probability possibilities. These take work to uncover and might involve seeking cross-disciplinary input posing broad ‘what if’ questions to establish possible events. This might include scenario-based planning to stress test against such extreme options.

Most risk planning focuses, understandably, on the high frequency or high probable events. Contingency planning for extreme and rare events might involve an extra layer of caution and investment.

The property of such systems was called by Nassim Nicholas Taleb “antifragility” – being able to thrive when exposed to randomness and volatility. Some people are naturally inclined to love risk and adventure, and some organisations are better equipped to withstand stress than others.

Explore More
Black Swan Event is featured in these Playbooks:

The rise of the internet

Taleb cites the rise of the internet as an example of a Black Swan Events. It’s a reminder that the mental model does not assume catastrophic impacts, as it is usually associated with, rather just massive impact.

The attack on the World Trade Centre

The hi-jacking of jetliners and suicide attacks on the World Trade Centre is considered a black swan event. It took over 3,000 lives and had a massive impact on the USA and more broadly in world politics.

Acknowledging real Black Swan Events may have limited utility because this doesn’t help us predict other similar events – the best you can do is to always be prepared for the worst. Entrepreneurs need to be aware of the black swan theory and use it to build robustness in case such events take place.

Moreover, it is easy to mistake any major event for a black swan. People think that events outside their expectations are black swans, but the phenomenon may take place less often than we think – false black swans are in fact caused by our inability to foresee the event.

Use the following examples of connected and complementary models to weave black swan events into your broader latticework of mental models. Alternatively, discover your own connections by exploring the category list above.

The Black Swan mental model comes from a past Western belief that all swans were white. In 1697, Dutch explorer Willem de Vlamingh discovered black swans in Australia, an event which changed zoology profoundly.

The black swan theory was introduced by Nassim Nicholas Taleb and refined in his 2007 book The Black Swan: The Impact of the Highly Improbable, which talks about events that surprise us and change the shape of our world, including occurrences in our own personal lives.

See this interview with Taleb on why the rise of Covid19 pandemic was not, according to him, a Black Swan Event. 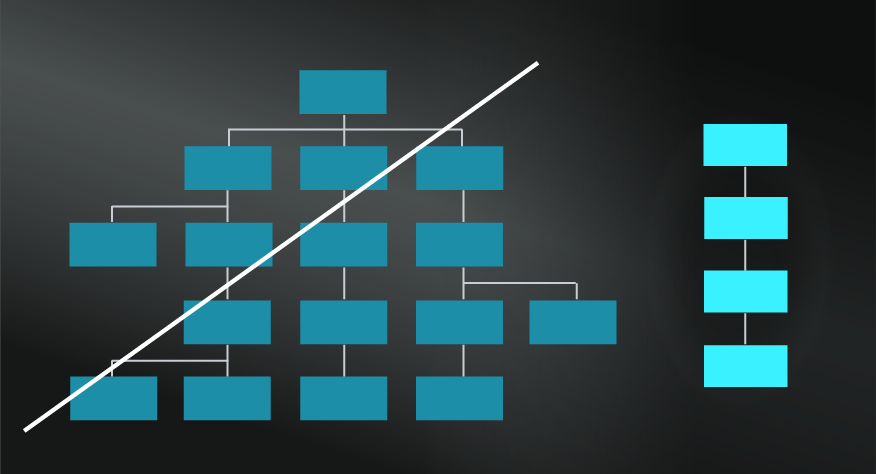