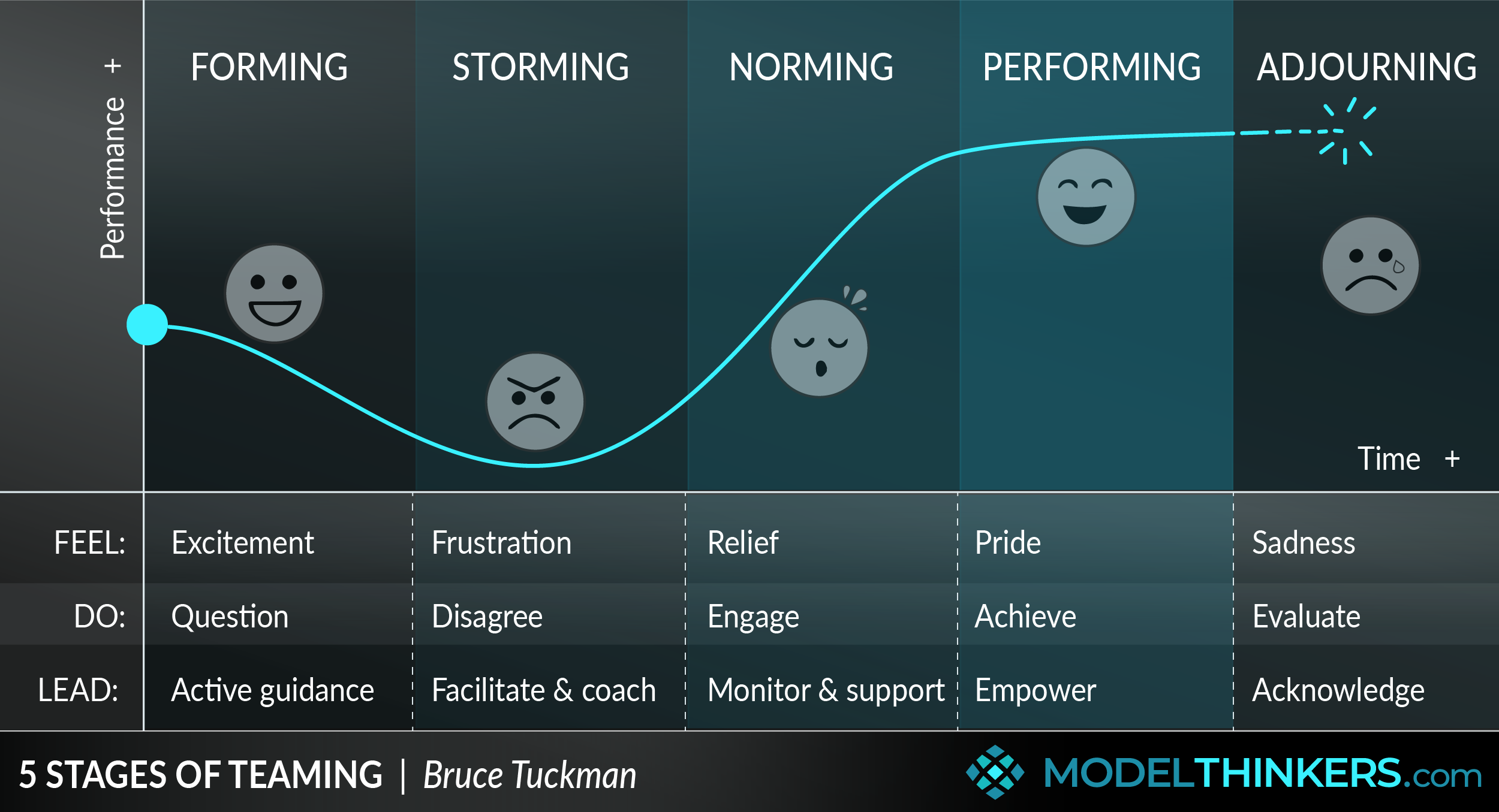 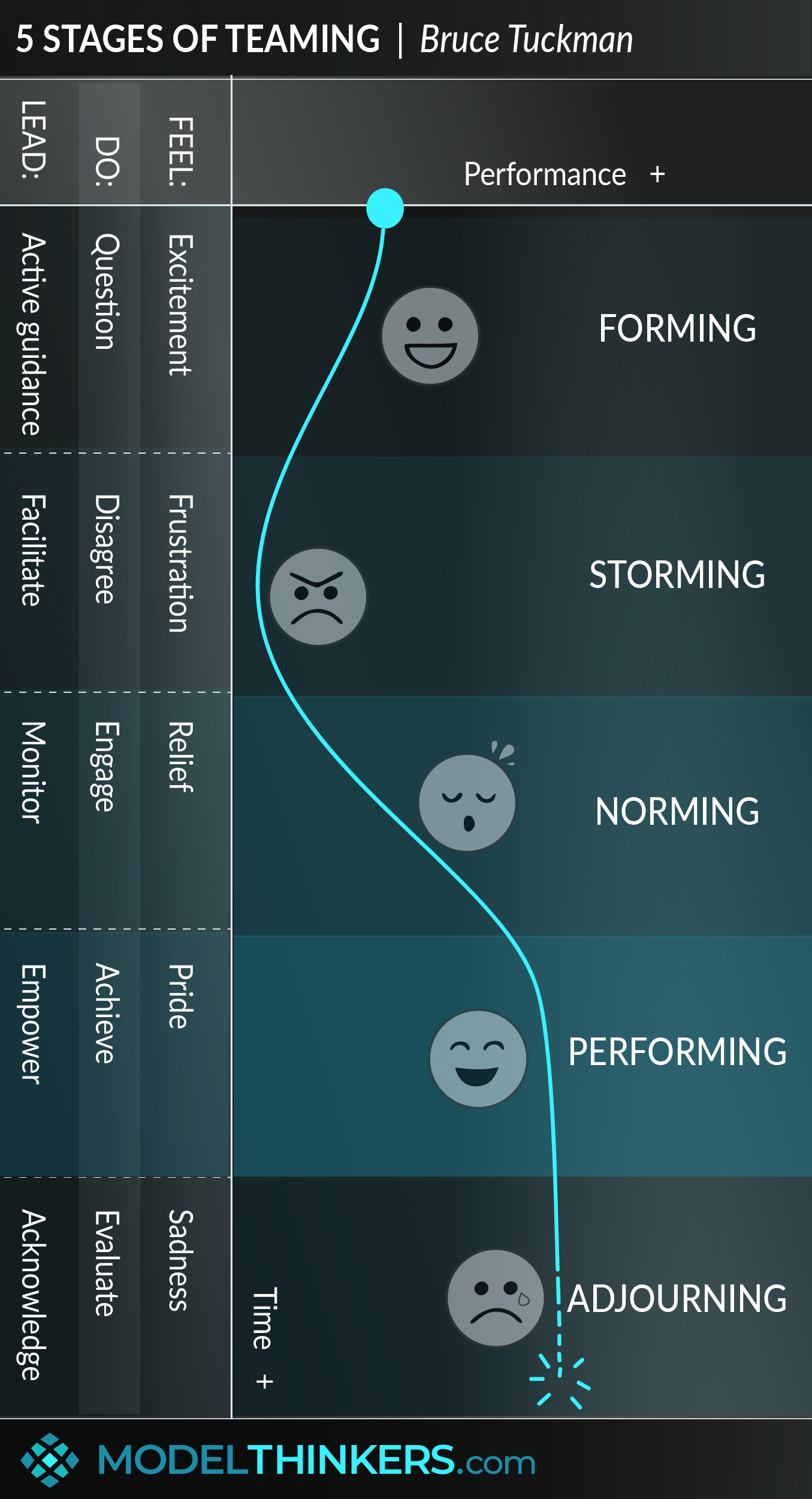 This model has persisted for over half a century and continues to inform the development of high performing teams — plus it rhymes, so what's not to like?

Tuckman’s 5 Stages of Teaming describes the process where groups tend to work through stages of forming, storming, norming, performing and adjourning.

Did you notice that I slipped in the ‘adjourning’ stage? You might not have come across that fifth step, as it was a more recent addition — see Origins & Resources below for more.

DIVING INTO THE FIVE STAGES.

Here are those stages in a little more detail:

While generally used as a linear process these stages can overlap, particularly between the storming and norming phases.

This model has strong links to Psychological Safety, particularly in the forming and storming stages, and has interesting references to the Hero’s Journey in the sense it defines a narrative of developing clarity, moving into action, overcoming challenges, and achieving goals.

Finally, this model is of particular relevance to organisations embracing Agile Methodology which involves the fast formation of, often multidisciplinary or T-shaped teams.

The forming stage can be supported with an emphasis by leaders and team members alike on forging meaningful connections with one another and providing clarity about how the team will work, as well as on project scope, processes and goals. A positive approach to diversity in the team can be supported by an emphasis of the T-shaped model and clarity might be supported by models such as The Golden Circle. Finally, teams should begin to develop a literacy around their Mental Models, to uncover assumptions and differences.

Rather than trying to avoid conflict, prepare for this stage as a way for individuals and the team as a whole to better understand their purpose and ways of operating. This stage can be best supported by actively building Psychological Safety. Doing so might involve applying additional models such as SCARF and Non-Violent Communication.

Appreciate that these stages can overlap and that there might be periods of storming and conflict even as the team apparently starts to ‘norm’ and improve performance. In that respect, assume that some teams will cycle through a few iterations or face new challenges that initiate a change.

Rather than letting the team ‘fizzle out’ as a project is complete, find ways to acknowledge and mark the end. This might include an event, possibly a celebration; formal acknowledgements; or a ceremony as part of an organisational process. It’s important that people are able to both acknowledge their achievement, express their sadness, and be supported to identify their next steps beyond the team.

Explore More
5 Stages of Teaming is featured in these playbooks:

Tuckman himself provided a criticism of his model, pointing out that it emphasised a “therapy-group setting” and did not consider broader types of teams. That said, many teams have found the model useful and applicable.

Perhaps a more substantial critique was best captured by this study from the US Military in an Acquisition Research Program. They looked at 321 “small, short-duration technical teams within the Acquisition Community.” They found a 95% confidence level that Tuckman’s stages only applied to about 2% of the teams, but discovered that a modified version which viewed storming as an ongoing process throughout the team duration, as opposed to a defined stage, did apply to over 70% of the teams.

In other words, the criticism consists of viewing these categories as linear stages — particularly the storming stage — rather than a part of a team, no matter what it’s developmental level. This might be more apparent in Agile based teams, though the evidence is still lacking to make a definitive call there.

Proponents for the model might counter saying that conflict in a ‘storming’ stage plays out totally differently to the conflict in a ‘performing’ stage, with the latter being managed more constructively and not interrupting performance outcomes.

This article outlines the experience of sporting teams going through Tuckman’s stages. It provides examples of the formation of State or Olympic teams doing things such as stopping participants from wearing their team colours, instead quickly creating a new team identity in the forming stage. The article also advocates using profile assessments to provide athletes with self-awareness during the storming phase.

This model was first proposed by Bruce Tuckman in 1965 as a necessary framework to describe team development. Tuckman teamed with Mary Jensen in 1977 to write a paper titled Stages of Small-Group Development Revisited, which added a fifth stage of ‘adjourning’, often referred to as ‘mourning.’