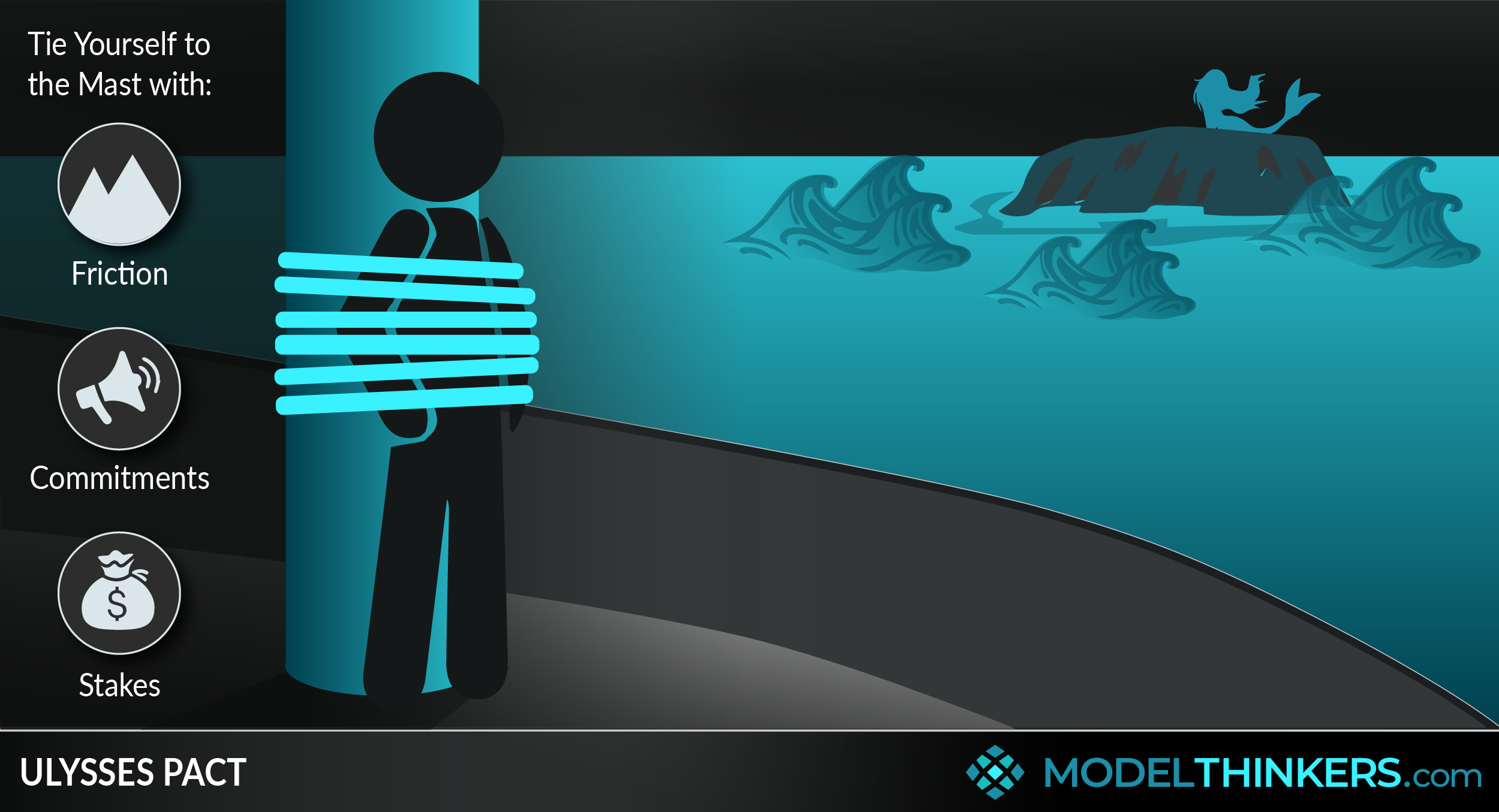 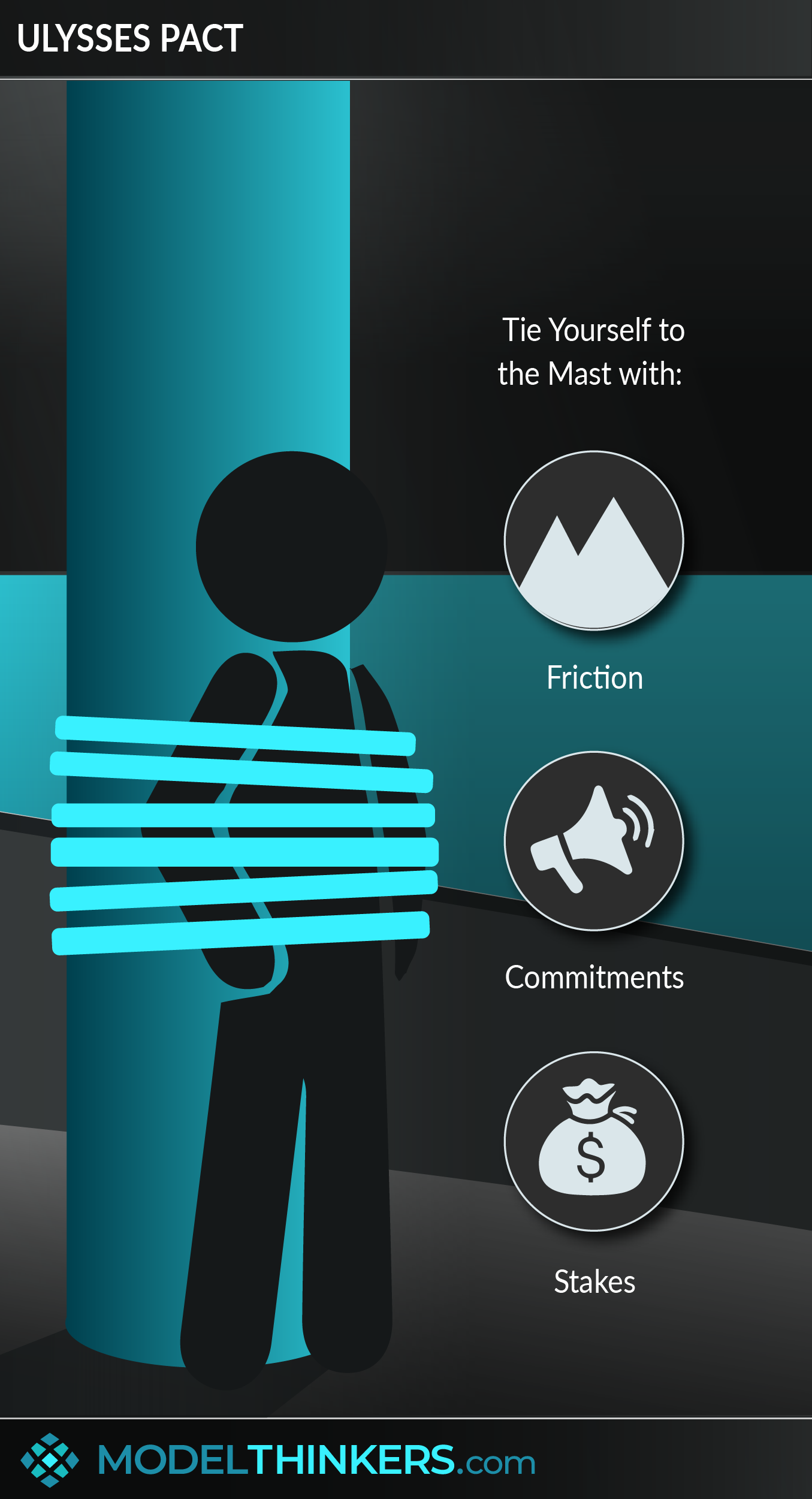 What are your goals? You might want to eat healthier, do more exercise, save money, get that project done, or a range of other admirable outcomes. The problem is that, in the future, you won’t have the same commitment, which is why you might want to start experimenting with this model.

A Ulysses Pact, or Commitment Device, is a voluntary decision to define and limit your future choices so that you can achieve your desired results.

THREE LEVERS BEHIND YOUR PACT.

The name 'Ulysses Pact' is inspired by the famous story of Ulysses tying himself to the mast of his ship to avoid the hypnotic power of the siren's song (see Origins below for more). Also known as Ulysses Contract or Commitment Device, it involves 'tying' your future self to the choices you want. Researchers generally agree on three main levers to achieve this:

Here are some options for how you can introduce Ulysses Pacts in your life: :

Ulysses Pacts are also an option for people with health issues. For example, in a mental health context, a person might use what’s commonly known as a Ulysses Contract to consent to treatment in advance, knowing that their cognitive abilities might be impaired at the time when they need that treatment. In the context of chronic alcoholism, people sometimes use Disulfiram, a medication that makes the ethanol in any alcoholic drink make them feel nauseous.

Ulysses Pacts have many connections across behavioural science-themed models in your latticework. Temptation Bundling could be described as a form of Ulysess Pact, particularly when you enforce a limited ‘pay off’ or reward linked to your desired behaviour. Parkinson's Law often references Forcing Functions to limit time investment which is also a sort of Ulysess Pact. The EAST Framework has already been noted as an effective way that you can experiment with altering friction. Finally, in terms of designing higher stakes, you might want to consider Loss Aversion and use more short term ‘stick’ over long term ‘carrot’.

Consider how to make the desired choice for future you easier, while increasing the friction of less desirable options. Use the  EAST Framework to brainstorm and test options as you make things Easy, Attractive, Social or Timely.

Go public with your goal and put your reputation on the line so you are motivated to deliver. Be warned that announcing your goal when not linked to identifying specific action can backfire, so be specific and accountable with your announcements.

Put your money on the line by making a bet, signing a contract or making another commitment. Consider using the Stickk website - see the In Practice section below for more.

Explore More
Ulysses Pact is featured in these playbooks:

One argument against the effectiveness of Ulysses Pacts is that it can create a form of learned helplessness by removing agency from the people involved. As such, the approach requires the ongoing creation or application of a contract or pact to be successful and changes to the situation might remove such drivers.

In relation to the public announcement motivator behind the Ulysses Pact, there have been mixed results from research on the impact of announcing goals in order to better reach them. It seems that announcing a commitment might feel rewarding and create payoff that substitutes for substantial change. For example, saying that you will get fit on social media might solicit positive replies, making you feel good and ‘righteous’ while removing your motivation to take action on it. Again, the research is mixed so we recommend publicly committing to the actual action you will take rather than a grandiose announcement. In the fitness example, it might be that you announce that you are jogging every morning and give someone permission to call you out on social media when you don’t go jogging.

Finally, there are some who argue that the use of Ulysses Contracts at a legal level for certain health conditions can be damaging.

The battle of Jingxing.

This battle was thought to have occurred in 205 BC between an army commanded by Han Xin versus the Zhao army commanded by Prince Zhao. Before dawn on the day of the battle, Xin sent 10,000 of his men through a pass into the plain facing onto the opposing army and instructed them to set up with their backs to the river providing no room for retreat. The strategy coined the phrase "fighting a battle with one's back facing a river."

Stickk was created after Dean Karlan, a professor at Yale University, set out to shed some weight. His weight loss approach used a form of Ulysses Pact and inspired StickK, a site where you can create higher stakes for your goals.

The Ulysses Pact is inspired by the famous Greek poem ‘The Odyssey’. It relates to the scene within the poem where Ulysses, or Odysseus as he is known in Greek, wanted to hear the song of the sirens. It’s interesting that this is one of the most well-known parts of the poem when it only consisted of 40 lines of the 12,000 line piece.

In the story, Ulysess was warned that any sailor who heard the sound would be hypnotized by its beauty and would turn their ship towards the sirens and crash onto the rocks there. To avoid this fate Ulysses ordered his crew to fit balls of wax into their ears so they could not hear the sirens. Ulysses remained curious, so he agreed to be bound to the mast of his ship so he could hear the sirens but would not put his ship and crew at risk.