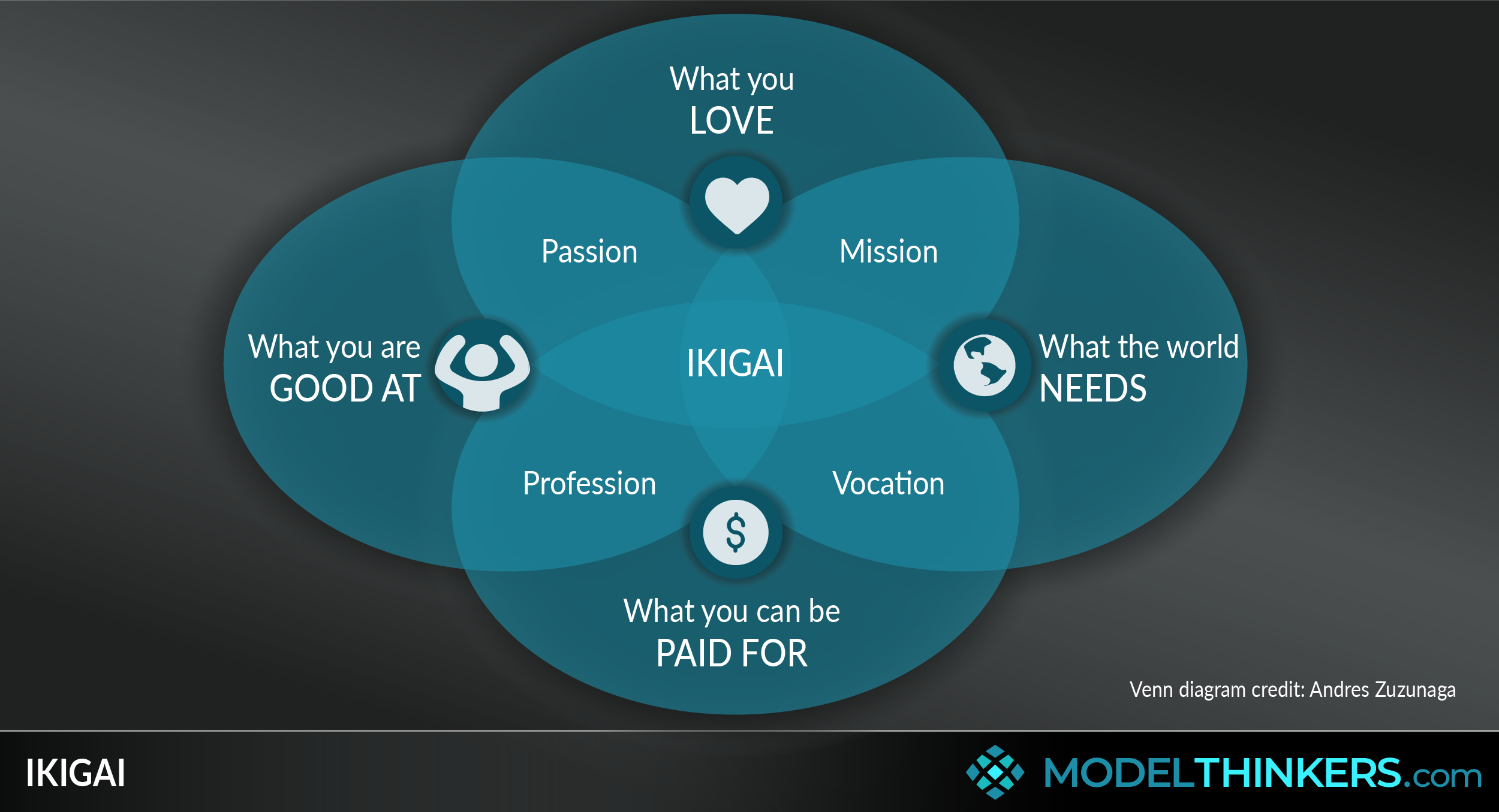 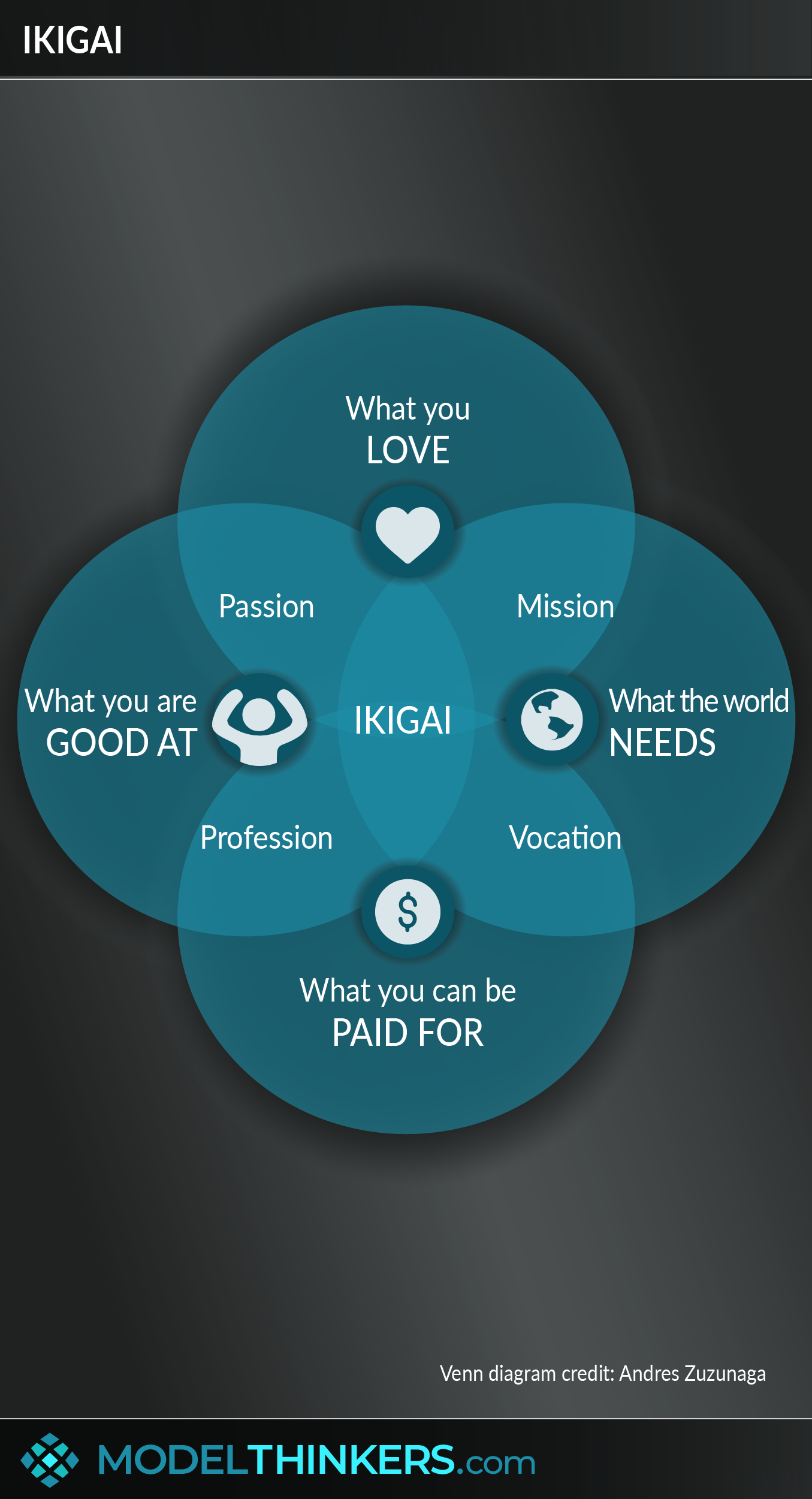 Why do you get out of bed in the morning and what fills your soul? No, we weren't trying to trigger an existentialist crisis — we just wanted to introduce Ikigai.

Ikigai is a Japanese inspired mental model that means ‘a reason for being’ of life value, and can be used to help find your motivation and purpose.

Noriyuki Nakanishi of Osaka University explained: "Ikigai gives individuals a sense of a life worth living. It is not necessarily related to economic status. Ikigai is personal; it reflects the inner self of an individual and expresses that faithfully. It establishes a unique mental world in which the individual can feel at ease."

The more common and popularised western version of the model arose sometime later (see below in origins & resources), and presents four guiding questions, the intersection of which will identify your reason for being:

Again, it could be argued that the latter two questions are not part of the original Japanese concept, but were popularised in the west with the incorporation of the venn diagram.

Whichever interpretation you work with, proponents argue that finding your Ikigai will bring you fulfilment, happiness and longer life - so pretty much everything, worth anything.

And, since you made it to the end of this model, you are likely also interested in Tal Ben-Shahar's Happiness Model.

Explore the convergence of ikigai’s four primary elements: what you love (your passion), what the world needs (your mission), what you are good at (your vocation), and what you can get paid for (your profession).

Many people are caught in cycles of being busy and reacting to events. Finding and maintaining Ikigai requires a level of ongoing reflection, considering the four questions as they relate to you in that moment. At the same time, it takes courage to consciously design an approach where your life and work sits in the intersection of those factors.

Rather than focusing on finding your ikigai as an end goal, use the model to find better balance in your life each day. For example, try rating your current situation or focus against the four elements and consider what might help you gain a more balanced result. Ask, what’s something that I can do today to start to address the imbalance.

Your ikigai will not necessarily be fixed, nor will it necessarily be a single defined answer at any point of time. For many, it will involve experimentation and will develop over time. To achieve this requires a high level of compassion, patience and even playful curiosity to ensure that you don’t get frustrated and give up.

Explore More
Ikigai is featured in these Playbooks:

In 2017 National Geographic reporter, Dan Buettner argued that Ikigai was a key factor to the longevity of people of Okinawa, who rarely retire and continue doing their work while relying on moai, their group of close friends. This was further advocated by Hector Garcia Puigcerver and Francesc Miralles in their book on Ikigai.

As an end goal, Ikigai sets high, perhaps even unrealistic expectations and can lead to more frustration and happiness as a result. Proponents argue that it’s best used as a loose guide, with considerable self-compassion, rather than a strict goal. In addition, claims about longer life related to this model are obviously difficult to verify.

We also hinted to another criticism in the overview section — the fact that there are two interpretations of the term. The original Japanese model versus the western interpretation as captured by the Venn-diagram. View this article, to explore this critique and the alternative Japanese interpretation.

Ikigai is a mental model that takes a holistic view on achieving purpose and happiness.

Use the following examples of connected and complementary models to weave ikigai into your broader latticework of mental models. Alternatively, discover your own connections by exploring the category list above.

Ikigai’s origins are believed to date back over 1,000 years ago. It is composed of two words: iki, which means life and gai, which refers to value.

The 1966 Japanese book by psychiatrist Mieko Kamiya called Ikigai-ni-tsuite (About Ikigai) described Ikigai’s meaning as a form of happiness, that allows you to look forward to the future, even in times of sadness. As stated previously, this original framing did not tend to relate to economic drivers or 'what the world needs'.

The shift in interpretation happened in this 2014 blog by Marc Winn, where he took the concept of Ikigai as described by Dan Buettner, and combined that with a Venn-diagram, originally created in Spanish and focused on 'finding your purpose', by Andres Zuzunaga.

More recently, this more westernised interpretation was popularised by authors Hector Garcia and Frances Miralles in their book Ikigai: The Japanese Secret to a Long and Happy Life.