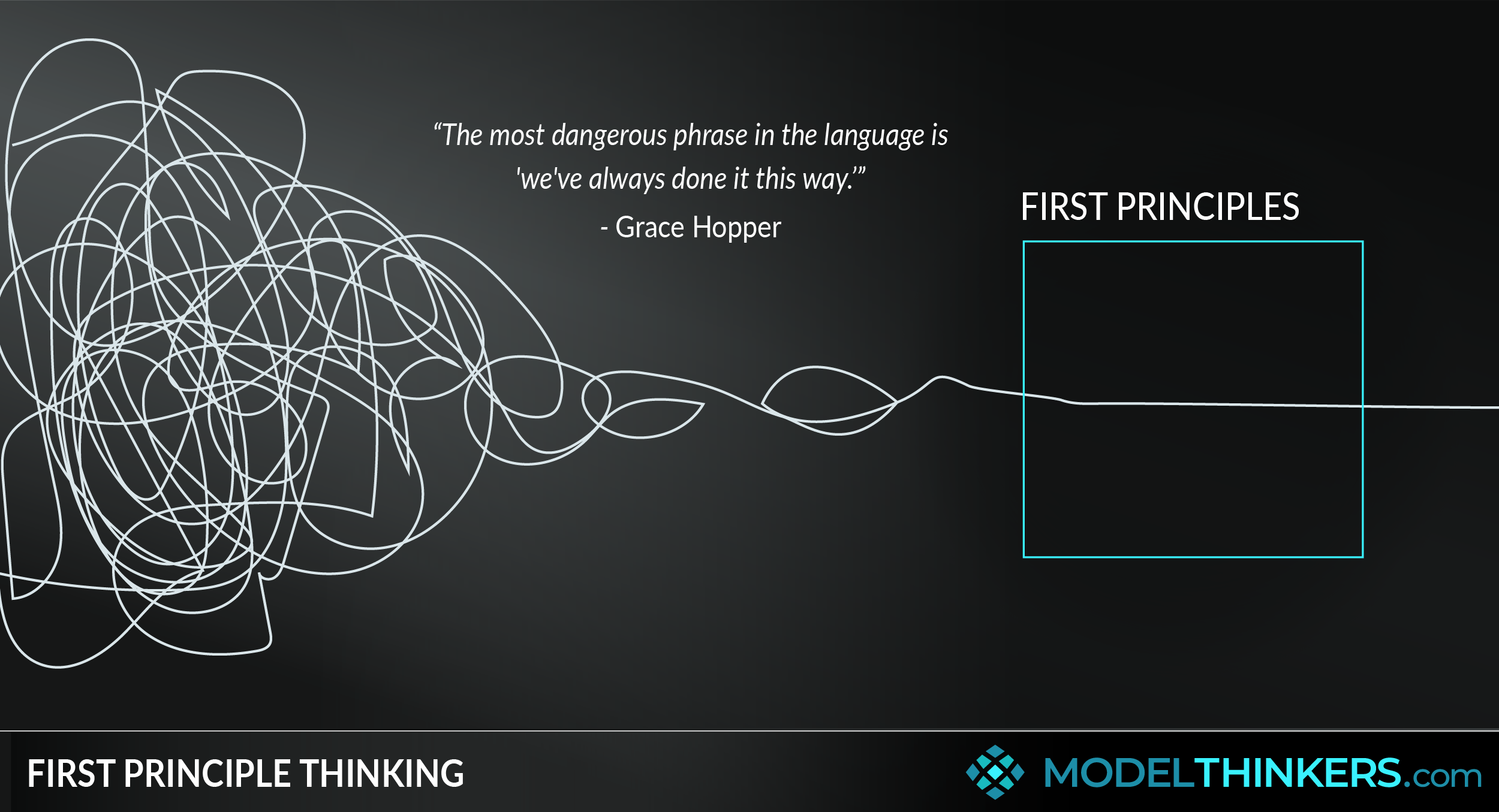 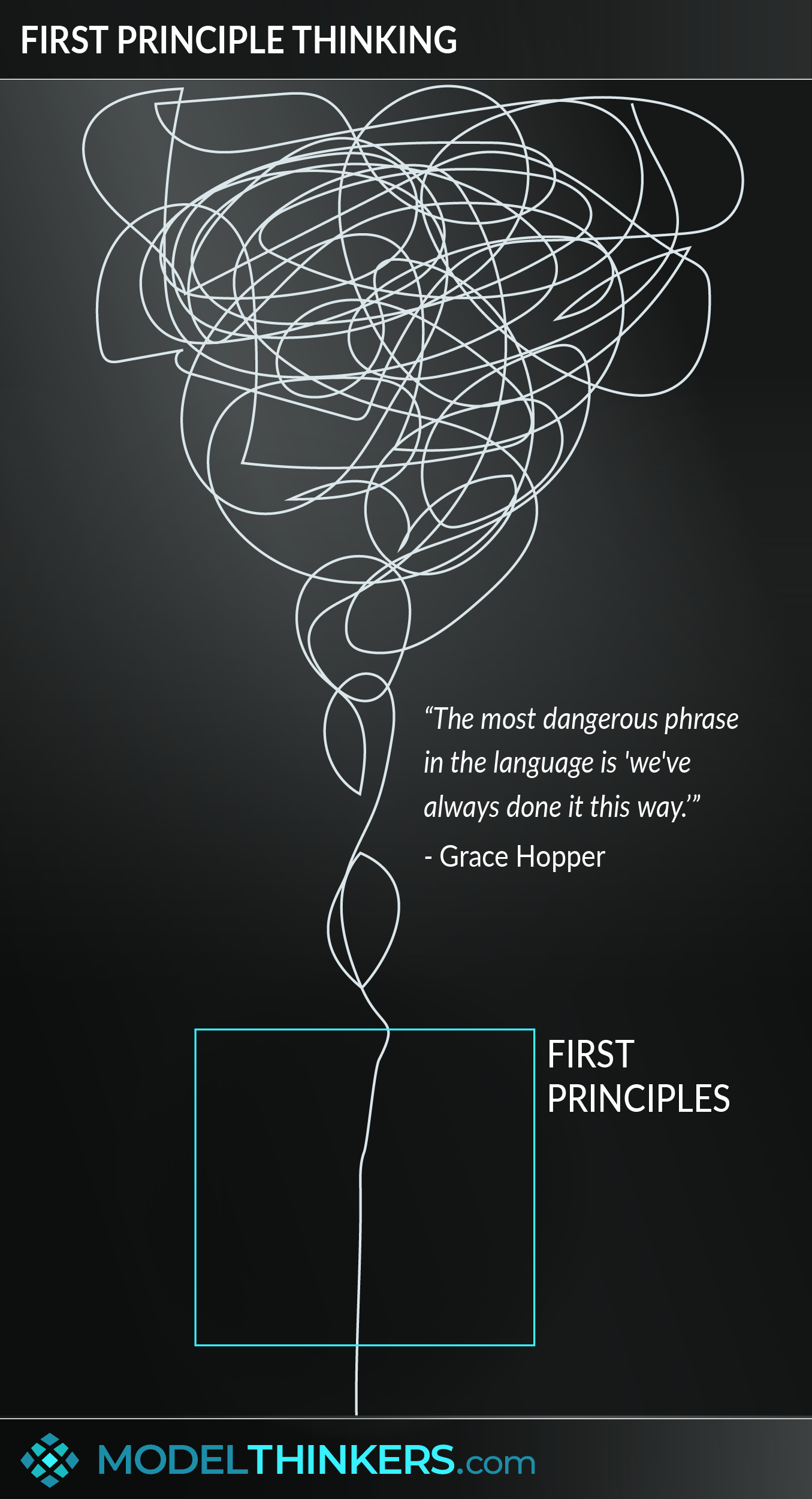 "We've always done it that way," has been described as the most dangerous sentence in the world. But you're here because you like to challenge the status quo, so start experimenting with this fundamental model for thinking and problem-solving.

First Principles Thinking is a means to challenge assumptions and solve complex problems by breaking them down into their most basic elements and reassembling them from the ground up.

It’s a method that has been used since ancient times by the philosopher Aristotle and promoted more recently by Elon Musk.

It encourages you to reduce a process to its fundamental parts or underlying assumptions that are the most basic and trustworthy, then building up from there. In science, a first principle is defined as an axiom that cannot be deduced from any other proposition or assumption within that system.

See Actionable Takeaways below for more.

First principle Thinking arose from mathematics and has impacted scientific fields more broadly. It has some similarities to Occam's Razor in terms of identifying the simplest solutions; and has inspirations from the Scientific Method in terms of identifying and testing assumptions. Be sure to explore the Feynman Technique as a practical way to apply First Principles as habit.

You might also apply it to the Minimum Viable Product as you cut away extraneous requirements and features to reach the core value. And to Double Loop Learning, as you challenge your own Mental Models through an iterative process of reflection.

Pay attention to ‘facts’ that others are telling you and that you are telling yourself. Consider which of these are base facts and which are built on assumptions. Try asking questions such as, ‘why do I think this?’ Or ‘How do I really know this is true?’

Use First Principles to cut through accepted dogma, beliefs or approaches to uncover the issues that underlie them. Try asking 'What if?' questions to explore unexpected and even unrealistic possibilities that might open up new options for you.

Inspired by the Feynman Technique, consider how you would explain the problem and/or domain to a child — thus drilling down to the most simple and basic elements.

Once you've ripped away the assumptions, consider what you are left with. What are the facts you actually know with the fewest assumptions possible? This becomes your starting point and your foundations.

When faced with a complex problem, break down each element into the basic, most simple information that lies at its heart. See Divide and Conquer and the MECE Principle for more.

When developing a new idea, work on ‘forgetting what you already know’ and ignore ‘accepted wisdom’ in considering it with fresh eyes in its simplest form. This can involve 'abstracting' the detail of a problem to focus on the core issues or reordering the elements to find fresh perspectives.

Invite people from cross-functional domains and/or with no history or background in the relevant area to offer their views. In addition, prioritise diversity and work with people with different experiences or points of view — you'll know who they are, they're the ones that annoy yo because you have to explain your actions to (ie. surface your assumptions). Let them question the accepted wisdom and explore fresh approaches born from their limited or different experiences.

Explore More
First Principle Thinking is featured in these playbooks:

Get it done and move on.

The limitation of First Principle Thinking is less about the model itself and more about the challenge of applying it. In a community-driven and connected world, where we all act on a deep need of belonging and 'fitting in', we are effectively bound by convention and analogy to previous experience. It's effortful, risky and often truly frightening to go against the grain of cultural norms, it can be a lonely, unsupported place — so it's no wonder it doesn't happen more often.

On the other extreme, using First Principles Thinking all the time will require an exhaustive process of questioning everything and missing opportunities to build on existing ideas and developments. In that sense, it's best used strategically in areas you wish to make a difference or innovate in.

Cogito, ergo sum is the original Latin philosophical phrase from Rene Descartes in his Discourse on Method in 1637. It translates into ‘I think therefore I am’ and was identified by Descartes as a fundamental statement that could not be doubted.

Musk explains: “Well, I do think there’s a good framework for thinking. It is physics. You know, the sort of first principles reasoning. Generally I think there are — what I mean by that is, boil things down to their fundamental truths and reason up from there, as opposed to reasoning by analogy.”

He argued that people who reason by analogy often make bad decisions because they’re building on existing knowledge and assumptions.

For example, in 2002 Elon Musk aimed to send the first rocket to Mars. Unfortunately, the cost of purchasing a rocket was over $65 million. Musk explained: “So I said, okay, let’s look at the first principles. What is a rocket made of? Aerospace-grade aluminium alloys, plus some titanium, copper, and carbon fibre. Then I asked, what is the value of those materials on the commodity market? It turned out that the materials cost of a rocket was around two per cent of the typical price.”

This led to Musk creating SpaceX and cutting the cost of launching a rocket down significantly when compared with the broader aerospace industry.

Use the following examples of connected and complementary models to weave first principle thinking into your broader latticework of mental models. Alternatively, discover your own connections by exploring the category list above.

The First Principles concept was outlined by philosopher Immanuel Kant in his work Critique of Pure Reason where he analysed the nature of the first (a priori) principles of natural science, and of metaphysics. However, the concept is an old one which traces back to Aristotle and beyond.

More recently Elon Musk has advocated for the principle.