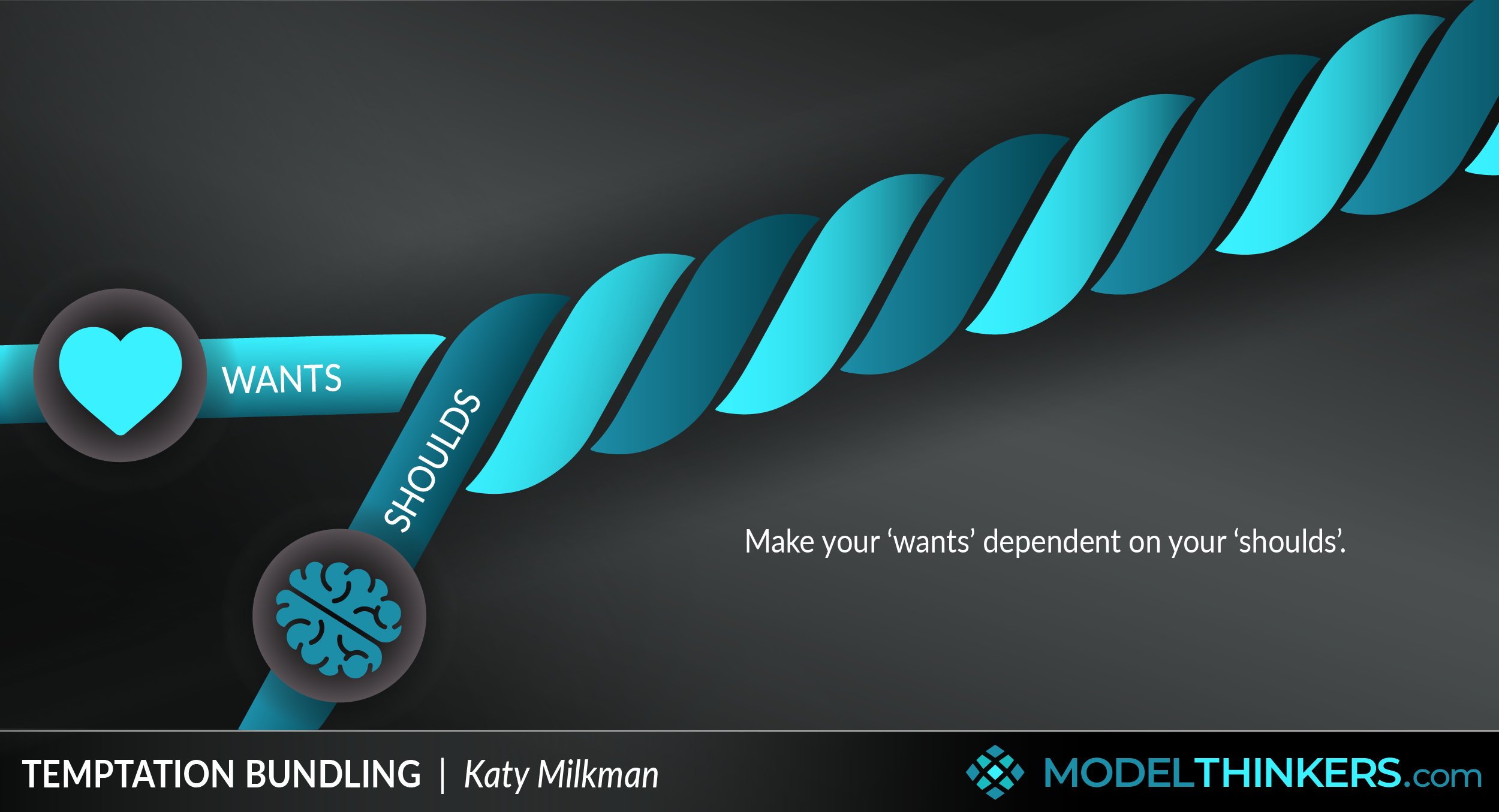 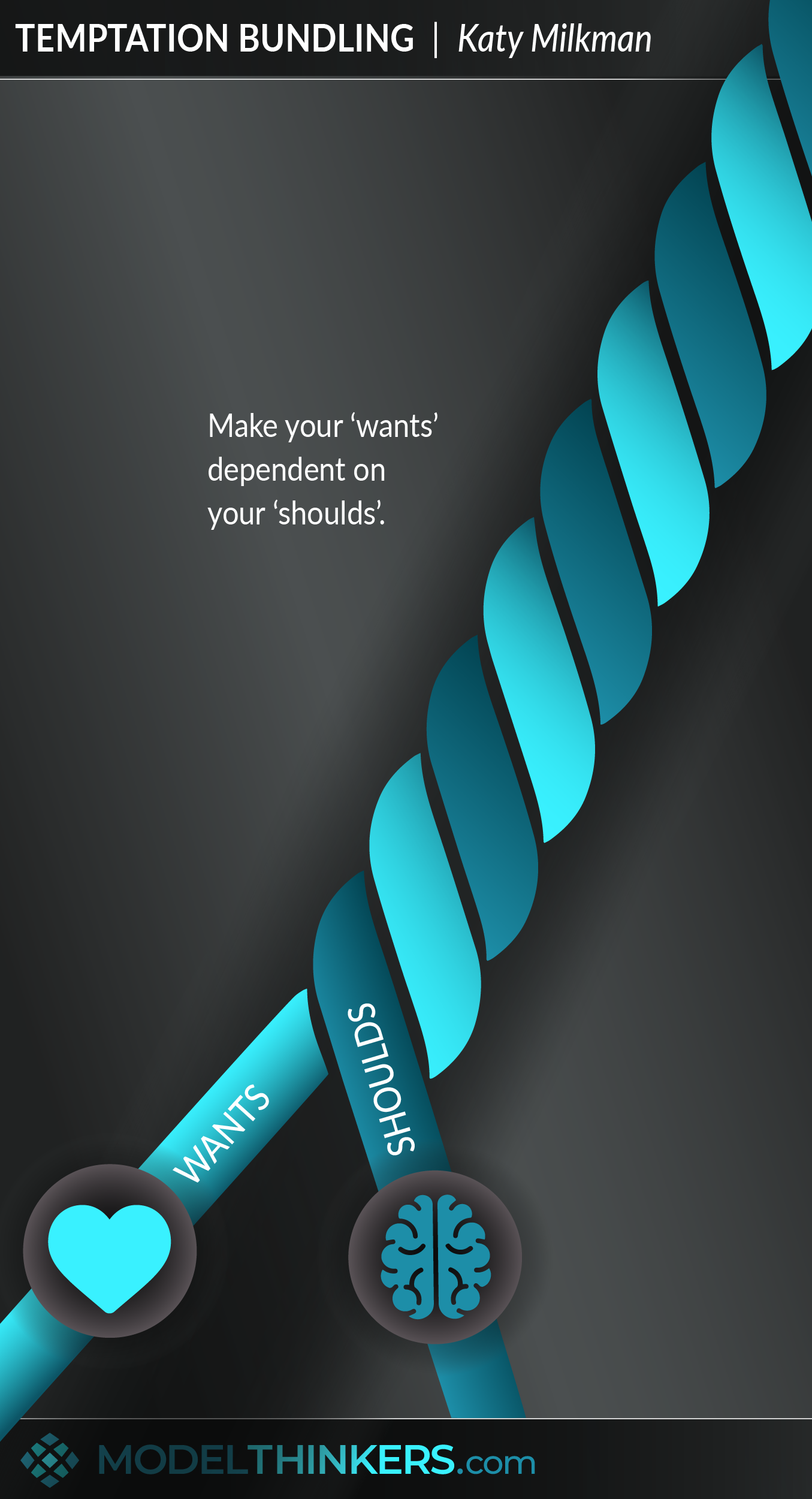 Who knew that Mary Poppins was onto something when she suggested that "a spoonful of sugar helps the medicine go down"?

Or put another way, if behavioural change and consistently acting in our best interest was easy we’d all be fit, educated super beings. But it’s not, and that’s where Temptation Bundling might help.

Temptation Bundling involves making tempting things or experiences that you want to do, dependent on desirable behaviours you should do.

Temptation Bundling is a strategy to address what its creator, Katy Milkman, calls the ‘want versus should conflict’. It's the tension between what you want to do because it delivers on a craving or temptation, versus what you know you should do because it’s in your best interest. Rather than counterposing them, Temptation Bundling involves linking these two elements.

See the In Practice section below for Milkman's original study linking gym trips to compelling audiobooks, as well as the creation of 'Cycflix' which literally linked an exercise bike to Netflix.

You can create your own Temptation Bundle by brainstorming your 'shoulds' and current 'wants', which might lead you to doing your tax statements while you binge on an addictive TV show, or making some phone calls that you've been putting off when you enjoy a chocolate treat. See the Actionable Takeaways below for more practical tips.

Temptation Bundling can be viewed as a variation of the Habit Loop, though its focus is on attaching positive behaviour to a craving rather than a cue.

Other models that you might want to combine with this approach include Compounding or the Domino Effect, to create momentum with your desired change, and the EAST Framework, to support change with Nudges.

You can consider the implicit 'reward' system and instant gratification aspect of Temptation Bundling in the context of Hyperbolic Discounting. And an interesting contrast to this model is the Happiness Model, which essentially tries to find the intersection between future and present 'payoffs'.

If this area is of interest, it's worth following Katy Milkman, the creator of this model, for more evidence-based change strategies. See more about her work in the Origins & Resources section below and view some of her other research in the Temporal Landmarks and Advice Giving Effect models.

Finally, members can download the Habit Canvas in the Toolkit below to use and combine this approach for behavioural impact.

This simple canvas distils Habit Strategies, the Domino Effect and temptation bundling into an actionable approach.

Make a list of your current temptations. Ideally, consider whether these are harmless or harmful temptations (this will come to play in the point below). Make a list of behaviours you want to do, your ‘shoulds’. Then consider how you might bundle them.

Consider how you might create a fixed system where you have no option of cheating e.g. don’t rely on willpower to not watch that show before you iron, perhaps give someone else the password to the streaming service so you have no choice. Consider applying the EAST Framework to assist in this.

Katy Milkman uses the example that if you love to eat a particular unhealthy food, such as cream-filled doughnuts, and you are trying to spend more time with your ‘cranky uncle’, you can tackle both at once with temptation bundling. Bundling the two — eating doughnuts and visiting your cranky uncle — will help you to reduce the former, and increase the latter. 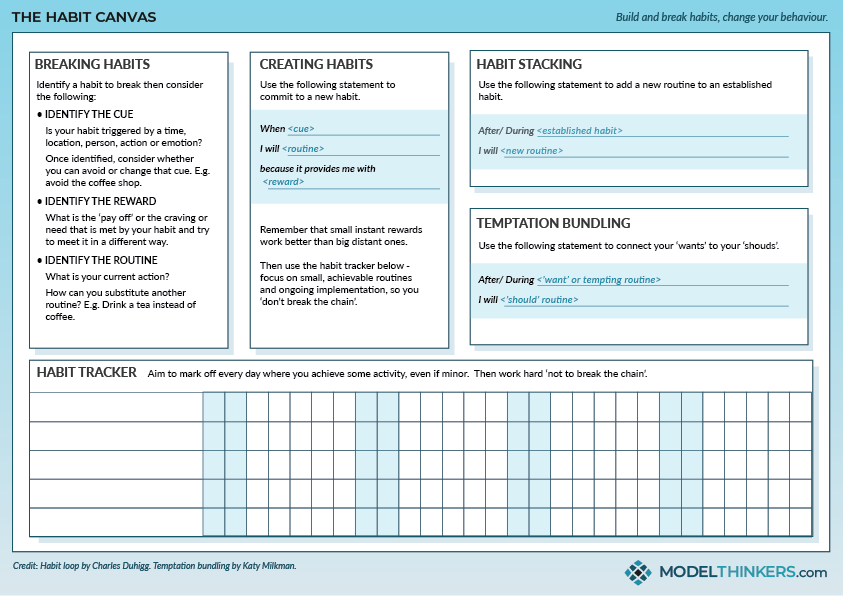 The Habit Canvas
A powerful canvas to break, create, stack & track habits plus use temptation bundling.
Explore More
Temptation Bundling is featured in these playbooks:

Milkman herself agrees that this area requires more investigation and research. She notes that the original study, involving gym goers listening to iPods (see the ‘in practice section’) had a strong initial impact but was reduced after participants had a Thanksgiving break (I wonder if this inspired her other work investigating Temporal Landmarks.) So the question remains of how to sustain gains with this strategy.

It also clearly works best when removed from choice and willpower — so for example, having your favourite audiobook only available physically at the gym, or the exercise bike hardwired to stop the TV when you’re not pedalling — but such systems that take your choice away for those decisions, are often difficult to set up.

The original study by Katy Milkman et al took 226 students and faculty who belonged to a gym and expressed interest in working out. They were divided into three groups

The results? Group A, who could only listen to their iPods in the gym, attended the gym 51% more than the control group and 29% than group B, who were encouraged to do it. This was sustained for 7 weeks but was reduced in impact after a holiday break at that time. 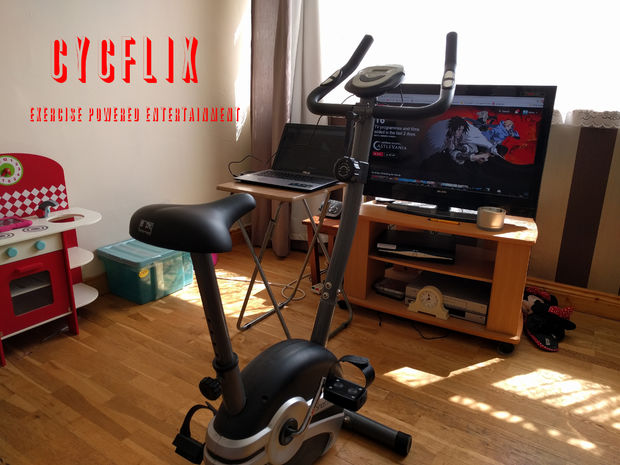 Dublin tech student Ronan Byrne created a social media stir when he inadvertently applied temptation bundling by wiring his computer to his exercise bike, and establishing an app that only let him watch Netflix when he was cycling.

Temptation bundling is a behavioral change technique that builds on habit formation.

Use the following examples of connected and complementary models to weave temptation bundling into your broader latticework of mental models. Alternatively, discover your own connections by exploring the category list above.

Temptation Bundling was coined by Professor Katherine Milkman professor at The Wharton School of the University of Pennsylvania. Find out more about Milkman at her website, or view a short video presentation about her original study here.

Milkman's website also has links to her highly recommended podcast — Choiceology, and has recently launched a bestselling book: 'How to Change'.