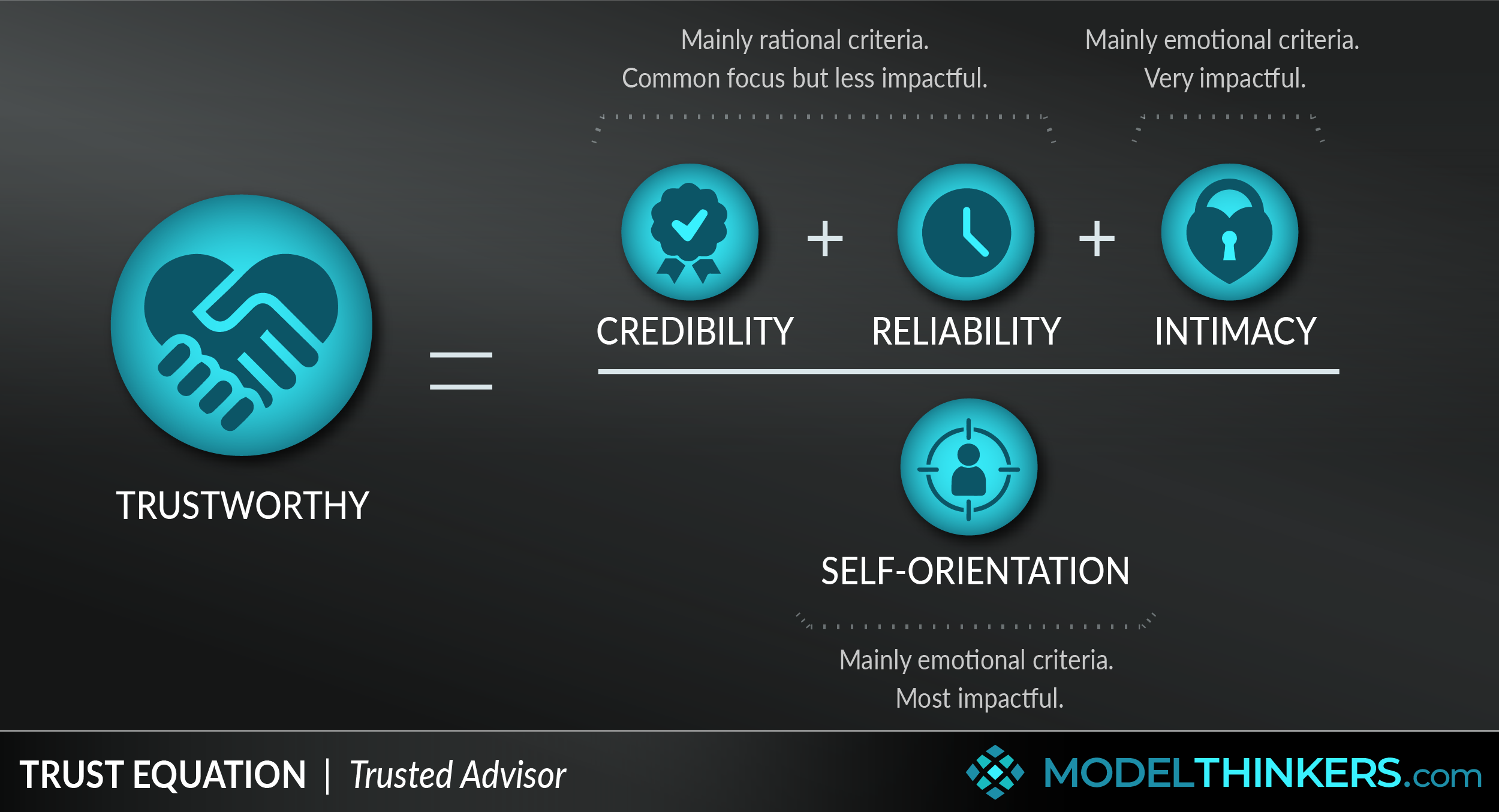 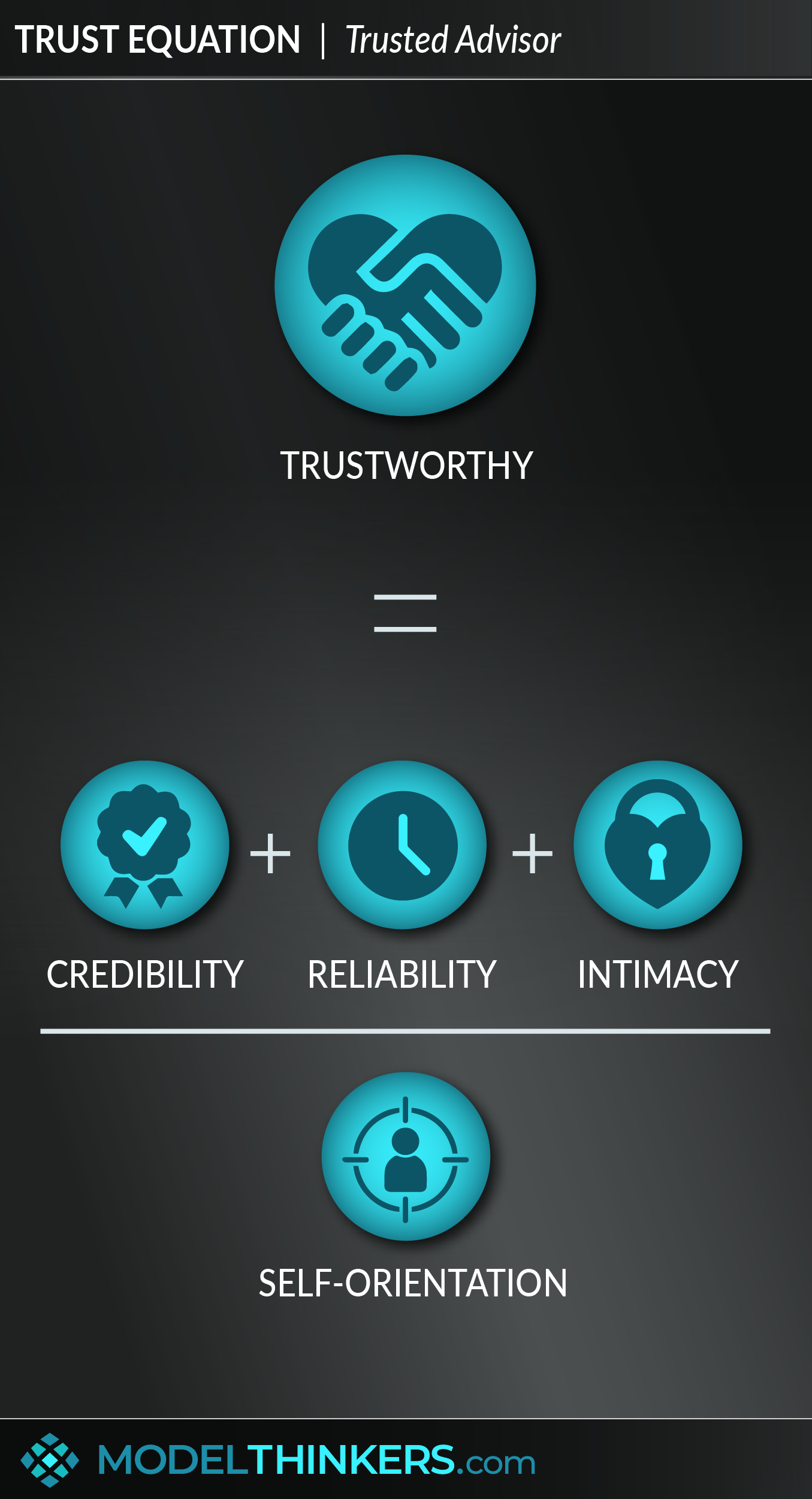 “Trust is the glue of life. It’s the most essential ingredient in effective communication. It’s the foundational principle that holds all relationships.” – Stephen Covey.

There’s no denying the centrality of trust in everything we do — from leadership, personal relationships, building businesses, or just collaborating on a project — trust will either bind people together or the lack of it will blow everything apart. Fortunately, there’s a model to help you understand and improve trust and trustworthiness.

The Trust Equation states that trustworthiness is equal to the sum of credibility, reliability and intimacy divided by a person’s self-orientation.

Let’s break down each of the elements in the equation, including tips to improve them.

THE 'HEART' WILL BEAT 'HEAD' FOR IMPACT.

According to Trust Advisor, the consultancy behind this model, most people tend to rely on credibility and reliability to build trusting relationships. It's no coincidence that these elements are viewed as primarily 'rational', are more tangible, and easier to measure. Reliability is particularly appealing because it is relatively easy to shift by making and fulfilling a series of small promises.

Unfortunately, the prioritisation of these two rational elements is generally misplaced, as they are the least impactful of the four elements.

Instead, Trust Advisor points to the two emotional elements of intimacy and especially self-orientation as the most impactful factors to shift when wanting to improve trustworthiness.

Trusted Advisor generally position the Trust Equation in a business context of sales, consulting or partnering, thus the consistent reference to ‘clients’. That said, it’s a versatile model that can be applied in a range of industries and applications.

Trust is a basic element of effective collaboration and the Trust Equation can be applied to Psychological Safety and models such as the 5 Stages of Teaming.

The intimacy element of the Trust Equation might be assisted by Empathy Maps and is crucial to effectively apply Radical Candor and Bezos’ High-Velocity Decisions, as well as understanding how to build cohesive communities using Dunbar’s Number. It also underlies persuasion models such as Cialdini’s Six Principles of Influence, negotiation models such as BATNA, and helps shift from a vendor to an advisor relationship in a way that is very reminiscent of Challenger Sales.

Finally, the lack of trust contributes to the Prisoner’s Dilemma and even to understand the forced bind of Mutually Assured Destruction.

It’s hard to build trust in short moments. It can be done, but greater trust is built over the consistency of time, where you consistently deliver on each of the elements in the Trust Equation.

The easiest element to shift is reliability. Simply make a series of smaller commitments and promises that you can deliver to develop a track record.

Intimacy and particularly minimising self-orientation is at the core of the most trustworthy results, so prioritise them for greater results. They are more emotional and less tangible, and can be challenging to shift, as doing so requires you to be more vulnerable, to share more, be more present and more empathetic.

It’s almost cliche to be ‘customer-focused' or ‘client-focused’ but people will sense when you’re going through the motions to make more money. Instead, practice opening yourself to empathy by being truly present, without distractions, and authentically responding to what people are saying and feeling.

Curiosity is a theme that runs through all of the elements in the Trust Equation. Asking informed questions can help build credibility; questions to understand your client’s needs helps to establish reliability and challenge self-orientation; and sincerely caring curiosity about people can help develop and demonstrate empathy.

The authors of this model suggest avoiding statements such as "this is the best solution." Instead, they recommend rephrasing that as something like, "my other clients do X for these reasons... Do you think those reasons apply here?"

Explore More
Trust Equation is featured in these Playbooks:

The most trusted profession.

The answer consistently comes in as nurses. More so than doctors, people need to feel a level of intimacy and vulnerability with nurses. The questions you ask about your body and bodily functions — there’s no hiding.

This seems to align with the Trust Equation’s analysis, particularly identifying intimacy as a key factor.

A major criticism of the data and ‘science’ behind the Trust Equation is that the researchers rely on self-assessments which are susceptible to biases and inaccuracies. Further, its name implies it has the workings of a mathematical equation which is highly problematic for such a complex combination of social elements.

So rather than talking about the science behind it etc, as Trust Advisor often does, it might be more useful to apply this as a conceptual model — that of course is impacted by The Map vs Territory model given the real complexity of trust.