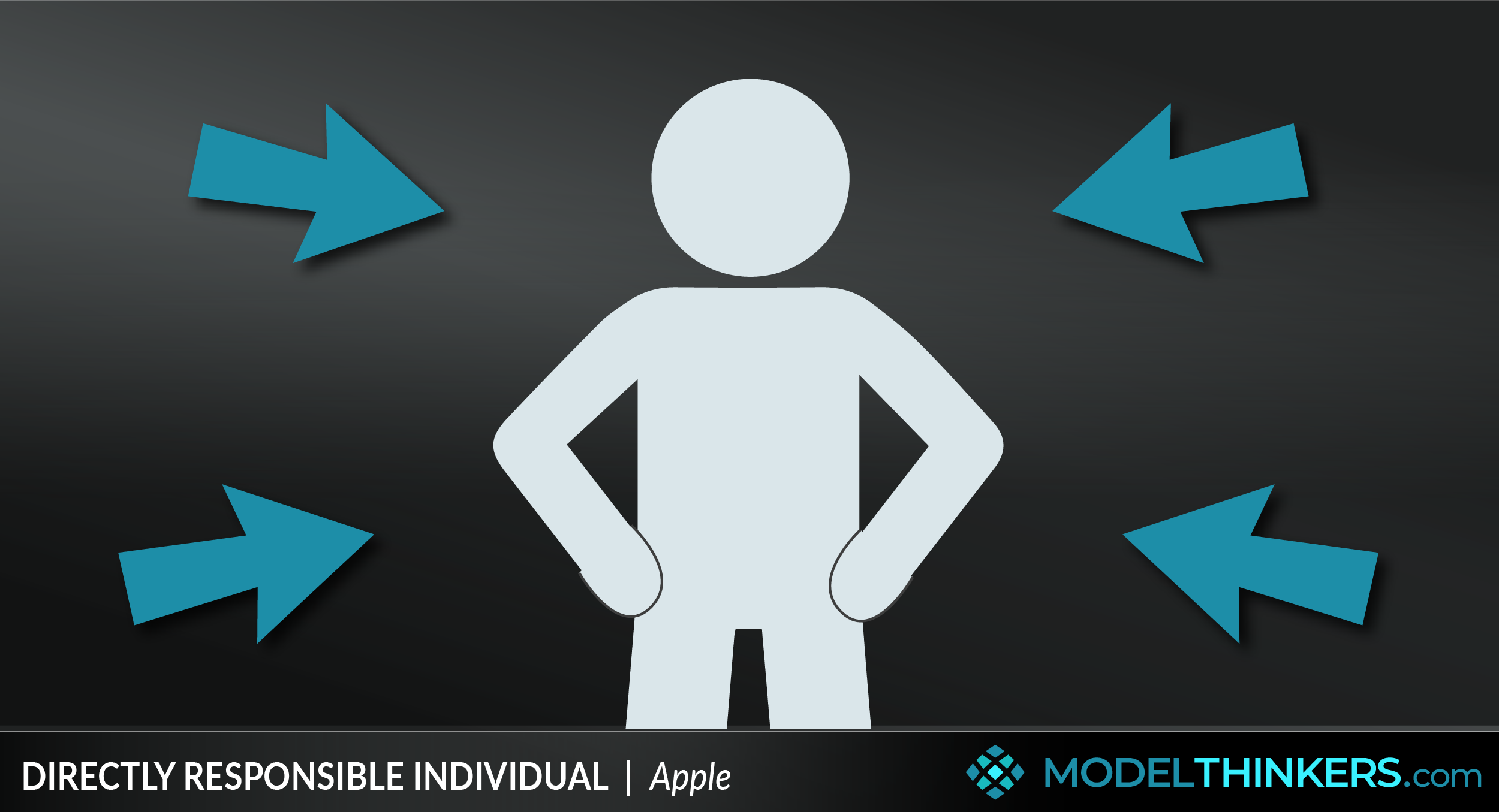 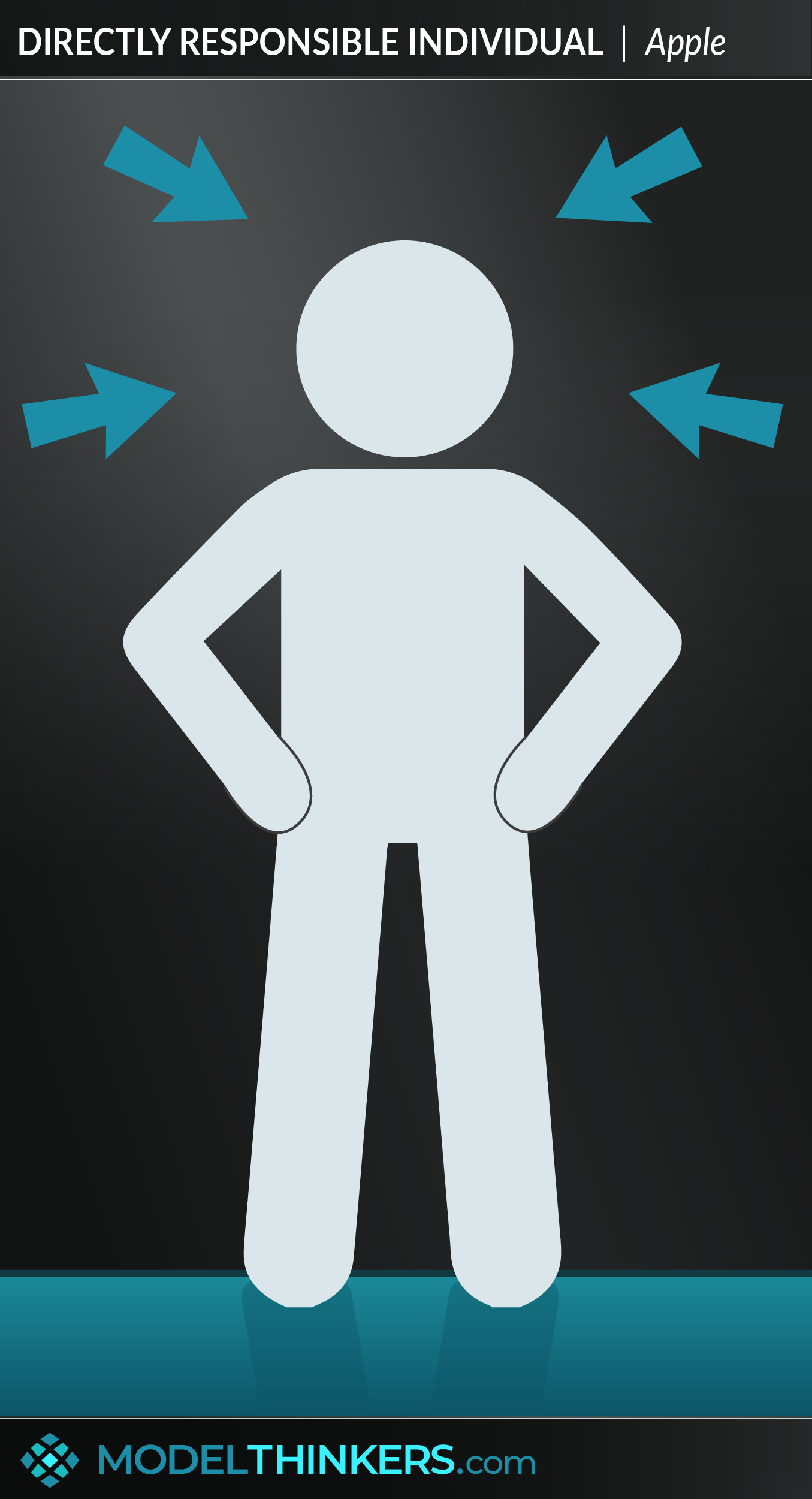 There’s no denying the central role of collaboration in our connected world. But there’s also no denying that you’ve likely found yourself saying ‘I thought you had that covered’ way more than you’d like. Which is where this model might help.

Directly Responsible Individual (DRI) is a practice championed by Apple where a single individual is identified as personally responsible for the results and decisions for a project and/or task.

Apple is well known for its culture of innovation, but the organisation also actively pursues a culture of accountability. The widespread use of DRIs at Apple allows teams and individuals alike to have a clear understanding of who’s responsible and accountable. The approach was led from the top, with Steve Jobs known for ensuring every action that came out of a meeting was assigned a DRI.

Similar approaches can be seen in other tech companies. For example, Amazon used what they called 'single-threaded leadership', which was the idea of single leaders and teams being able to have clear focus and responsibility and avoid intra-organisational dependencies.

There are a number of benefits to this approach:

As a teaming-based model, you might want to combine DRIs with 5 Stages of Teaming and even the 7Ps of Meetings. Consider how you might apply it in traditional teams, along with adding greater clarity to Agile Scrum, Kanban, and even DevOps.

In terms of selecting who should be a DRI, you might want to apply the Circle of Competence and, for cross-functional teams and projects that will require considerable collaboration, use the added view of  T-Shaped People.

At the beginning of a project, assign a DRI for the project as a whole and additional DRIs that sit under them for particular aspects of the project.

Every time an action or task is generated in a meeting or a Teams/Slack chat, allocate a DRI to it.

When organising a meeting or sending out an email, consider which DRIs need to be there and who else might be useful to invite as optional and/or cc in the email – thus reducing the number of people impacted by each meeting and email.

Explore More
Directly Responsible Individual is featured in these playbooks:

DRIs mean a single point of responsibility, but not necessarily a single point of thought or work. The risk with this model is that if someone is not the DRI for a task or project, they might not contribute as much, and instead focus on their own DRIs. In that sense, the risk here is inadvertently creating greater silos under the pretense of individuals taking responsibility.

Gloria Lin, a previous employee at Apple, advocated DRIs and implemented them at Flipboard. In a response originally posted on Quora, she explained the value to cross-functional teams:

“You want a DRI who is responsible for driving the team's sleuthing until the issue is solved. Often this is an engineering lead or an engineering program manager. Say it's mostly a mechanical engineering issue with a little bit of HW involved. Then usually a PD (product design) engineer will be the DRI, and they will work with the HW engineers to resolve the problem. If something keeps failing on the prototype testing lines, then you could have a TPM (test program manager) as DRI, working in conjunction with the Apple engineering teams, testing equipment vendor, and contract manufacturer teams.”

In 2008, Apple launched MobileMe, an email system aimed to provide a seamless experience and knock BlackBerry from its business user lead. What’s that? You haven’t heard of MobileMe? That’s because it was a complete failure.

The story goes that Steve Jobs promptly gathered the MobileMe team to a Town Hall where the relevant DRI was fired and replaced. It should be noted that advocates of DRI point out that firing those responsible is not the main purpose, practice or pay off for using it.

When Steve Jobs returned to Apple in 1997, one of the major changes he made was to get rid of traditional business divisions, with their separate Profit and Loss (P&L) responsibilities. Jobs fired the general managers of these abolished business units and instead moved to a functional organisation approach under a single business-wide P&L, and this structure remains today.

This runs against standard business wisdom that tells us that large corporations must be organised through multiple divisions, essentially run as independent business units, to promote accountability. Instead, Apple has focused on functional expertise and greater cross-functional teaming — which some argue is a key contributor to their culture of innovation.

It might be argued that DRI grew in Apple because of the gap in accountability that grew from the lack of divisional responsibility. Either way, it’s an approach that can be adopted in any organisational size and structure.