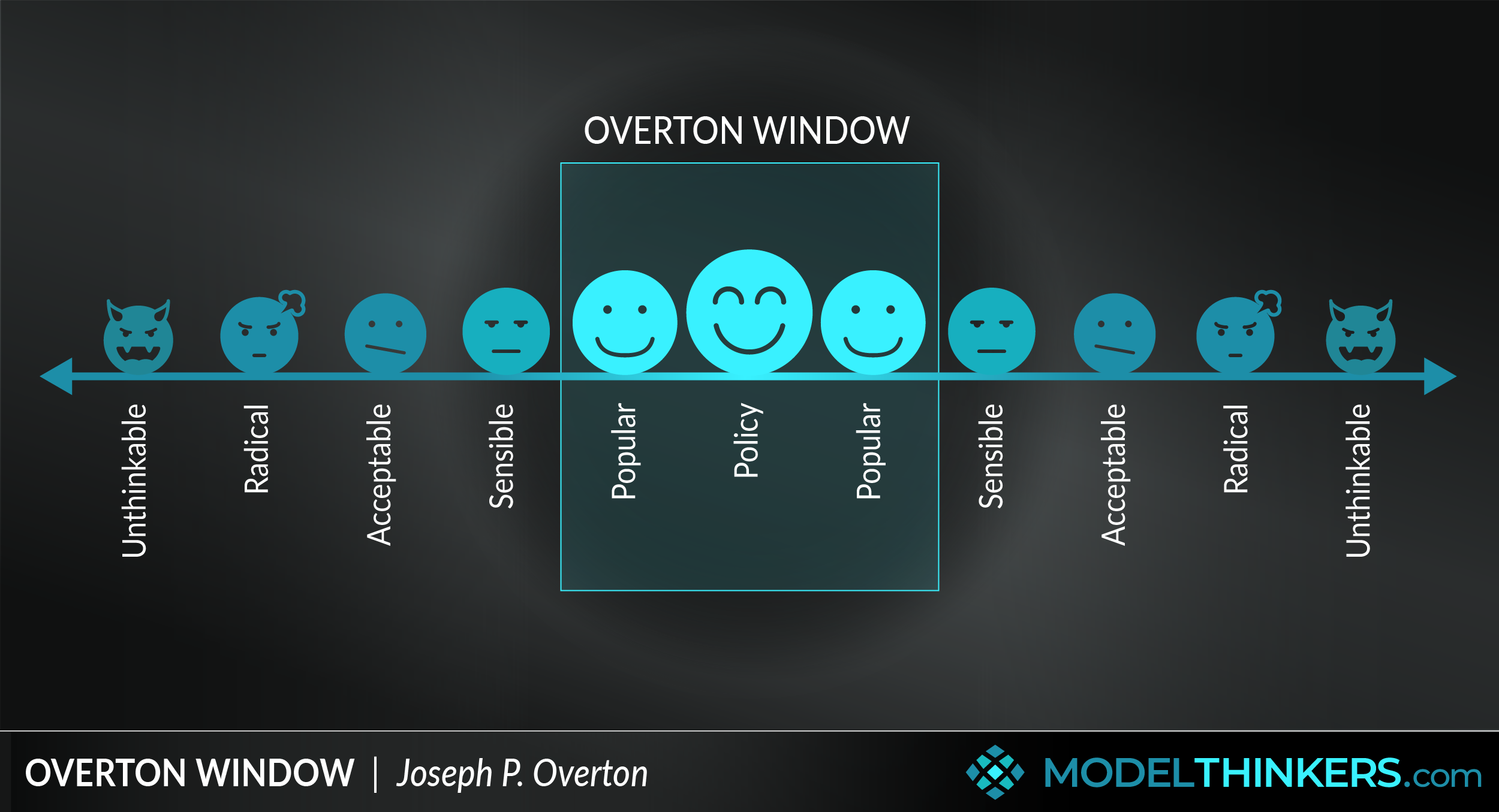 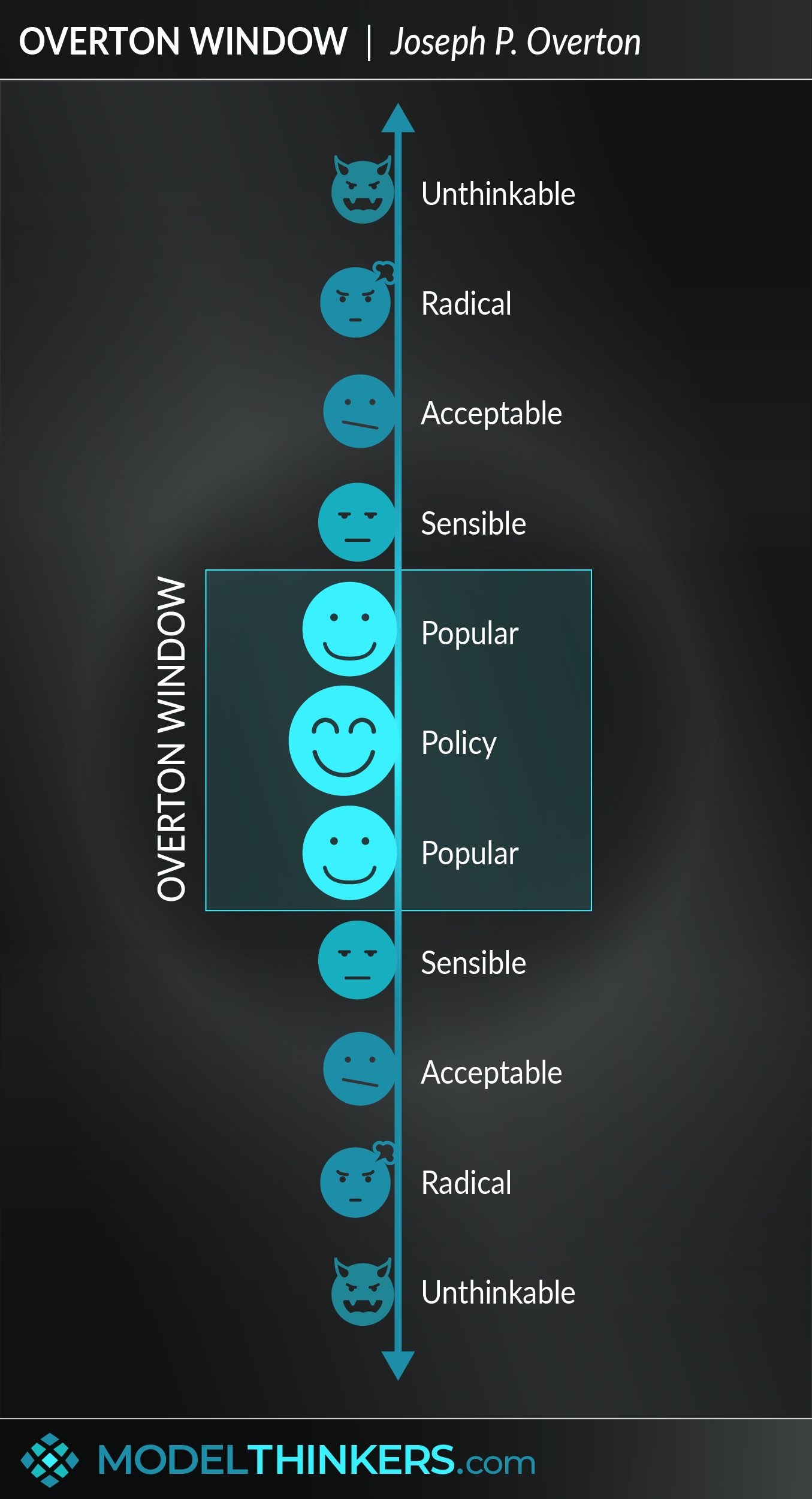 How do you engage with and shift political views in society? That's a huge question with many factors, and the Overton Window might be part of the picture. Or, to be more specific, it might help to frame the picture.

The Overton Window describes policies and political positions considered acceptable by the mainstream population at a given moment.

THE POLITICS OF CHANGE.

Policies within the Overton Window can be recommended without appearing extreme and shocking to the bulk of the public. Policies that are radical or unthinkable are not included in the Overton window.

The Overton Window will continue to shift along with societal beliefs and attitudes. It is particularly impacted by political and sociological factors, including economic cycles, advocacy, events, and political movements.

A common political debate lies in the strategic differences between moderates, who want to largely work within the Overton Window, and radicals, who take a position outside of it.

When viewed in the context of Framing and the Anchoring Heuristic, it might be argued that extreme positions might make incremental ones more acceptable. For example, it can be argued that Malcolm X's radical black nationalism made Martin Luther King Jr political positions, still radical for their time, more acceptable in contrast.

In a business context, the challenge is where to play in the context of the Overton window. Many will work hard to remain within the window and remain in step with public opinion. A smaller number of companies (yes, I'm looking at you Ben & Jerry's) will risk promoting 'radical' ideas, often creating a polarised market response, and might actually contribute to shifting the Overton window as a result.

Using data, polling and qualitative inputs can provide insights into the current position of the Overton window and its likely trajectory. It is a dynamic and moving target but can be tracked through audience engagement and surveys.

If an idea seems unacceptable today, understand that things will continue to change. A hundred years ago, women did not have the right to vote, a situation that is unimaginable nowadays. A longer view of history will allow you to bank on ideas that seem radical today.

The Overton Window has been criticised for lack of originality as it is quite similar to the old negotiation principle ‘you ask a lot, you get more than if you ask a little’. The model can potentially be used to manipulate - by putting false extremes outside the window, middle ideas are made to look moderate by comparison.

At the same time, determining the actual limits of the Overton window is impossible, as testified by many pundits' failure to predict political phenomena such as Brexit and the US election of Donald Trump.

The rise of the women’s movement.

While women still face structural disadvantages and are underrepresented in key leadership positions, the acceptance and expectation of gender equality has continued to move into the mainstream. This was also seen by the rise of the #MeToo movement which shone a spotlight on habitual sexual harassment in countless institutions.

The death of George Flloyd at the hands of a white police officer served as a catalyst to boost the Black Lives Matter movement in the USA and across the world. Polling indicated a rapid shift of attitudes towards systematic racism and police funding in the context of this movement that would not have been acceptable in the past.

The Overton window is a political mental model used to understand social norms and views.

Use the following examples of connected and complementary models to weave the Overton window into your broader latticework of mental models. Alternatively, discover your own connections by exploring the category list above.

The Overton Window was named after Joseph P. Overton who suggested that an idea is politically viable only when it falls within a certain range. The concept was given this name after Overton’s death in 2003 by his Mackinac Center for Public Policy colleague Joseph G. Lehman.