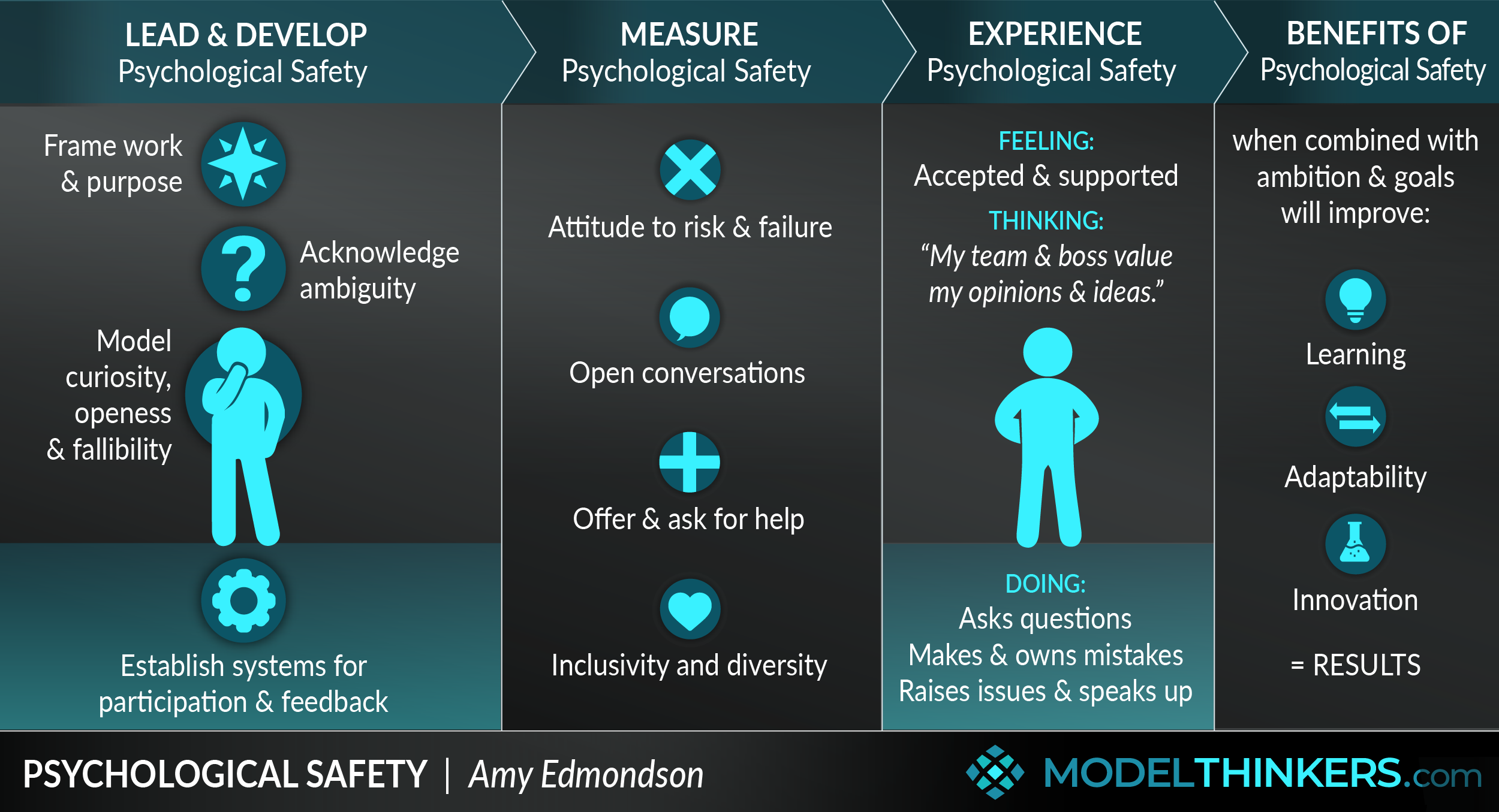 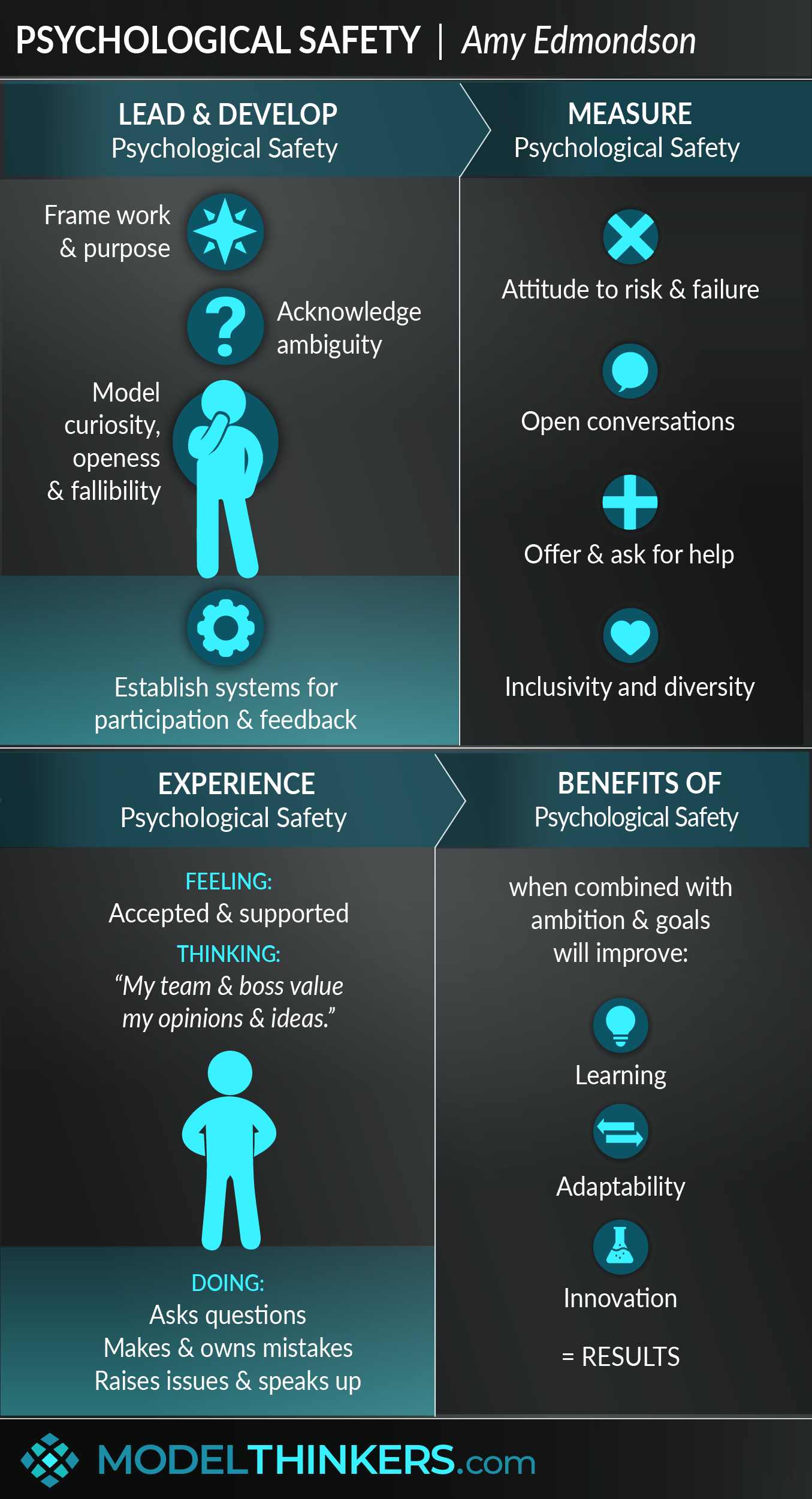 The results? Google discovered that team composition is less important than how a team interacts, structures its work and views contributions. Above all, they discovered that the single most important factor for high performing teams was Psychological Safety.

Psychological Safety refers to a team member’s perceived level of safety to take risks, be vulnerable,  make mistakes, and is reflected in their ability to express questions, ideas and concerns.

While the term has been referenced for decades, Amy Edmondson of Harvard Business School has been a leading researcher and champion of Psychological Safety.

Much of her and others research has linked Psychological Safety to improved innovation, continuous learning, and employee morale, engagement and retention. However, Edmondson makes the point that to achieve these and other benefits, Psychological Safety must be combined with a commitment to excellence and ambition to reach meaningful goals.

THE OPPOSITE OF PSYCHOLOGICAL SAFETY.

Psychological Safety is ultimately related to whether team members feel accepted and supported in their work. It gives people permission to experiment, be vulnerable, and speak with candour. Teams that do not display Psychological Safety tend to be rife with blame, recriminations and low morale.

Beyond just lacking innovation, individuals and teams in such a toxic environment will fail to provide their leadership with crucial feedback loops that would normally shed light on what's working and what's not. The result is a disconnection from reality that can have devastating implications — see the In Practice section below for the cautionary tales of NASA and Wells Fargo.

NOT ABOUT BEING 'NICE' AND ALWAYS AGREEING.

Psychologically Safe teams will disagree, argue and raise difficult conversations. However, this is built on a culture of respect and openness where team members demonstrate humility, seek to understand alternative views, and are able to change their minds without fear of repercussion or 'looking bad'.

Leaders, in all their forms and levels, play a crucial role in either developing or inhibiting Psychological Safety. In particular, Edmondson advocates leaders to actively:

Baked into all of the above is the importance of welcoming and modelling fallibility, including using terms such as "I don't know"; "I need help"; "I made a mistake"; and even "I'm sorry."

Edmondson has partnered to produce the Fearless Organisation website (see links in Origins section below), which provides a Psychological Safety assessment that explores four measurable dimensions:

The centrality of Psychological Safety can be understood in light of Loss Aversion and Hyperbolic Discounting. Specifically, the calculation of whether or not to speak up about something you are unsure about balances the risk of an immediate personal loss of reputation and standing, versus a potential distant benefit for others.

Psychological Safety is a fundamental model related to building high-performing teams, so relates strongly to 5 Stages of Teaming and T-Shaped People. The NASA example in the In Practice example below used the 5 Whys as part of root cause analysis to uncover a psychologically unsafe environment.

You might also consider how Psychological Safety is an underlying requirement in Radical Candor and building trust with the Trust Equation.

Teams that framework as an iterative process of learning help to support risk-taking, experimentation and learning from failure.

Teams that accept uncertainty and complexity help to empower team members to explore and learn. Ensure that people feel empowered and safe to say ‘I don’t know’ or ‘I need help’. At the same time, frame conflict and debates as useful mechanisms to understand the way forward.

When faced with a mistake or failure, approach it with curiosity to dig beyond an individual’s action and consider the bigger picture and systematic issues at play. More broadly, encourage curiosity with open-ended questions to better understand each situation and a potential way forward, including being open to having core assumptions challenged.

Psychological safety in the medical field has led to a greater valuing of simulations to allow staff to develop and experiment in realistic but non-critical situations. Consider how to provide equivalent opportunities for your team.

Acknowledge team and individual successes and be generous with credit when things are going well. Support and offer help to them when it’s not.

Explore More
Psychological Safety is featured in these playbooks: 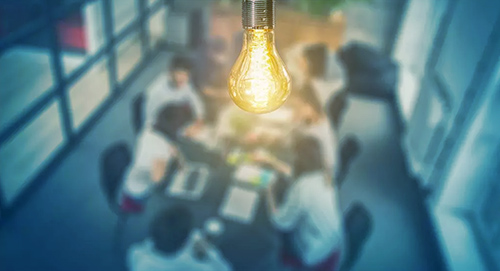 Psychological Safety is ultimately a broad and loose definition that can be hard to pin down, let alone measure. That said, there are multiple offers that do attempt to measure it, largely relying on team member perception - as per the approach offered by Amy Edmondson cited in the overview section above.

Rodney Rocha, a key engineer on the project was one person who had identified issues before the disaster. Attending a meeting where he might have reported this issue, explained the level of intimidation and hierarchy that prevented him from doing so.

This very short presentation by Harvard’s Amy Edmondson explores how root cause analysis and an approach such as 5 Whys, revealed that psychological safety was behind the disaster — with a toxic culture at NASA allowing the problem to go unaddressed until it was too late.

Edmondson has described the story of major US Bank Wells Fargo as a cautionary tale of Psychological Safety. In 2015, Well Fargo was a leading bank in the US with a strategy that focused on cross-selling. The leadership ran a campaign entitled 'Going for GR8', where staff aimed to sell at least 8 products to a customer.

This was an over-ambitious goal based on the realities of the market, but such unrealistic goals were not challenged by staff. Instead, it led to fake customers and unethical behaviour to give the appearance of success.

Pixar - a ‘safe-haven’ for creativity.

This article by Ed Catmull, the co-founder of Pixar, explores how the organisation focuses on culture and practice of creativity. Embedded into his description are elements of Psychological Safety, including empowering anyone to talk to anyone and that it must be safe for everyone to offer ideas.

Psychological safety is a foundation for high performing teams, collaboration and innovation.

Use the following examples of connected and complementary models to weave psychological safety into your broader latticework of mental models. Alternatively, discover your own connections by exploring the category list above.

While the term Psychological Safety predated Edmondson and was popularised by Google's Project Aristotle (referencing Edmondson's work), we attributed it to Edmondson in our diagram at the top of this page because she has become such a clear contributor and champion of the approach.

That said, Edmondson herself references the history of the term. In a joint 2014 paper with Zhike Lie, she explained: “In 1965, MIT professors Edgar Schein and Warren Bennis argued that psychological safety was essential for making people feel secure and capable of changing their behaviour in response to shifting organisational challenges.”

Since then Edmondson has delivered TED talks on the subject, as well as written several books on the topic — the most recent of which is the highly recommended Fearless Organisation.

Edmondson is also behind the Fearless Organisation website and its connected consulting and diagnostic services.