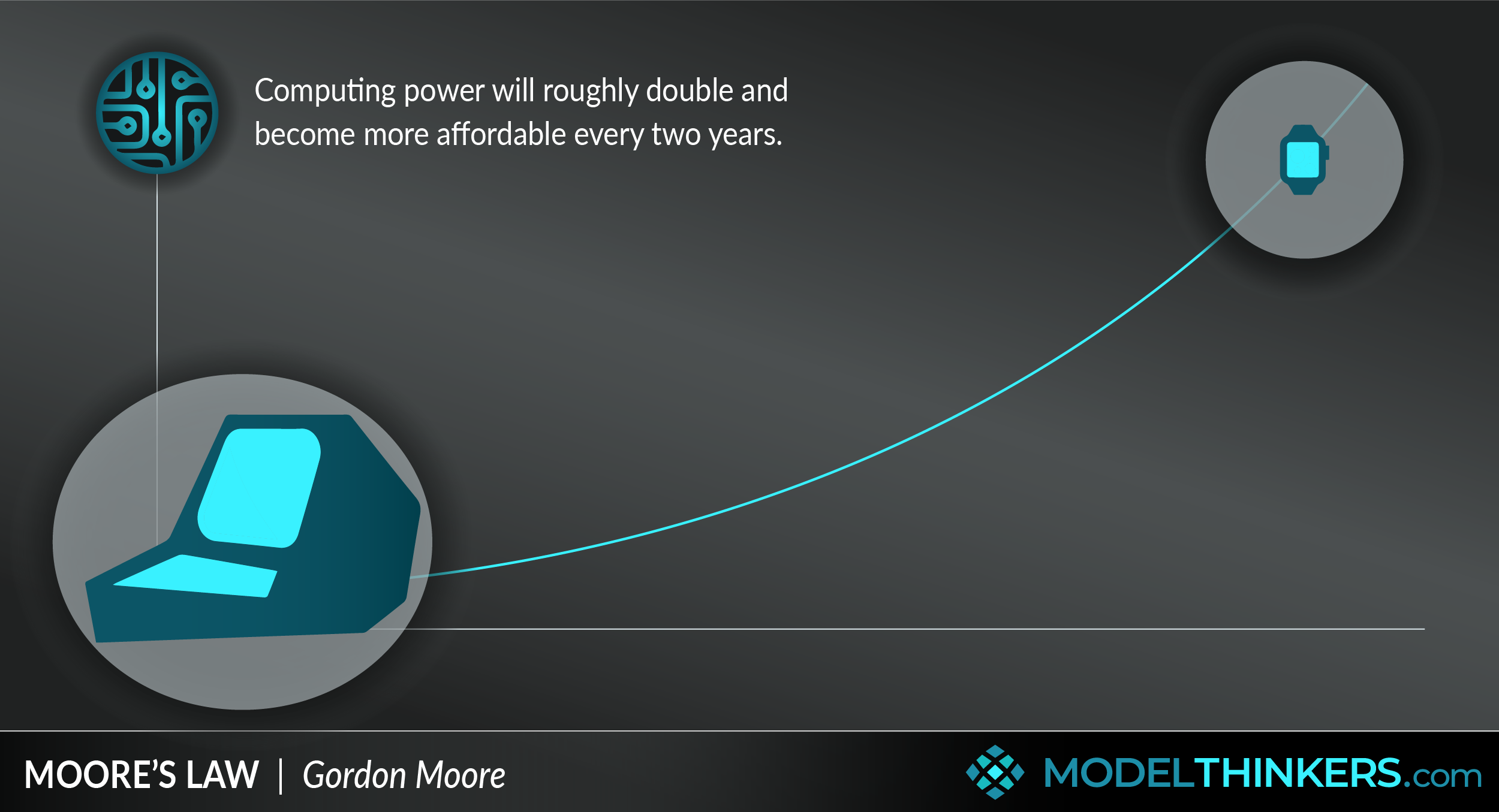 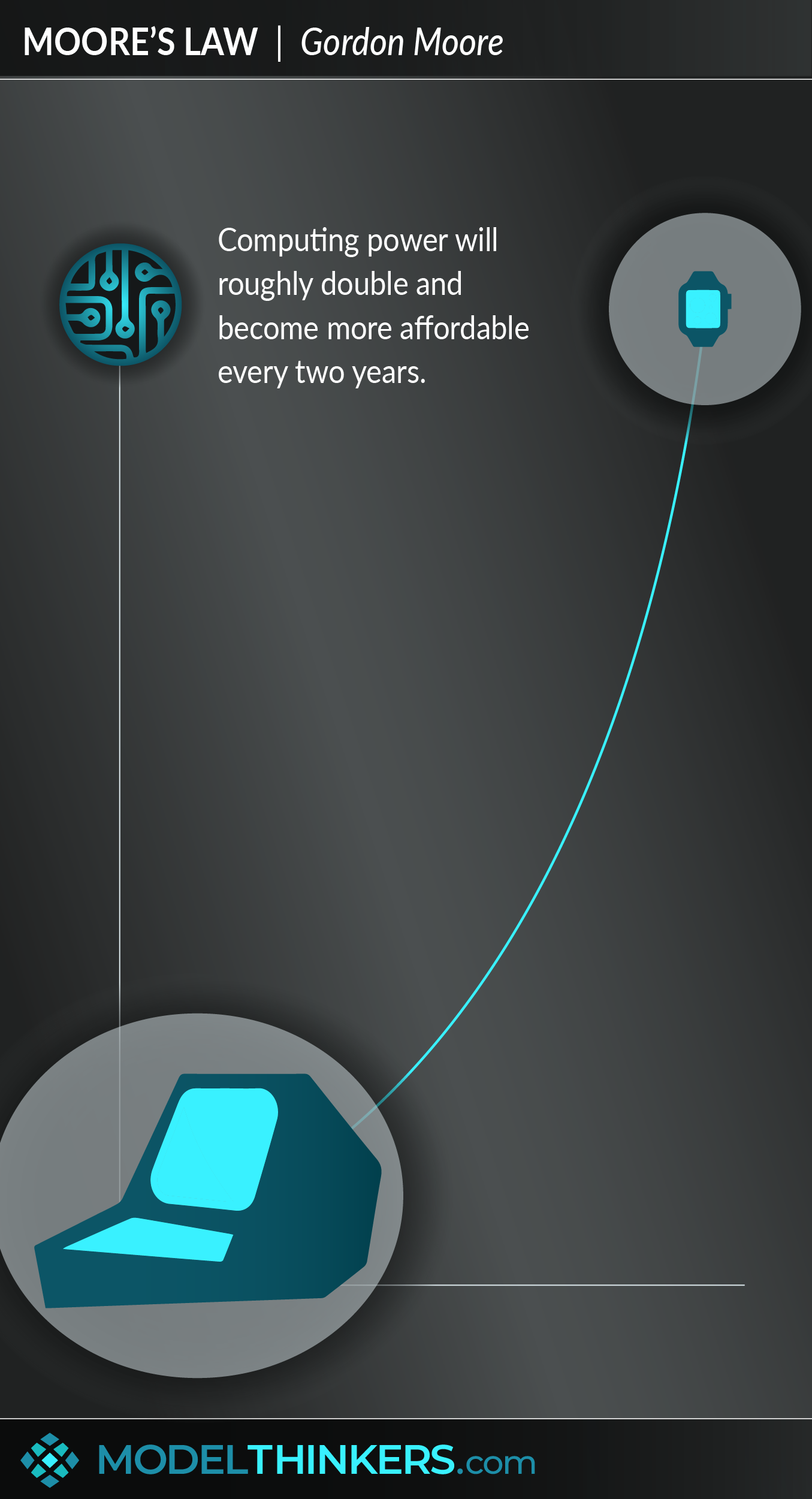 Read this before you over-invest in the latest tech platform, decide to lease rather than buy that new computer, or expect to resell your smartwatch with little depreciation.

Moore’s Law, in simple terms, states that computing power will roughly double every two years and will continue to become more affordable.

The law was inspired by Gordon Moore, the co-founder of Intel, who noted in 1965 that the number of transistors in a dense integrated circuit doubles every 24 months. This served as a prediction of exponential increases of transistor density and overall performance.

The law has been relatively accurate with basic smartphones today far surpassing the processing ability of the original generation of supercomputers. At the same time, continued exponential growth in computing power has been mirrored with economies of development and costs to the consumer.

THE FUTURE OF MOORE'S LAW?

In marking the 50th year anniversary of the law in 2015, Moore himself noted that his original prediction was looking forward to the next 10 years and “it has to stop. No exponential like this goes on forever.” Still, it has remained a guiding principle for the computing industry.

A common application of Moore’s Law for many individuals and businesses is understanding that the brand new shiny computer you’re about to buy will soon be redundant as it is outstripped by new developments. You still might continue with the purchase but include it’s likely lifecycle into your cost calculations — or consider leasing.

Designing a tech or digital solution presumes that you are engaging in an area of ongoing rapid, if not exponential growth and that your product lifecycle might take surprising turns or require higher adaptability to engage with that growth.

While the ongoing impact and sustainability of Moore’s Law is a contested issue, it is likely that further developments in conjunction with the increasing affordability of computing power will see greater and more immersive impact on our society.

Explore More
Moore’s Law is featured in these playbooks:

Moore’s Law is not a law in a scientific sense, more an observation and predictive mental model. To that end, some have argued that it is self-fulfilling, with companies feeling the need to keep up with Moore’s law — though that seems like less of a limitation and more of a complement.

However, that has been a point of debate when taking Moore’s Law as a loose definition of exponential growth. While computers won’t necessarily improve in the ways Moore originally referenced, advancements in cloud computing, quantum physics and the internet of things are likely to create other forms or rapid development.

The reducing cost of technology.

Moore’s law is a model used to understand the rapid development of technology.

Use the following examples of connected and complementary models to weave Moore’s law into your broader latticework of mental models. Alternatively, discover your own connections by exploring the category list above.

This law was inspired by Gordon Moore, co-founder of Fairchild Semiconductor and CEO of Intel. He made the observation in 1965 when he projected the rate of growth for another decade and has expressed surprise at how long the phenomena has persisted.

Also, consider whether some have been too quick to claim that Moore’s law is dead by viewing this in-depth opinion piece in Venture Beat.