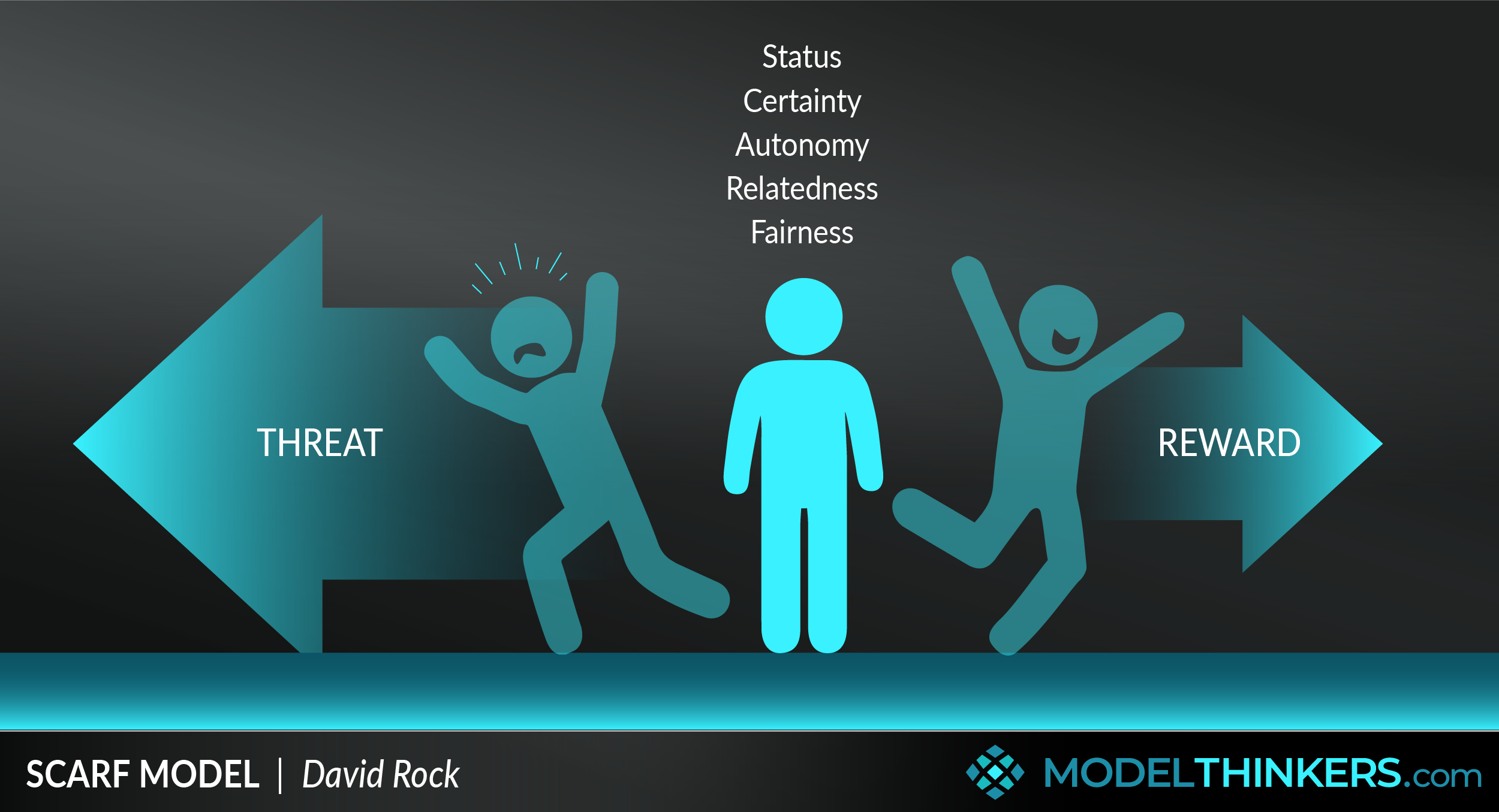 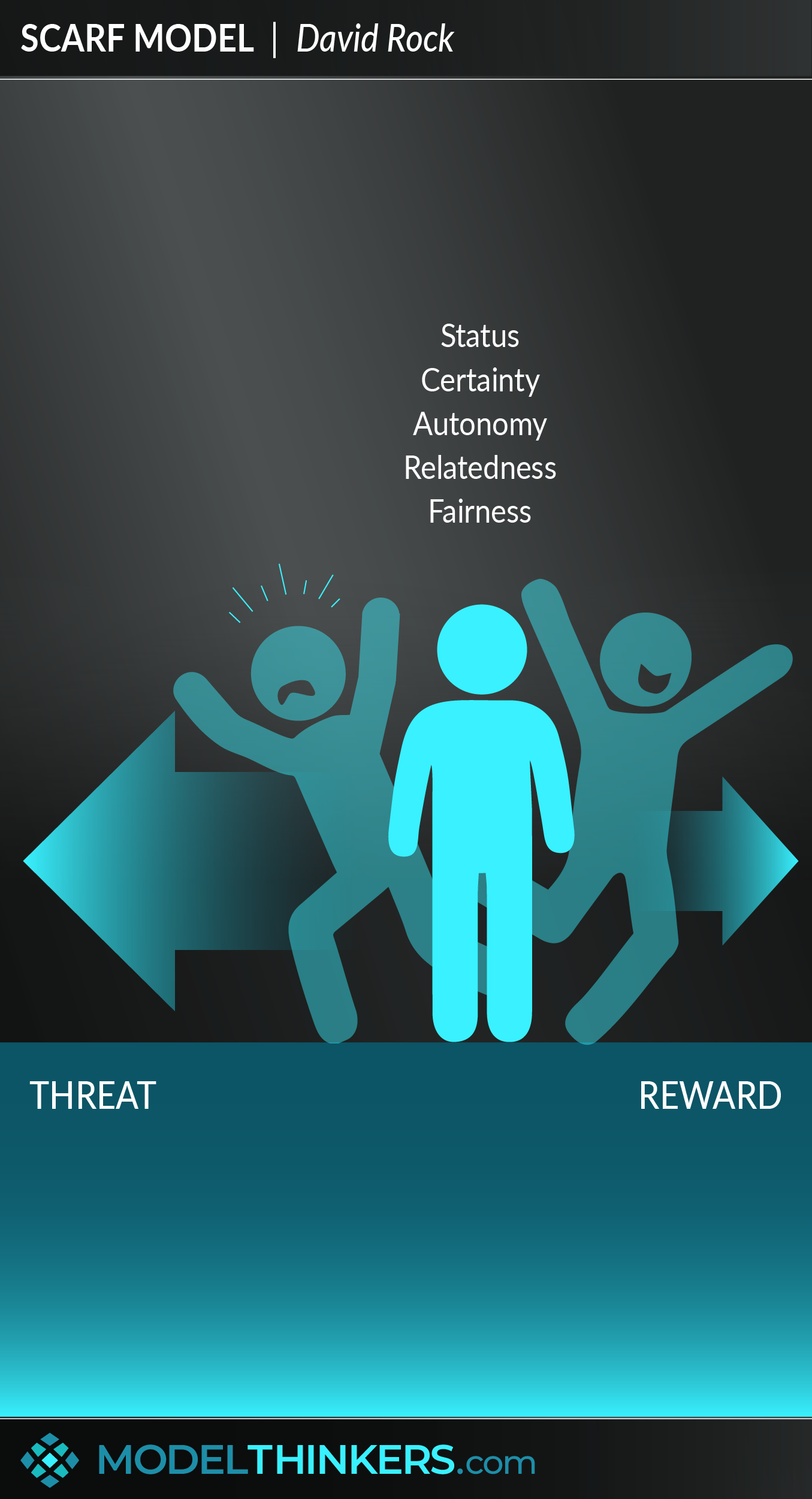 You've probably noticed that humans are generally irrational beings largely driven by fear of threats and, to a lesser extent, the promise of rewards. The good news? Understanding your underlying drivers can help you to be a more effective person and better leader.

A TOOL FOR LEADERSHIP.

Understanding and acting on these factors can provide greater self-awareness and personal effectiveness, as well as enable more effective leadership, influence, and collaboration. The model particularly considers rewards that encourage an ‘approach’ response and threats that lead to an ‘avoid’ response, as motivated by five stimuli.

THE FIVE STIMULI IN MORE DETAIL.

The five stimuli are:

Importantly, when you are in a threat state — potentially triggered by any of these stimuli — your brain sinks into a ‘limbic’ mode, incapable of effective higher-order thinking or social interaction.

In other words, when you’re threatened, your conscious brain will leave the building and leave your actions to the whim of that prehistoric 'lizard brain' you’re still carrying around. By contrast, when you're in the reward state, your brain is able to be more creative, thoughtful and collaborative.

If you’re recognising some similarities with the Psychological Safety model, you’d be absolutely right. Both models identify similar issues though take a slightly different approach to address it.

Rock tends to use more ‘neuroscience-inspired' terminology, and the cynic in me knows that using such terminology can be more persuasive. But, cynicism aside, the strength of Rock’s model lies in providing a specific checklist that can be used by leaders to better create safety for themselves and others.

Start with yourself and bring awareness to whether you are in a threat or reward state. Go deeper by checking yourself against the SCARF stimuli and consider what you can do to shift your current state as a result.

When leading or collaborating with others, consider their potential state and openness to collaborate based on the SCARF factors. If one element is lacking, potentially driving them towards a ‘threat’ response, understand the limits of potential engagement until that factor can be addressed or it can be mitigated by providing greater rewards through the other factors.

Work to reduce threats and increase rewards in each of the areas:

Explore More
SCARF Model is featured in these playbooks:

The Art of Change Management.

There is an inherent challenge of applying the SCARF model once threat responses are already triggered given that higher-order thinking and problem-solving are reduced in those situations. This particularly relates to applying it for self-awareness.

In many situations when applying it to support collaboration, it will be problematic to ascertain the likely state of others, who will respond in unique and different ways to each of these factors.

This 2015 article in HBR by David Rock explored the tendency for senior executives and CEOs to be less stressed than other workers. Rock uses his SCARF model to frame and understand this tendency, arguing that more senior leaders have greater status, certainty and autonomy so are more likely to be in a reward state.

The SCARF model sheds light on the way people either exist in a threat or reward state that will, in turn, affect collaboration, thought and decision making.

Use the following examples of connected and complementary models to weave the SCARF model into your broader latticework of mental models. Alternatively, discover your own connections by exploring the category list above.

This model was created by David Rock of the Neuroleadership institute. The group runs a range of leadership and coaching programs that incorporates the model.