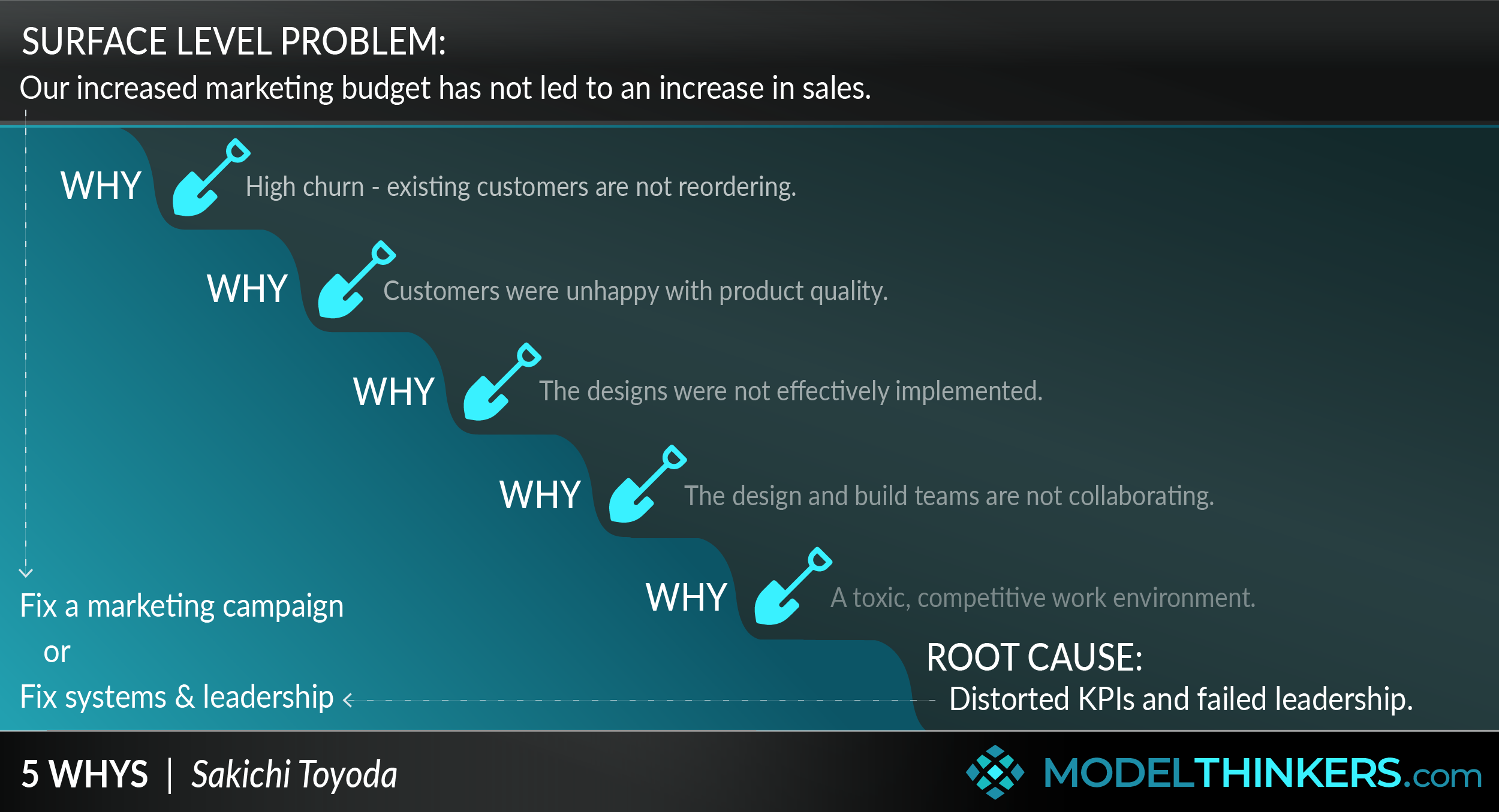 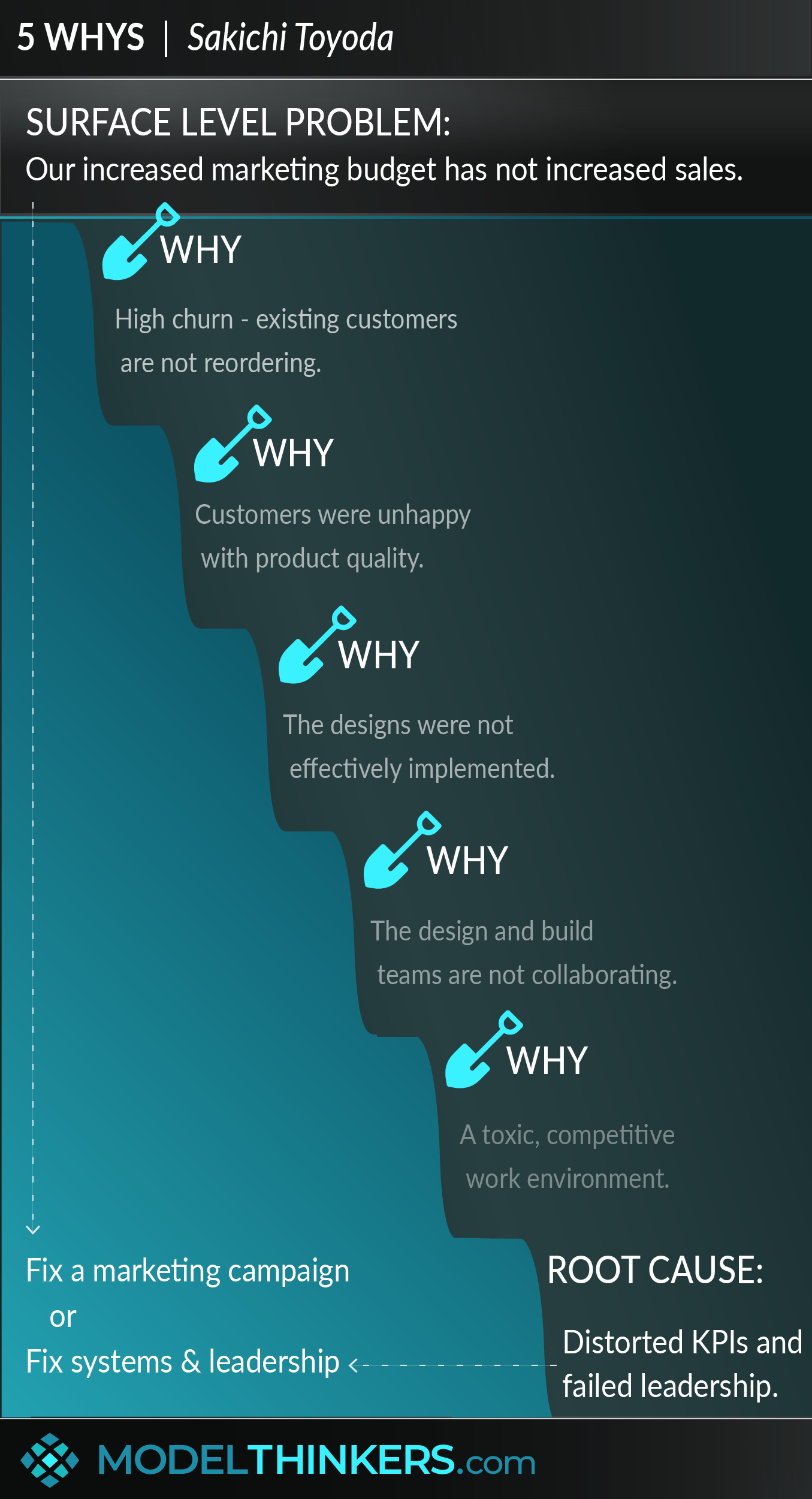 Before reacting to a stated problem or pain point, consider whether you're just working on the surface, or addressing the root cause challenge.

5 Whys is a deceptively simple process of repeatedly asking ‘why questions’, five times, to identify and address the root cause behind an initial problem.

Asking 5 Whys allows you to dig beyond the obvious or initially presenting cause, to consider at least four additional layers of sub causes below that. As a result, you can invest in dealing with the immediate and additional sub causes proportionally, as required.

The image above presents a simple example where the initial response might involve launching a new marketing campaign. Instead, the 5 Whys help to uncover deeper issues of dysfunction, including a root cause challenge around systems and leadership.

This model is particularly useful in response to a surprising event or problem because asking why 5 times will help you to develop a deeper understanding of context and patterns behind the surface issue.

The 5 Whys can be used as part of a Framestorming process to challenge problem statements and questions.

It will often need to be applied to several causal factors and can be incorporated into an extended Fishbone Diagram or Design Thinking inspired process. It can also help to differentiate between Correlation vs Causation.

Establish the issue you wish to address and who might be best positioned to input into the conversation. Because you are aiming to go beyond the obvious cause, this will ideally involve a broad group.

Consider an initial causal factor to focus on and dig into deeper. This is your initial ‘why’.

Follow the logic trail deeper into the root cause by asking ‘why?’ repeatedly.

Where human factors are identified, use the approach to target processes and environmental factors behind that rather than pointing the finger at individual behaviour and attributing blame. If a cause was based on ‘human error’, ask why to consider the factors that allowed or enabled that to happen.

Be sure to focus on and confirm causal factors rather than symptoms or correlated events. Encourage participants to keep an open mind rather than leading the process to confirm a prior conclusion.

This process can uncover the root cause, however, it’s often essential to address several layers of cause proportionately — to address both the immediate pain point and starting to shift the underlying root cause.

Explore More
5 Whys is featured in these playbooks:

Given it's often based on qualitative interviews and collaborative sessions, the 5 whys is prone to cognitive biases — this is reflected by different groups generating wildly different responses about the same problem. As such, the approach is better positioned as developing a hypothesis that can be further tested.

The approach tends to focus on depth over breadth, fixating on a line of causal relationships rather than considering other possible factors. This can be mitigated by repeating the process and/or using as part of a fishbone diagram.

Finally, the results of 5 whys will ultimately depend on the level of insights and analysis from the stakeholders involved, so the makeup of the actual investigative group is crucial.

Toyota provided an example of applying the 5 whys in one of their factories when a robot stopped working.

The circuit has overloaded, causing a fuse to blow.

2. ‘Why is the circuit overloaded?’

There was insufficient lubrication on the bearings, so they locked up.

3. ‘Why was their insufficient lubrication in the beginning?’

The oil pump on the robot is not circulating sufficient oil.

4. 'Why is the pump not circulating sufficient oil?’

The pump intake is clogged with metal shavings.

5. ‘Why is the intake clogged with metal shavings?’

Because there is no filter in the pump.

This very short presentation by Harvard’s Amy Edmondson explores how root cause analysis revealed that Psychological Safety was behind the disaster — with a toxic culture at NASA allowing the problem to go unaddressed until it was too late.

In other comments, Edmondson has discussed the 5 Whys as part of the approach to digging past the initial problem (foam strike) to the real underlying problem (the culture and lack of Psychological Safety).

5 whys is an important part of lean methodology and six sigma and can help to reveal root causes in a range of contexts..

Use the following examples of connected and complementary models to weave the 5 whys into your broader latticework of mental models. Alternatively, discover your own connections by exploring the category list above.

The 5 whys approach was developed by Sakichi Toyoda as part of the Toyota Production System and became an important part of lean methodology.

Taiichi Ohno, considered to be the founder of the Toyota Production System discussed its importance in his seminal book Toyota Production System, stating that: “The basis of Toyota’s scientific approach is to ask why five times whenever we find a problem … By repeating why five times, the nature of the problem as well as its solution becomes clear.“