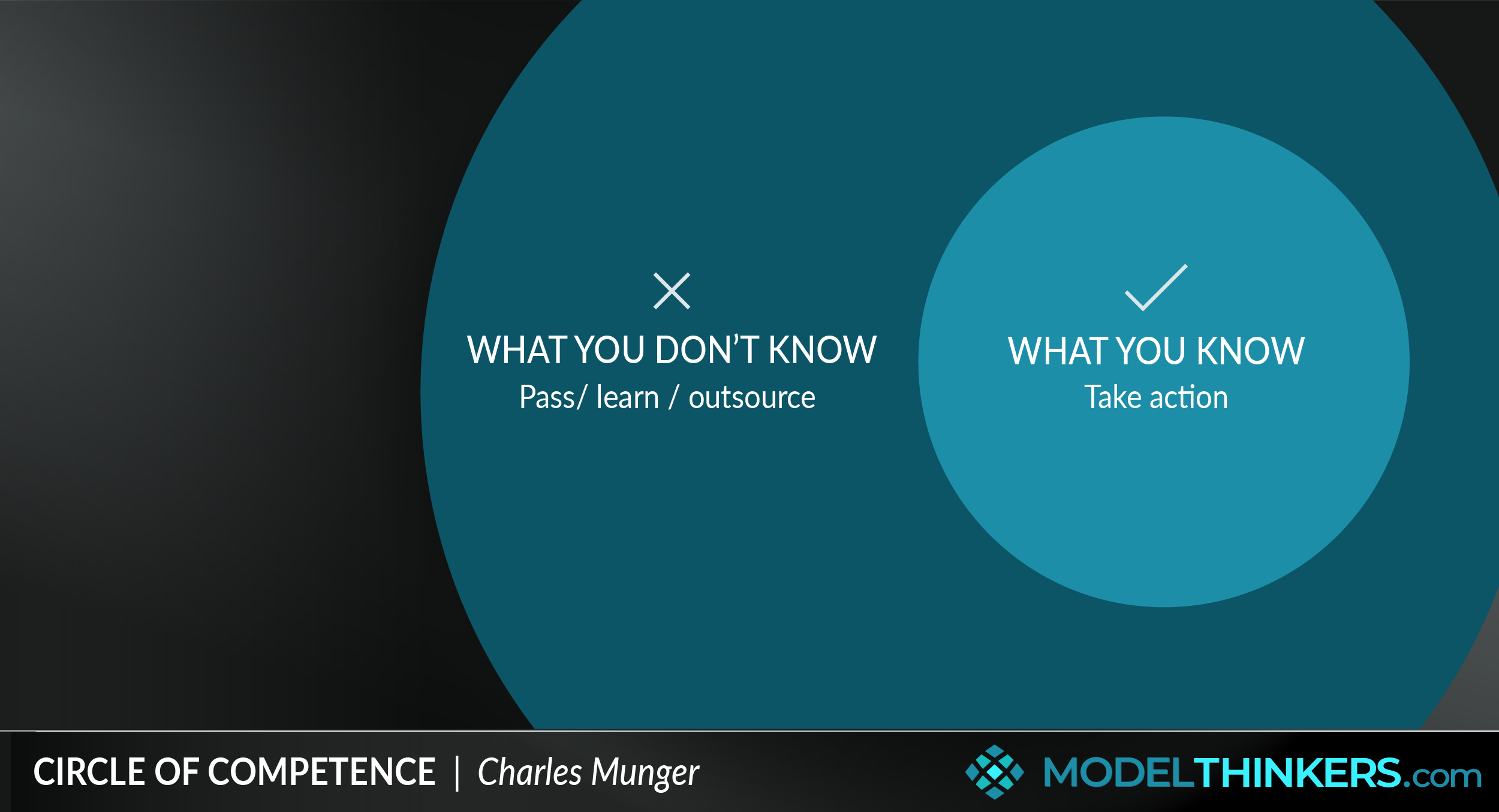 Do you want to act from a place of strength for the greatest impact?

Your Circle of Competence identifies your current area of knowledge and expertise as a guide for effective action.

MUNGER ON USING THE CIRCLE.

Charles Munger explains: “I do know my Circle of Competence and I stay within that. I don’t worry about things that are outside that circle. Defining what your game is and where you’re going to have an edge is enormously important.”

When faced with a necessary decision point outside of your circle of competence, you can pass on it; choose to grow or supplement capability by developing yourself, or seek expert input.

When trying to understand this concept, it is crucial to distinguish between what we think we know and what we really know. It takes a high degree of self-awareness, courage and humility, as well as being open to evidence, to clearly identify and state those boundaries.

Identifying and acting from your circle of competence involves acting from a place of strength and relative certainty. It reduces risk and is more likely to achieve desired results.

Passions and interests are an indicator of your likely Circle of Competence, though they are not always the defining factor.

Identify other people’s circle of competence, especially key collaborators, and engage with them from that standpoint — extracting expertise from their places of strength.

Your Circle of Competence is not static, use it to identify the boundaries of your expertise so you can continually challenge yourself and grow.

Work with people who have complementary circles of competence to round out and achieve effective decisions.

Be courageous in identifying and stating the boundaries of your Circle of Competence while still being prepared to discover more.

My Notes
Delete note
Explore More
Circle of Competence is featured in these playbooks:

Identifying the limits of your Circle of Competence is likely to be unreliable in the context of unconscious bias, particularly the illusion of competence.

This mental model might be interpreted as an argument to focus on specialising deeply at the expense of extraneous knowledge domains. However, it might be argued that broadening your understanding of a range of fields will add to your existing specialist knowledge

Finally, given that learning generally requires moving into areas of uncertainty and discomfort,

it could be argued that focusing on your circle of competence prevents opportunities to learn.

Andrew Carnegie, a well-known industrialist of the 19th century,  is considered as the possible originator of this mental model, arguing that people should concentrate their time, money and investments solely within their circle of competence. He practised this approach by focusing on the steel industry.

In the documentary Becoming Warren Buffet, Charles Munger discussed a baseball comparison when considering the circle of competence. He referenced a lesson from a book entitled ‘The Science of Hitting’, which discussed a baseball batter’s approach to break down the batting zone into 77 segments. The batter understood his chance of hitting in each segment, clearly identifying his hit zone or circle of competence.

Munger explained: “I can look at a thousand different companies, I don't have to be right on every one of them, or even fifty of them. I can pick the ball I want to hit. The trick to investing is to just sit there and watch pitch after pitch go by and if people are yelling ‘swing you bum’. Ignore them.”

The circle of competence requires a level of self-awareness. While used by Buffet in an investment context, it  can be applied quite broadly.

Use the following examples of connected and complementary models to weave the circle of competence into your broader latticework of mental models. Alternatively, discover your own connections by exploring the category list above.

The concept was loosely outlined by Warren buffet for the first time in his 1996 shareholder letter although Charlie Munger has helped to popularise the mental model. A similar approach can be traced all the way back to Andrew Carnegie.

Think Differently to Navigate Covid
Models for the plague.