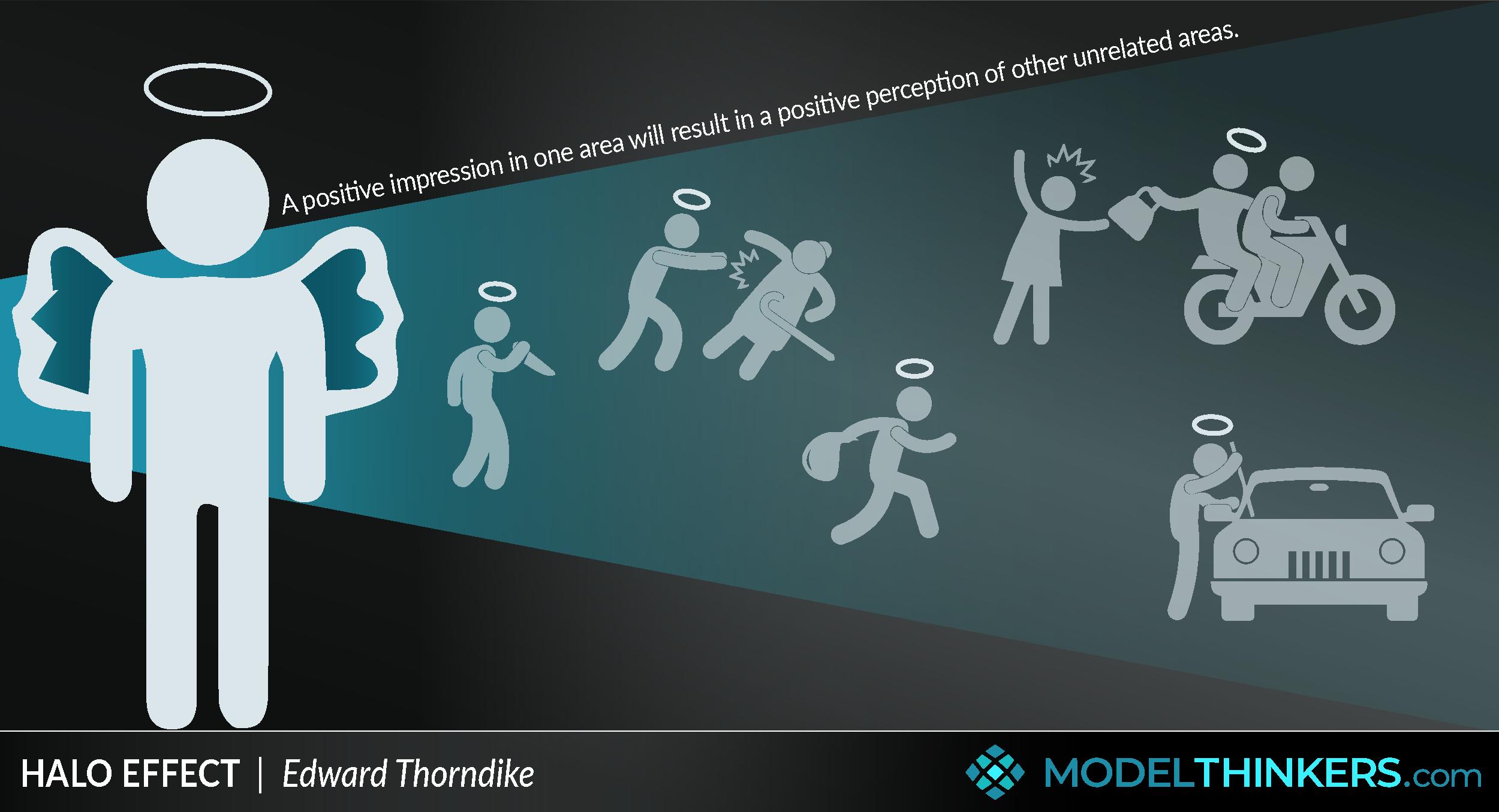 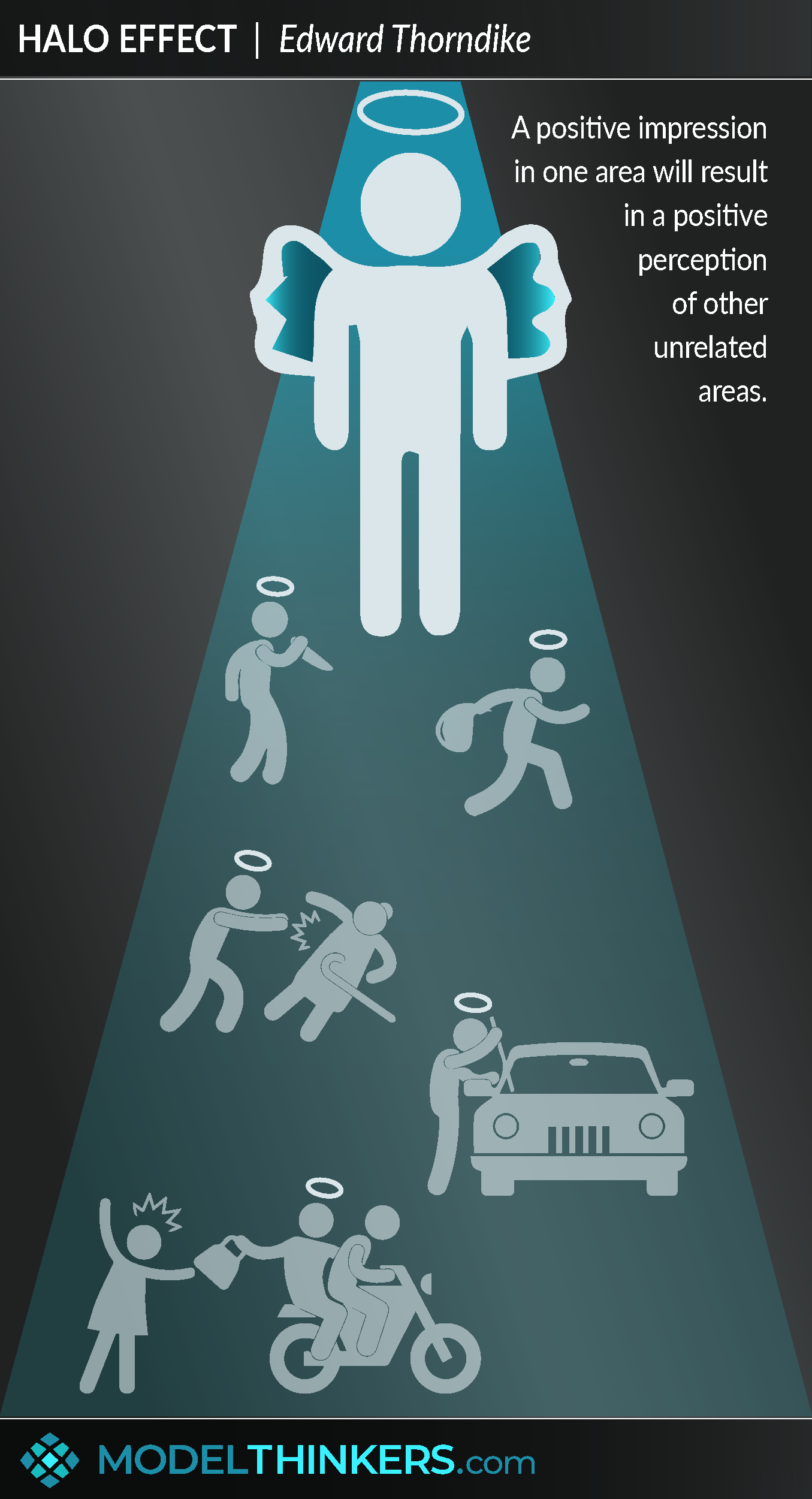 “The statement ‘Hitler loved dogs and little children’ is shocking no matter how many times you hear it, because any trace of kindness in someone so evil violates the expectations set up by the Halo Effect.” – Daniel Kahneman.

The Halo Effect describes how a positive impression of a person, thing, or company in one area will result in overall positive perceptions of other unrelated areas.

The Halo Effect is a cognitive heuristic or bias that can be understood in the broader context of Behavioural Economics and Fast and Slow Thinking. The point is that your brain instinctively constructs Mental Models from limited information so that you can take action and make snap judgments. Like all heuristics, it has value as a shortcut, and can be disastrous in a range of contexts.

See the Origins tab below for Edwards Thorndike’s original military research and subsequent studies which have revealed that strong impressions, and particularly first impressions, tend to define broader perceptions.

The Negative Halo Effect, sometimes referred to as the ‘Horn’ or ‘Devil’ Effect, is where a negative impression drives a range of negative assumptions. For example, meeting someone who has a crooked nose or is constantly sniffing, and subconsciously making assumptions about their ethics or intelligence. We know, it sounds petty, but your subconscious will go there.

The list continues with hiring, law, and any domain involving people making snap judgments of others — so life! See Actionable Takeaways below for strategies on how to interrupt and mitigate the Halo Effect.

We’ve mentioned Fast and Slow Thinking as the framer of all cognitive biases, and in that realm, the Halo Effect is quite connected to the Confirmation Heuristic and Anchoring Heuristic. Beyond that, the Map vs Territory, which is one of our favourite models, goes a long way to explaining the Halo Effect. It’s a reminder that our mental models of reality are not in fact reality.

In a business context, the Halo Effect might help to explain the Lock-In Effect and customer loyalty. It is also an important factor in developing influence and could be used in conjunction with Cialdini's Six Principles of Influence, particularly likability.

Knowing the central role of first impressions in establishing the Halo Effect, it’s worth investing time and energy to lead with a positive bang.

Knowing that a single strength can buy you a positive view of other aspects, consider how to lead with and highlight your strengths upfront.

If you believe that you are a victim of a Negative Halo Effect, where your inputs are being impacted by a negative impression, it might be worth facing into this head-on, stating your belief that you have other key strengths and would like the opportunity to prove it. Though how upfront you are will vary with context.

Accept that you will be a victim of the Halo Effect in how you judge… well, everything! Interrupt it by going ‘blind’, for example marking papers without viewing names, hiring based on the information and no images etc. You can also rely more on the actual data, rather than your impressions to make a decision.

Knowing that your broader perception will be overly influenced by your impression, you can consciously construct two impressions. For example, when meeting someone for the first time, rather than relying on a default impression, also construct an opposing impression. Treat them as alternative hypotheses that you will test out and define with further information.

When working with an expert, remember what their experience and knowledge is focused on, and don't assume that they will have the same capability in other areas. Essentially, be aware of their Circle of Competence.

When someone delivers information or asks for something, pause, and ask ‘how would I respond if that request came from x?’ Where x is someone you have a completely different impression of. By substituting the messenger with a few alternatives, you will be able to focus more on evaluating the message and will reduce the impact of the Halo Effect.

Explore More
Halo Effect is featured in these playbooks:

There has been considerable research and evidence of the Halo Effect in a range of domains, and it is a long-established cognitive bias. The only limitation that we can call out is that, while it might be at play in a given situation, it’s likely not the only bias or factor to consider.

Edward Thorndike first coined the Halo Effect when studying how military officers judged their subordinates in a 1920 study. The officers would not talk to the men (yes, all men, it was 1920 after all), but consistently rated their intelligence and character based on physical strength and attributes.

The constant hiring of celebrities to represent companies is an example of those companies trying to benefit from the celebrities Halo Effect. It’s also why such celebrities are quickly dropped at the first sign of a scandal or negative consumer perception.

The Halo Effect was identified in broad terms as far back as 1907 by Fredrick Wells, a US-based psychologist. However, Edward Thorndike is credited with coining the effect in 1920 and essentially defining it as a cognitive bias.

Thorndike’s conclusions came from studies with the military where officers were asked to rate subordinates on a number of traits such as physique, character, leadership, and intelligence without having spoken to them. Thorndike noted that the officers’ judgment of a range of qualities was consistently driven by unrelated physical attributes. Basically, the servicemen who were taller and looked stronger were consistently rated as more intelligent etc.

There have been a number of studies supporting these findings in a range of domains. And, in 1964, Polish psychologist Solomon Asch found that first impressions were more important than subsequent impressions in establishing the Halo Effect.