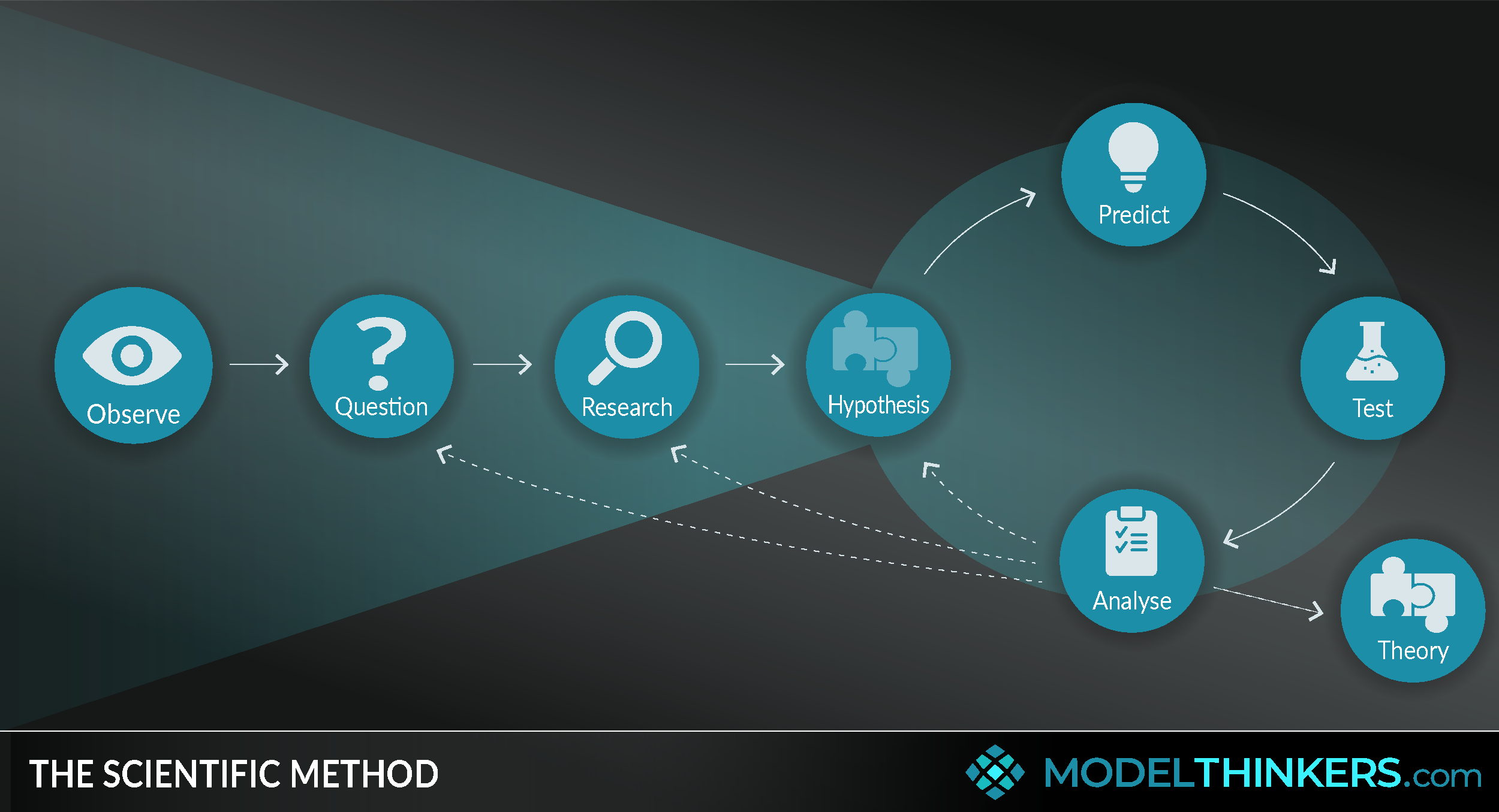 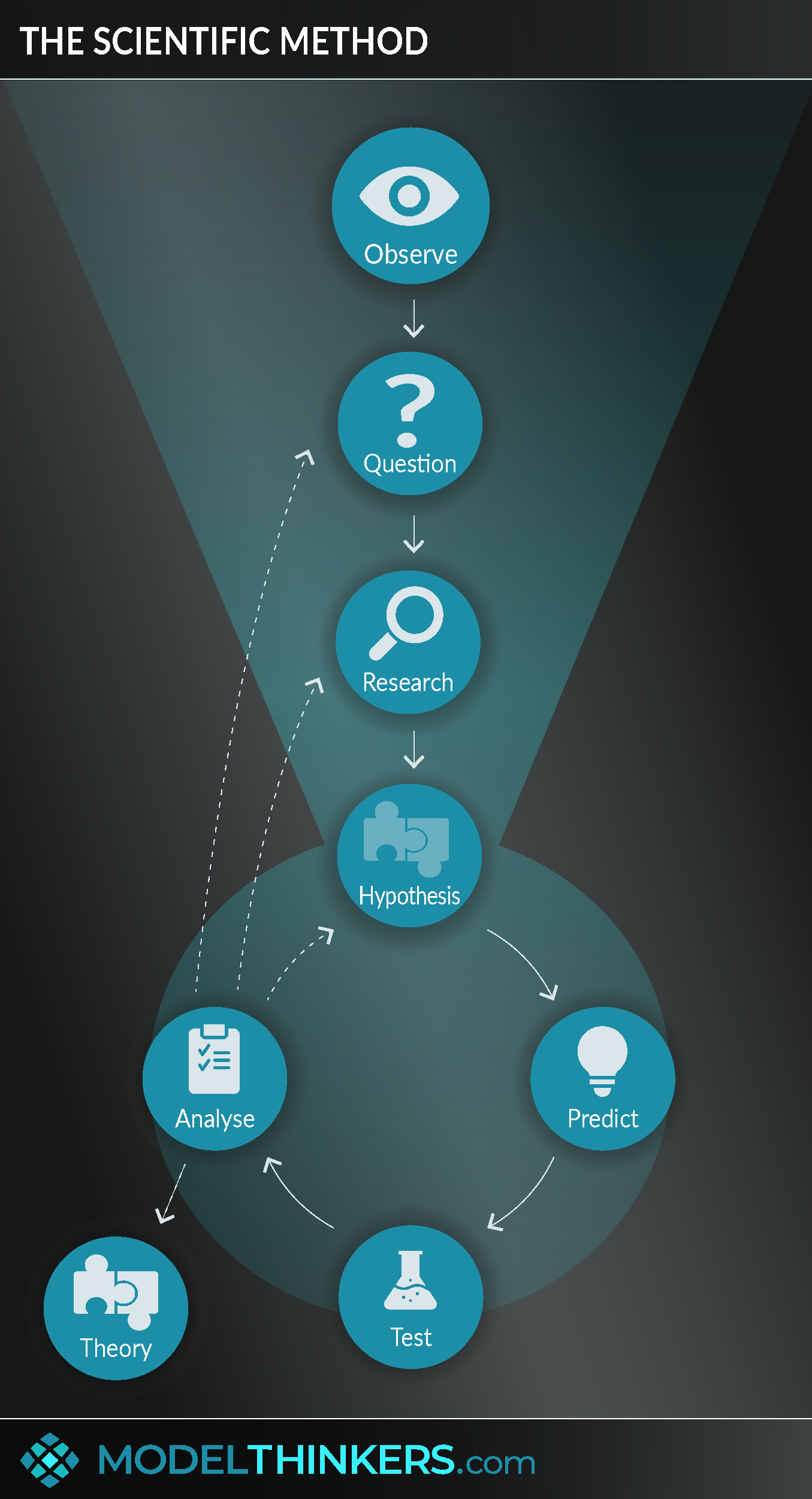 We'd argue that this is one of the most important mental models in our collection, after all, it holds the key to improve your understanding of everything. It represents a way of thinking and engaging with the world around you that can inform your life, relationships and work.

The Scientific Method is a systematic way of learning about the world and answering questions which involves establishing and testing a hypothesis through experimentation.

While the specifics steps will vary from source to source, the Scientific Method is often captured in the following six steps:

The Scientific Method relies on the ability for tests to be replicated and the same results to be achieved by other similar experiments. In addition, it generally relies on controlling variables — so experimenting in a ‘closed environment’ where the main variable being tested relates to the hypothesis in question. That said, there has been a rise of field, or ‘real world’ experiments, in domains such as behavioural science.

The Scientific Method inspires and is linked to many other models in our collection. You'll see its influence on Agile Methodology, in Feedback Loops, Split Testing and even the Cynefin Framework and OODA Loop.

The process of identifying and testing assumptions that the Scientific Method demands, can also be seen in First Principles and Occam's Razor. Of course, even using the Scientific Method won't totally protect you from biases such as the Confirmation Heuristic, and Causation vs Correlation, but it is perhaps the best tool we have to address such challenges.

The Scientific Method is premised on curiosity and openness about the world around us. Asking questions about things that most people simply accept is the beginning of a scientific mind.

Rather than seeing your views as fixed, use hypotheses, or a proposed explanation, that you can set up conditions to test. For example, when considering a new product you might have a hypothesis about a customer need that you are addressing. Using The Scientific Method would involve setting up a test to validate or falsify that hypothesis.

Applying The Scientific Method involves actively seeking data and evidence to prove or disprove your theories. It means remaining open to the evidence, wherever it might take you.

Explore More
The Scientific Method is featured in these playbooks:

A major impediment against using The Scientific Method lies in pre-existing beliefs which alter the interpretation of results, often as a form of the Confirmation Heuristic. It's not a criticism of the method, more of those who try to wield it.

There are countless examples of The Scientific Method  we could point to across history — it's behind almost every major technical or conceptual advance humanity has made. But we particularly like the story of Millikan and Einstein.

In 1905 Einstein published a paper on the particle theory of light including what is known as the photoelectric equation. Robert Millikan, an American experimental physicist, did not believe it because of the vast evidence that light was a wave. He consequently set up experiments to disprove Einstein's hypothesis. Instead, his experiments confirmed the theory and Millikan won a Nobel Prize for his efforts. It's a story of how someone followed where the scientific method led them, despite their preconceived ideas.

Application is everywhere, but not enough.

The Scientific Method is used by countless evidence-based practitioners in diverse fields… and yet we wish it were used more!

A simple example might involve how we develop ModelThinkers. Let's work through the stages we might explore as part of applying a scientific method.

The scientific method is a foundation of science and has informed other evidence-based practices in data, social sciences, behavioural economics etc..

Use the following examples of connected and complementary models to weave the scientific method into your broader latticework of mental models. Alternatively, discover your own connections by exploring the category list above.

The history of Scientific Method stretches back to early civilisation, with written examples that have been identified in Ancient Egypt and Babylonia. For example, a text from 1600 BC in Egypt described a process of medical examination, diagnosis, treatment and prognosis that reflects the method.

The Scentific Method became more explicit in Ancient Greece, with philosophers exploring rational explanations of the world and nature. During this time, philosophers such as Leucippus would hypothesise the theory of atomism, or the idea that everything consisted of invisible building blocks called atoms.

Read The Scientific Method in Practice by Hugh G. Gauch Jr., about the theory and practice of the scientific method. You can also try this short video from the great Neil Degrasse Tyson who uses a story about hot chocolate and whipped cream to explain the Scientific Method.