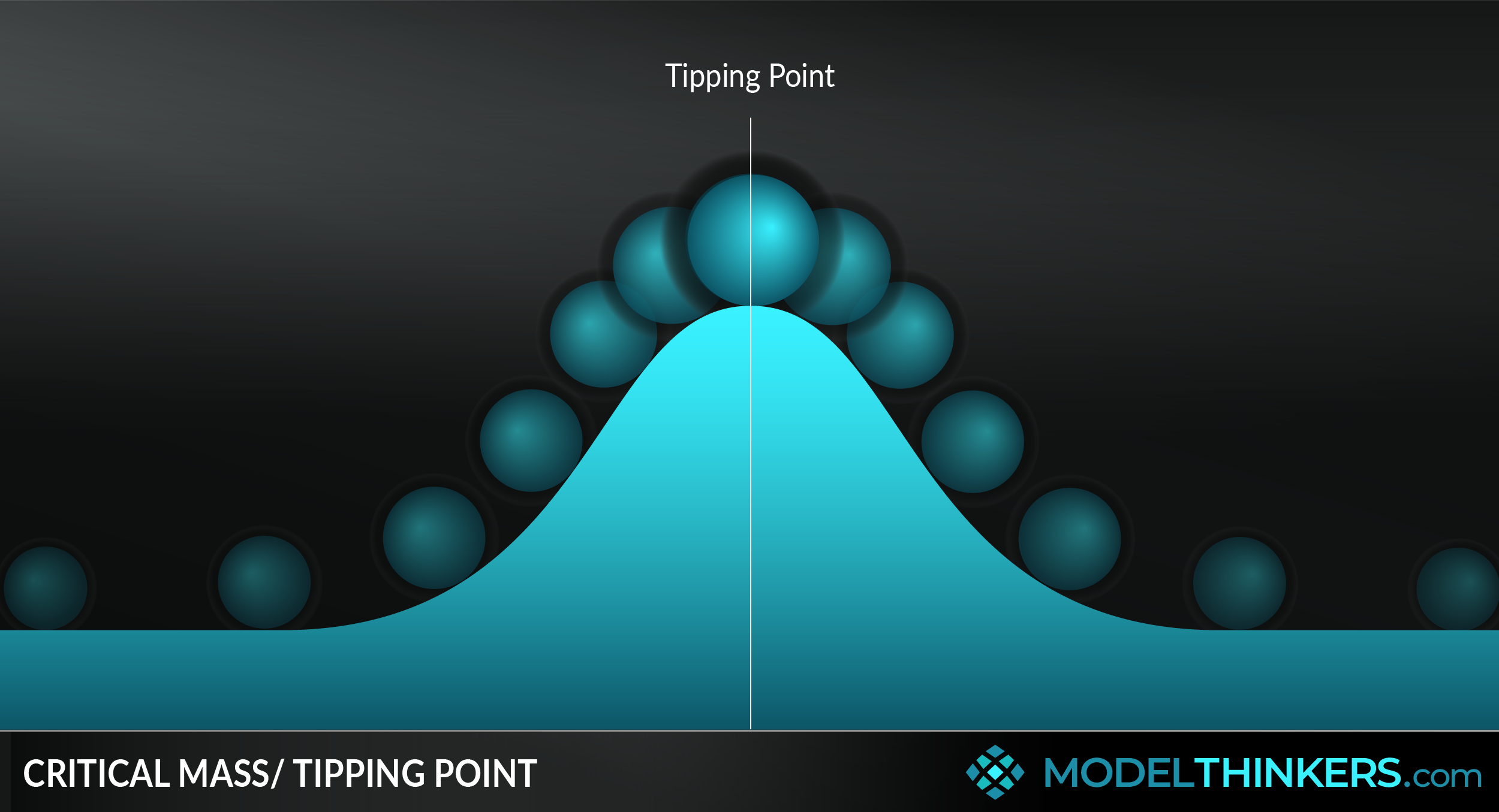 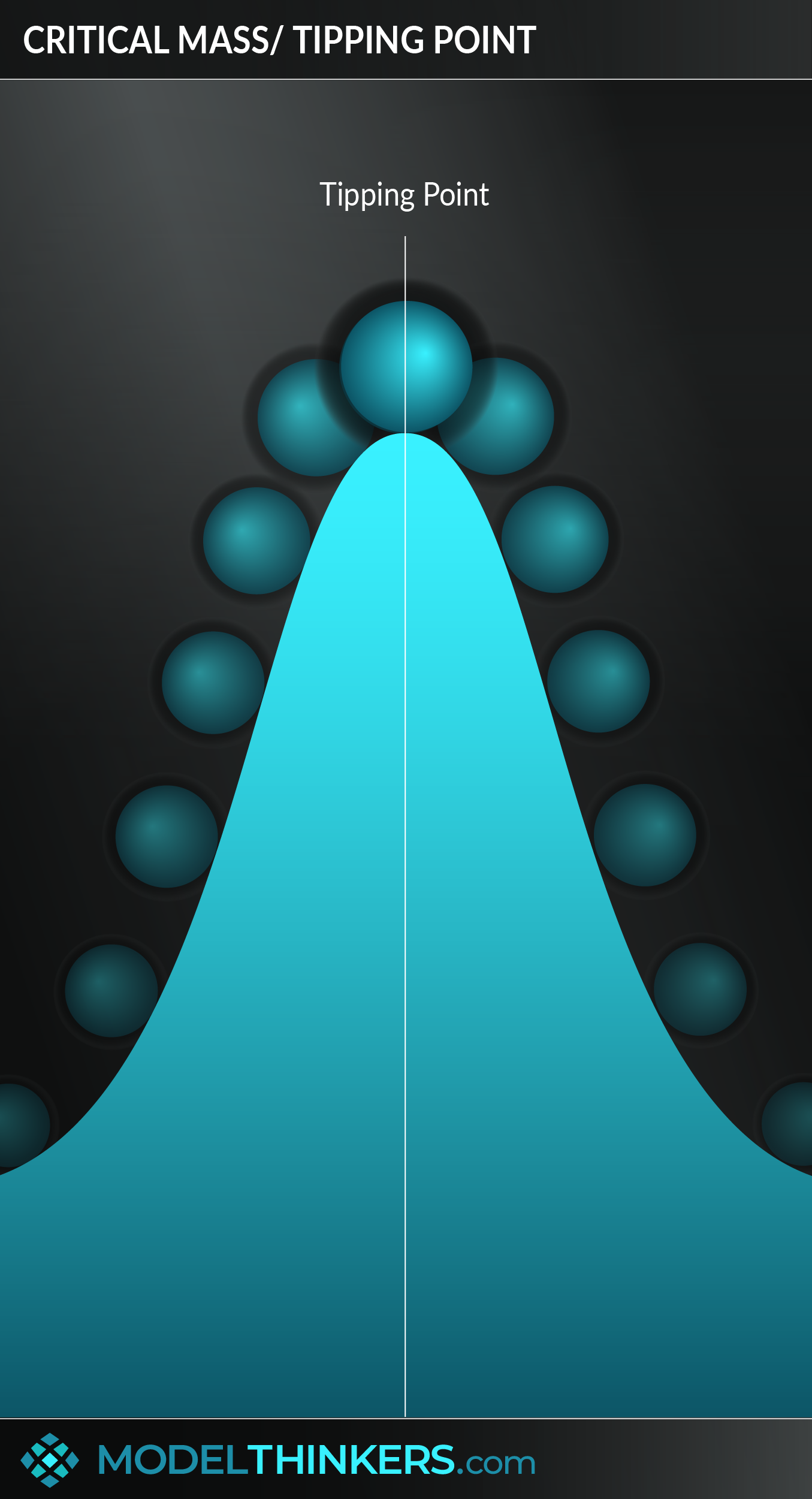 Use this model to remind yourself that change does not always happen in slow, visible and consistent steps. Sometimes, you'll hit an unexpected point of explosive change and undeniable momentum when you least expect it.

Critical Mass, or a Tipping Point, is reached after a period of slow change within a system suddenly accelerates in an irreversible and exponential fashion.

FROM NUCLEAR BOMBS AND VIRUSES.

Critical Mass originated in nuclear physics to describe the smallest amount of material needed to achieve a self-sustaining nuclear Chain Reaction, and in epidemiology to explain the exponential spread of viruses. Today, Critical Mass and Tipping Point have become common and largely interchangeable mental models to explain social dynamics and change.

In his book, Tipping Point Malcolm Gladwell describes how certain 'sticky' ideas reach Tipping Point and hit a moment where they "spread like epidemics" (and no, that did not age well!). He cites the Pareto Principle as playing a key factor in achieving this.

Typical characteristics of a Tipping Point change include its apparent suddenness, even though it has been building for some time; the irreversible momentum that takes place moving forward; and the often exponential nature of that change.

These models help to explain seemingly sudden and radical changes by identifying the transition between slow and hard to notice the progress of an idea/ product/ belief/ video/ message as it spreads amongst a minority before it seems to 'suddenly' hit Critical Mass and ‘goes viral’ as it's quickly adopted by a broader audience.

Use this mental model to understand the change in any domain — from personal development, organisational transformation, political upheaval, product launches, uptake of new technology, marketing campaigns and more.

In addition to the already mentioned Pareto Principle and Chain Reaction, it's worth noting the affinity of Tipping Point and Critical Mass to other mental models such as Activation Energy, Catalysts and Compounding.

You might be working on something that has no hope of 'breakout' success. Perhaps it is a lost cause that barely catches on. Alternatively, you might be reaching a Critical Mass that will return explosive growth. So what's the line between delusion and high-value persistence? Let me know when you work that one out.

Rather than trying to directly shift everyone’s mind or reach everybody with a service or an idea, consider how to reach a Critical Mass/ Tipping Point by targeting a smaller segment with the aim of initiating a self-sustaining and rapidly growing chain reaction.

In businesses that rely on communities or social networks, consider a staged plan. How will it sustain itself and feel like a finished product before critical mass? How will it scale and change once sufficient adoptions levels are achieved? For example, a crowdfunding campaign or new social platform might include an ‘early adopter strategy’ to support an initial focus on cultivating ‘loyal pioneers’ before it reaches critical mass and more scalable strategies are required.

Malcolm Gladwell’s book The Tipping Point identified the disproportionate impact of three groups on reaching tipping point within society. There were connectors, with large social networks; mavens essentially trusted specialists in the area; and salespeople, who are trained in influence and communication.

Gladwell’s third factor after people and stickiness was context. That is people’s approach to change and behaviour will be driven and influenced by environmental factors.

Critical Mass/ Tipping Point phenomena are difficult to control, predict and use to influence large groups. It is impossible to predict the moment when everything collides together and a new concept reaches critical mass so it becomes relevant to a large number of people and is generally used as a retrospective model to understand what has happened.

The phenomenon of critical mass can be used to account for the apparently unexpected adoption of inventions that had existed for a long time before, such as the fax machine. The technology had been invented about 150 years before it became popular, but only in 1987 did the usage of a fax machine reach a critical mass, when its cost became more accessible and people started to assume that everyone else owned a fax machine.

Gladwell referenced the broken window theory in criminology, which states that visible signs of crime create an urban environment that encourages more extreme crime. The aim then is to prevent such minor crime achieving critical mass/ tipping point to more aggressive criminal behaviour. There has since been a backlash and debate of such policing methods that have included ‘stop and frisk’ and ‘zero tolerance’ which many argue impacts on minority and poor communities the most.

The big question: what percentage of the population is required to reach Critical Mass/ Tipping Point for social change?
Researchers at Rensselaer Polytechnic Institute claimed that when 10% of the population holds an unshakable belief, the belief will spread to the rest of the population. Counter to Gladwell’s analysis, according to this work the actual people are irrelevant compared to their commitment to the idea. A more recent study out of the University of Pennsylvania has argued that the critical mass/ tipping point figure is in fact 25% when related to an ‘activist group’. We suspect that there might not be a repeatable number, but that won’t stop us from looking for it too.

Critical mass/ tipping point are powerful and versatile mental models that can be applied to understanding social dynamics in business, politics and other fields.

Use the following examples of connected and complementary models to weave critical mass/ tipping point into your broader latticework of mental models. Alternatively, discover your own connections by exploring the category list above.

The term critical mass has its origins in nuclear physics and, slightly later, medicine. Tipping Point was explored and popularised by Malcolm Gladwell’s book of the same name.

Read Critical Mass: How One Thing Leads to Another by Philip Ball and discover how the critical mass mental model works with examples from history, physics, economics, chemistry, business and politics.