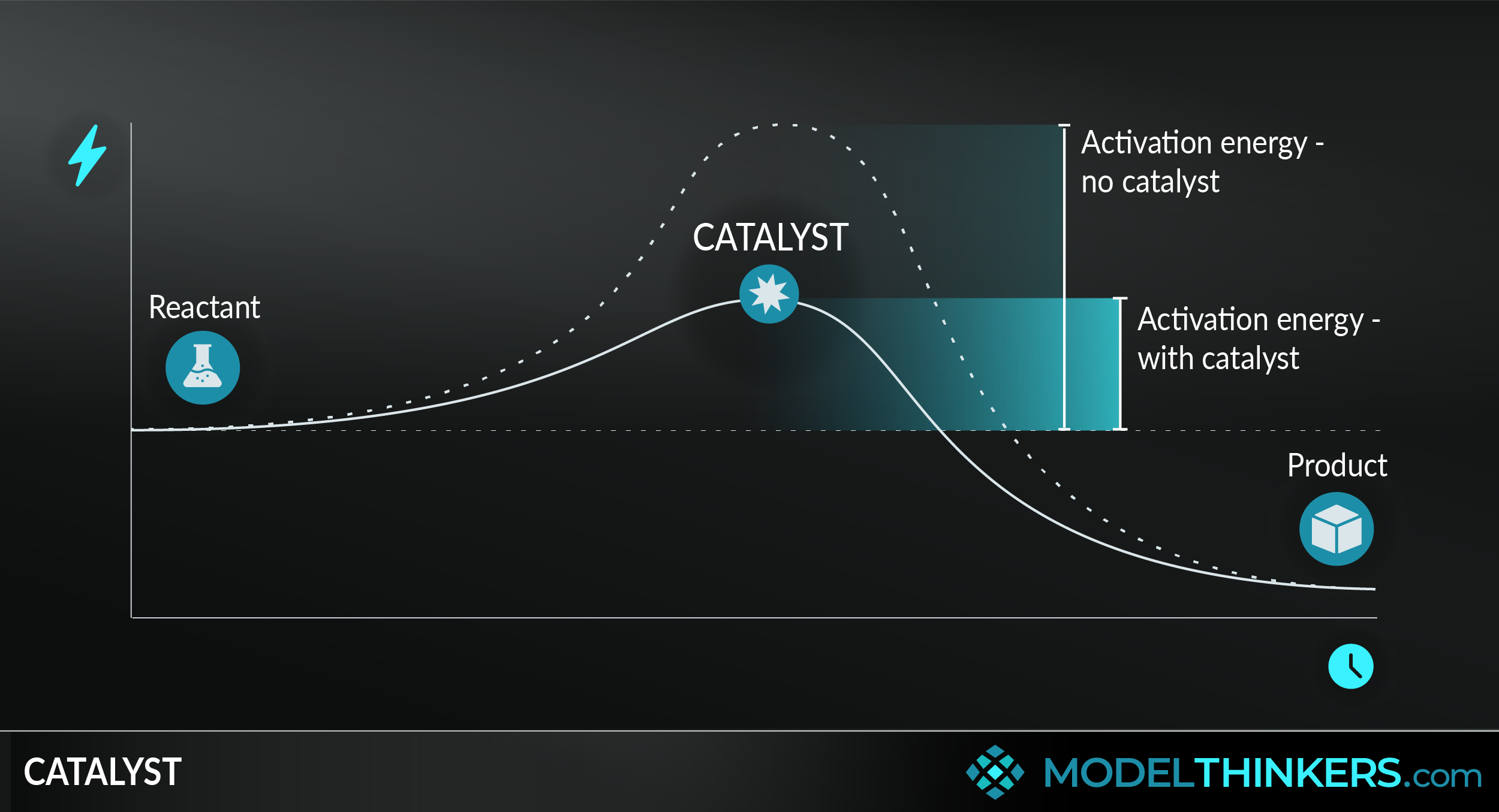 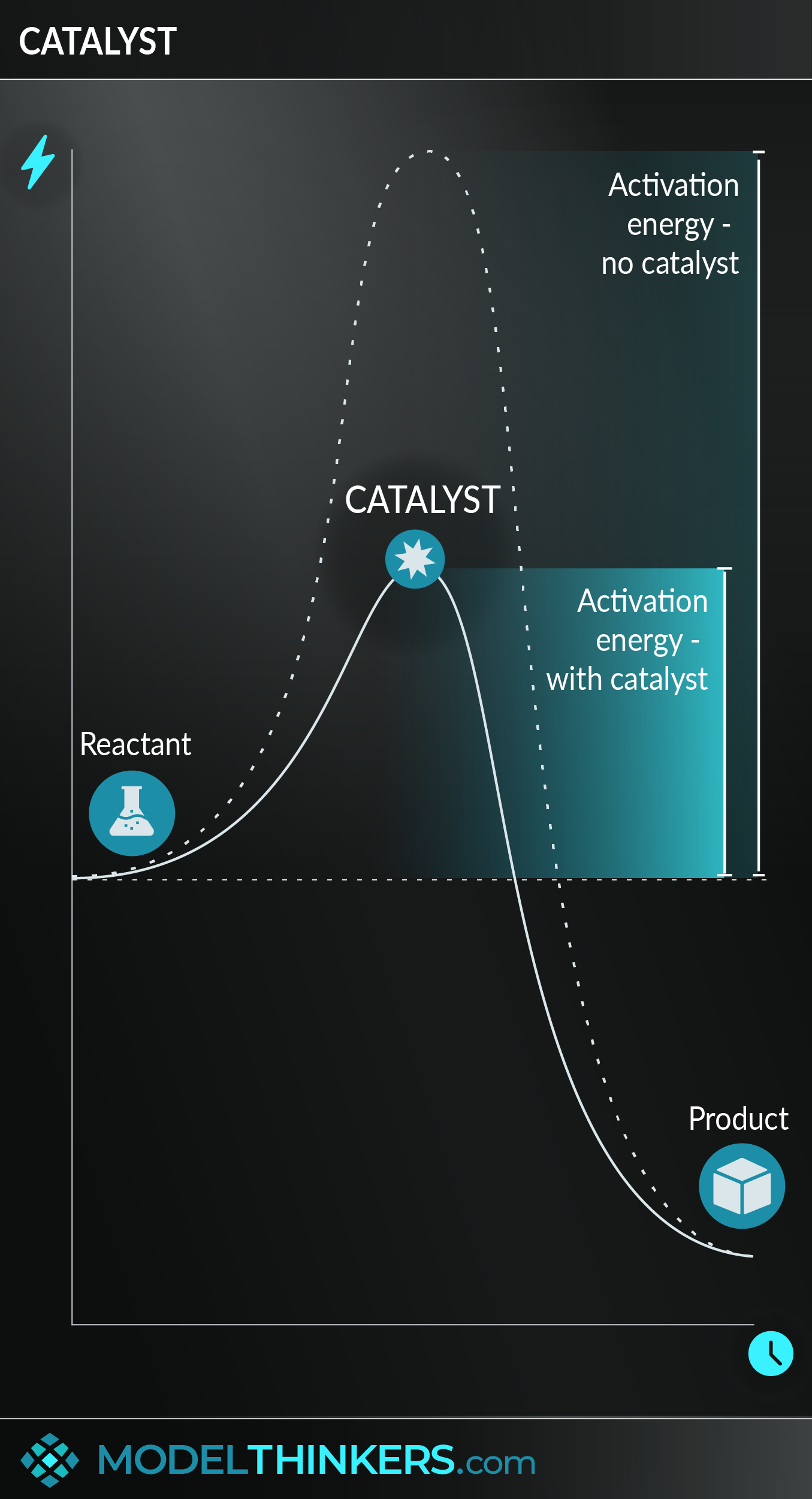 Remember Activation Energy and how it's hard to get started or overcome that initial 'hump' to get moving?

In chemistry, a Catalyst either starts or increases the rate of a chemical reaction without itself becoming a reactant.

Catalysts make it possible to reach the Tipping Point for the reaction using less energy. In broad terms, a Catalyst will help start or increase the rate of change in any situation.

This mental model is often applied in a range of domains beyond chemistry, including social movements, businesses and life. In each instance, Catalysts might initiate and/or accelerate change. For example, it might be as simple as having a cup of coffee in the morning so you get over the Activation Energy involved in starting your day.

For some people, the beginning of a productive day is conditioned by a cup of coffee, while others need to read something interesting that will inspire and motivate them. Think about the catalysts you need to become involved and excited about your work and start using them.

What business model might connect buyers and sellers. According to David Evens, this is usually a platform that encourages groups to interact, cut transaction costs and ‘design for evolution’.

Many parents promise their children dessert to make them eat their vegetables in order to avoid the constant fighting; in a similar way, you can make your business operations less resource-intensive by identifying the right catalysts to reduce the activation energy for change or reduce friction.

Catalysts can help to transform a situation faster, but the ingredients for that change must already exist. A catalyst then can’t solve for inadequate preparation or misjudging the broader context.

Another challenge with catalysts is that while theoretically, they do not become reactants, they often will impact on a change, particularly in business and life applications. This needs to be considered when removing catalysts, which might not just slow a change process down, but transform the nature of what is happening.

Examples of economic Catalysts as a business model

The multi-sided platform strategy as described above is best represented by companies such as eBay, Uber and Airbnb. By nature, the development of these businesses often disrupts existing business models. They tend to represent some of the fastest-growing and largest businesses over the last decade.

Many social movements have had a catalyst, a particular event that triggers broader social protests and change. In 1955 when Rosa Parks refused to give her front-row seat up for a white passenger it led to her arrest. This led to a bus boycott and was the ‘spark’ or catalyst for a broader civil rights movement. In more recent times, the tragic killing of George Flloyd by a white police officer was the catalyst for the Black Lives Matter movement to gain mainstream coverage and impact.

Catalytic converters in your car.

There are many chemistry examples of catalysts. Perhaps one that will be most familiar is how vehicles use catalytic converters to reduce toxic gases and pollutants in exhaust gas from combustion engines into less-toxic pollutants by catalyzing a redox reaction.

Catalysts as a mental model can apply to a broad range of domains that relate to change.

Use the following examples of connected and complementary models to weave catalysts into your broader latticework of mental models. Alternatively, discover your own connections by exploring the category list above.

The concept of a catalyst can be traced back to Ancient Greece, though the term itself was first used by Scottish chemist Elizabeth Fulhame in her 1794 publication of An Essay on Combustion. See more about her story in this Physics Today article.

See  David Evans, Catalyst Code: The Strategies Behind the Most Dynamic Companies for an exploration of economic catalysts.