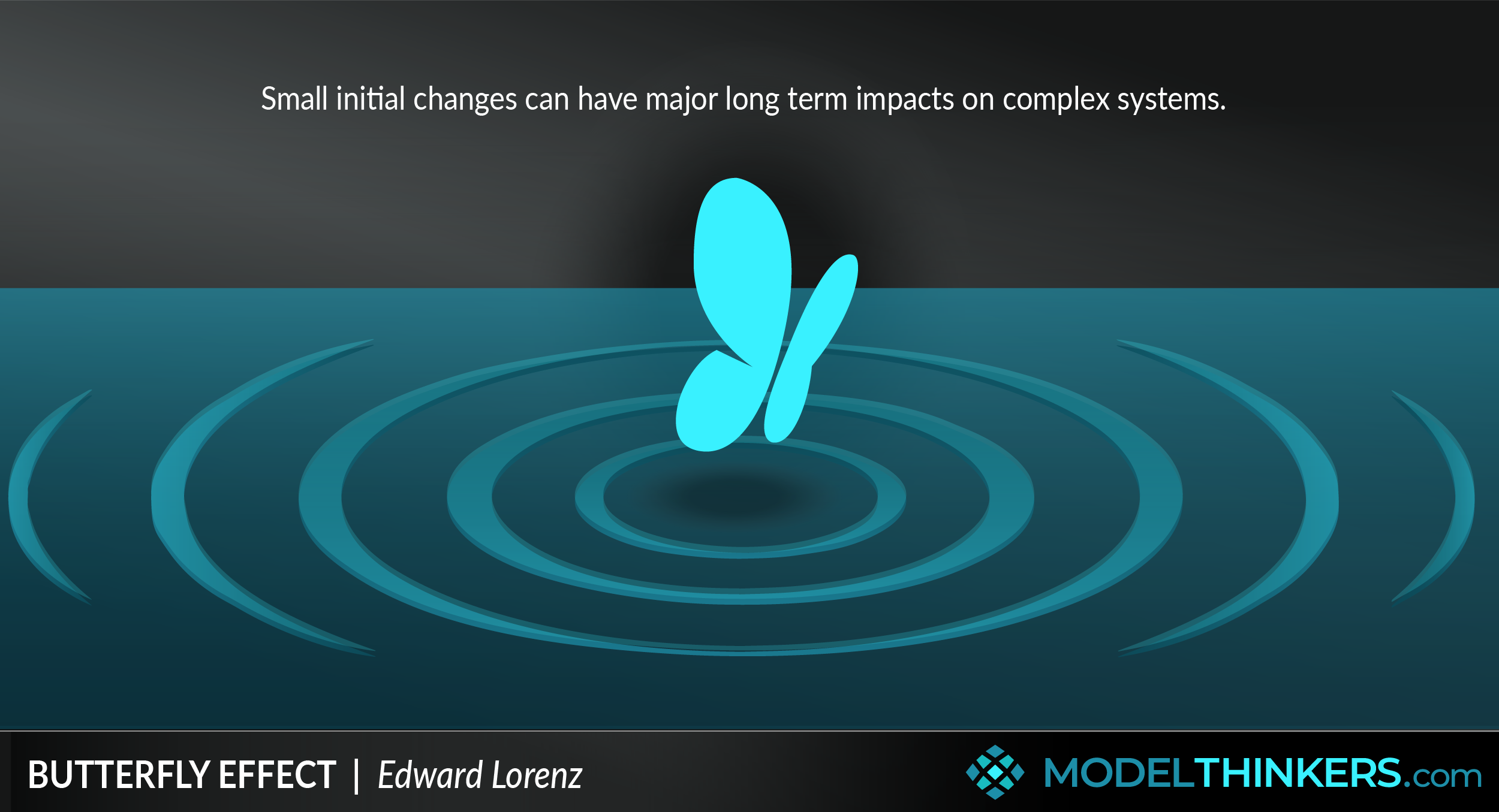 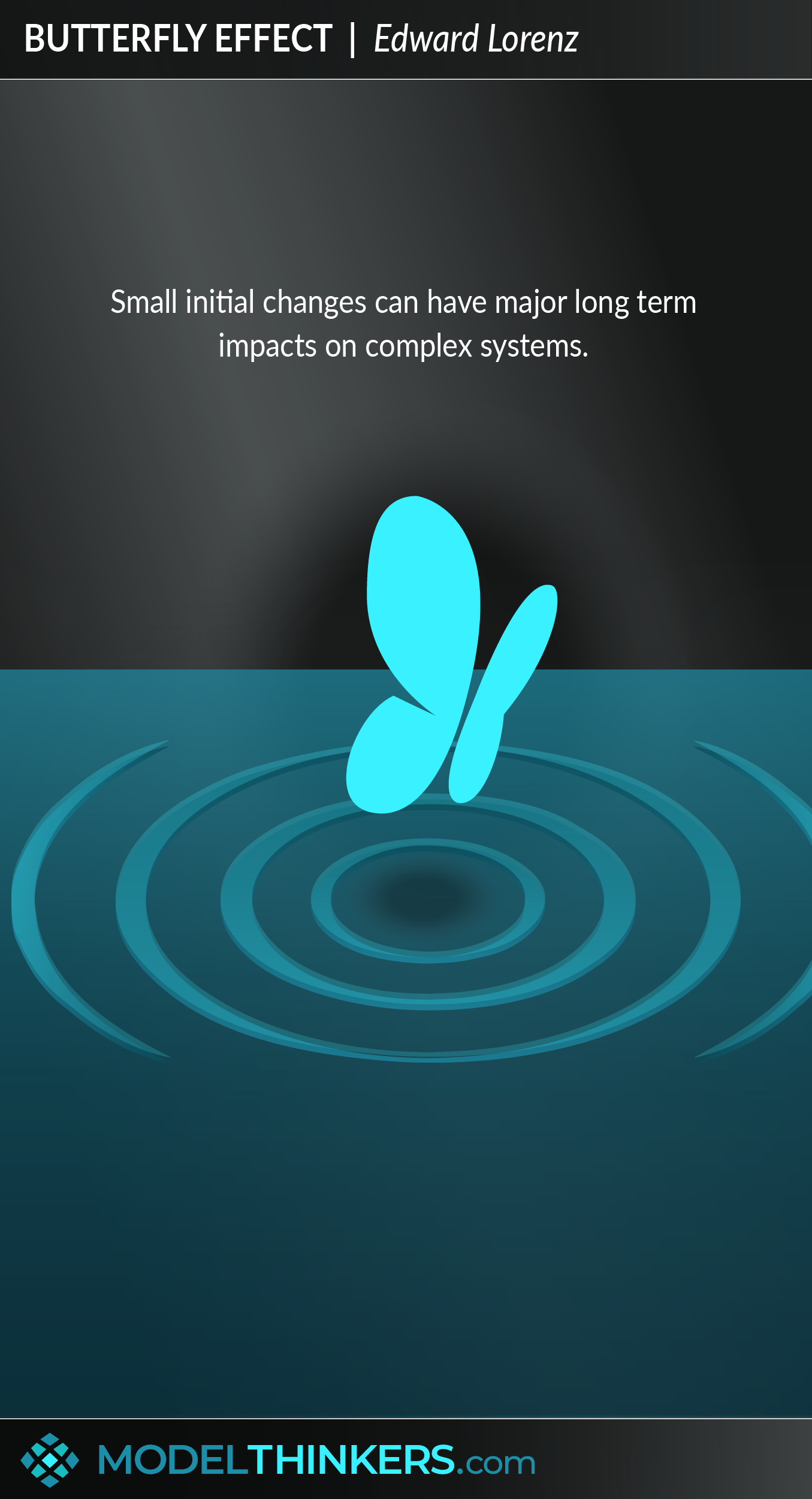 Just in case you were becoming too accustomed to the anxiety of living in a complex world, use this model to appreciate it's real volatility.

The Butterfly Effect indicates that small initial changes can have non-linear and major long term impacts on complex systems.

The Butterfly Effect is an underpinning of Chaos Theory, a branch of mathematics that examines inherently unpredictable and highly complex systems. Chaos theory argues that complex systems, such as the weather, seemingly chaotic and random but are in fact built on patterns.

The sensitivity of these patterns, and their nonlinear nature, means that a minor difference at the start of a process can make a major impact over time.

Thus we circle back to the butterfly effect, a metaphor where the seeming inconsequential flapping of butterfly wings (a small change), can impact a complex system such as the weather, with the ultimate result of a tornado in another part of the world.

The founder of the term, Edward Lorenz, in fact first applied the mental model to his work in computational modelling of weather patterns and the realisation that initial errors or changes were being exponentially amplified.

The butterfly effect shines a light on the complexity and unpredictable nature of our world. While there are patterns within the systems, the sensitivity of those systems makes initial ripples from small events create major, unpredictable implications.

Yes, this model can seem a bit academic — so please refer to the takeaways below and note the In Practice section for an example of how it played out on Twitter.

The butterfly effect is another reminder that, even within systems that have patterns and causal relationships, the complexity and sensitivity of such systems — whether it be our weather or a financial market — are ultimately prone to major impact from earlier seemingly insignificant factors. We can’t expect complex systems to roll out and deliver results in predictable ways, so we need the mindsets and mitigation plans to cope with a variation.

The butterfly effect outlines the exponential impact of early minor changes on system overtime. Those decisions in the early stages of a business, even small at the time, are likely to have unpredictable, amplified impacts later.

When engaging in complex systems, a valid business strategy involves making continuous small iterations with effective feedback loops to understand impacts over time. This can be as effective as looking for the ‘quick big fix’.

The Butterfly Effect tends to be misunderstood in popular culture. The idea of a butterfly flapping its wings and causing a typhoon is fascinating but has been interpreted as a linear explanation behind major events, rather than the intended emphasis towards complex and unpredictable patterns.

It should also not be interpreted as arguing that minor changes always have major impacts. Sometimes a butterfly will flap its wings and there will be no perceivable impact on a complex system. Sensitivity is in itself unpredictable.

Thus, one criticism of the Butterfly Effect might be the ‘so what?’ If we embrace the unpredictability that it argues, what can we do with that, how do we plan, how do we trust any other model, theory or prediction? However, a more balanced view would see it as a grounding warning.

Twitter founder and CEO Jack Dorsey has discussed the impact of early decisions on Twitter. In a podcast interview, Dorsey explained he would have hired “a game theorist to just really understand the ramifications of tiny decisions that we make, such as what happens with retweet versus retweet with comment and what happens when you put a count next to a like button?”

He attributes that early decision and it’s implicit rewarding of liked and shared content over other metrics such as diversity, accuracy or relevance, with the ‘clickbait’ and sensationalist culture found in some parts of Twitter.

His plan for the future embraces this unpredictability — advocating a considered and iterative approach that embraces the scientific method to continually improve the product and experience.

The butterfly effect points to uncertainty and unpredictable complex systems.

Use the following examples of connected and complementary models to weave butterfly effect and chaos theory into your broader latticework of mental models. Alternatively, discover your own connections by exploring the category list above.

The Butterfly Effect concept was coined by American mathematician and meteorologist Edward Lorenz who imagined the metaphor of a tornado being determined by perturbations as minor as the flapping of the wings of a butterfly weeks earlier.

The idea of small actions having large effects had been described before by many mathematicians and philosophers, with the most famous probably being that of Johann Gottlieb Fichte who said in his 1800 work The Vocation of Man that "you could not remove a single grain of sand from its place without thereby ... changing something throughout all parts of the immeasurable whole".