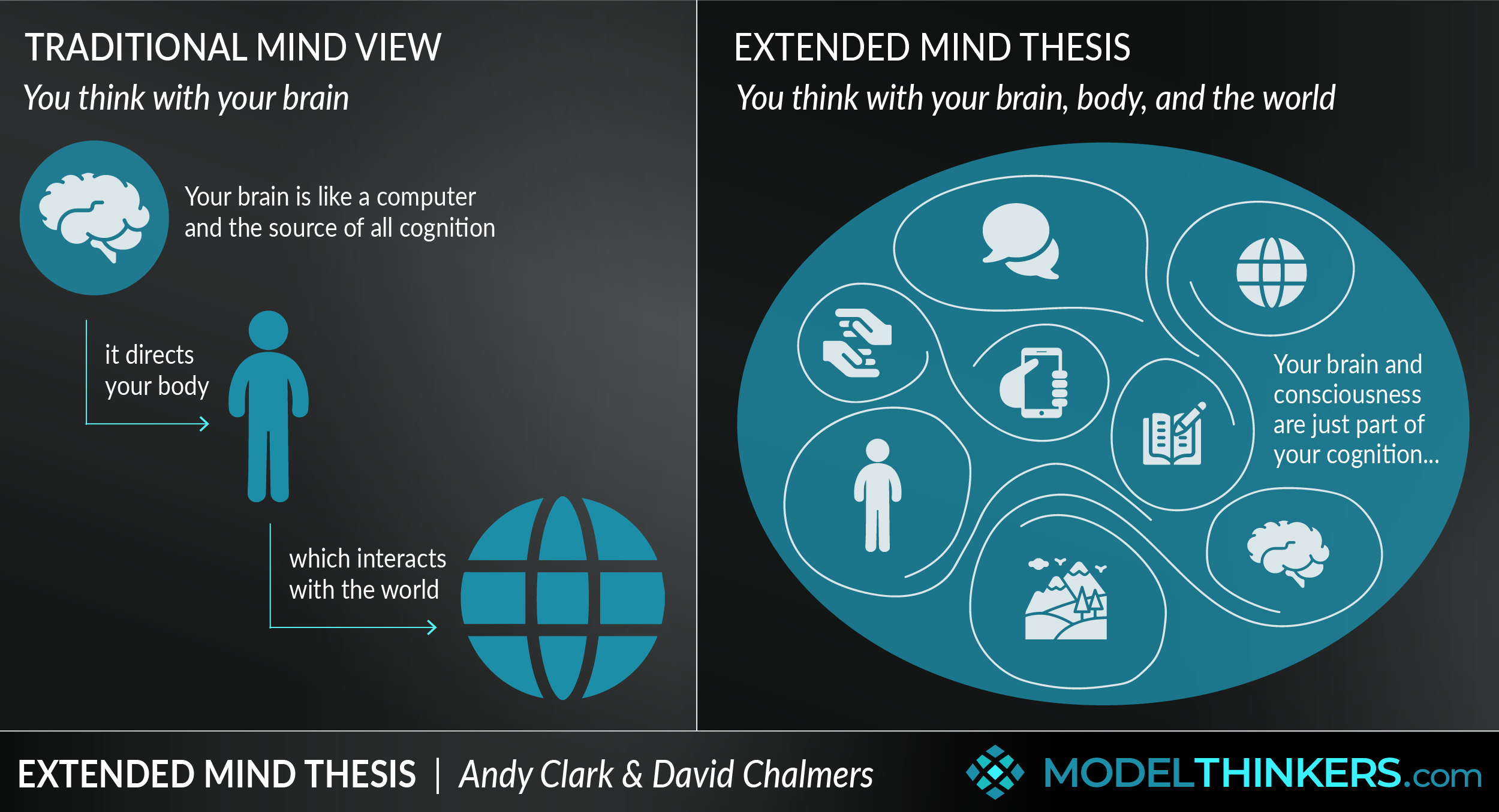 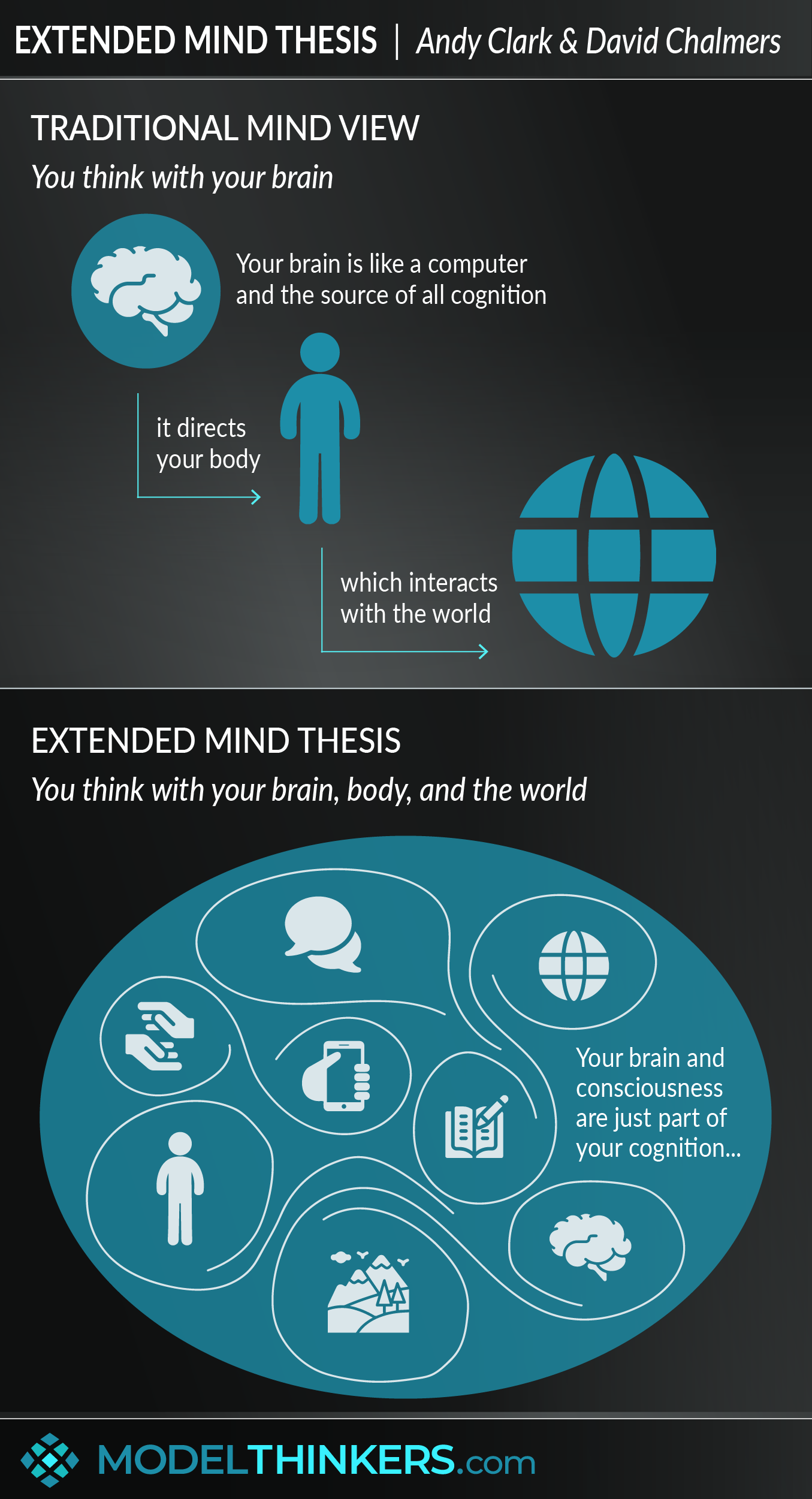 “Where does the mind stop and the rest of the world begin?” That was the question philosopher Andy Clark and cognitive scientist David Chalmers asked at the beginning of their 1998 paper, ‘The Extended Mind’. And it was answering that question that led to this concept.

The Extended Mind Thesis argues that your mind — your ability to perceive, remember, and think — extends far beyond your brain and the conscious ‘voice in your head’. Instead, it posits that your mind is inextricably woven into your body and the world, including the environments and people around you.

We’d say that was ‘mind-blowing’ but that would just confuse the matter further, so let’s take this a step at a time before we get into the many practical implications of the thesis.

YOU THINK WITH YOUR BODY.

A good starting point is the notion of embodied cognition or the theory that cognition is shaped by and integrated with the body. There are countless manifestations of this including:

Making the shift of perspective from ‘brain-centric thinking’ to ‘you think with your body’ involves exploding the dominant metaphor of seeing brains as computers. Rather than simply processing external information then instructing our body to act, the Extended Mind Thesis points to evidence that brains and bodies work in a complex, dynamic and inextricably linked partnership to perceive, think and decide.

YOU THINK WITH THE WORLD.

Once you accept the embodied cognition theory and that you think with your body, it’s only a short and logical trip to embrace extended cognition and accept that you think with the world. Imagine arriving at the shops and struggling to remember the four things you need. If you managed to recall those items from your memory you’d attribute that to your own thinking process. So what’s the difference between recalling that information from memory versus a list in your pocket?

Perhaps an even more transparent case of distributed minds comes from people with Alzheimer's. One of the inspirations for this thesis came from an occupational therapist colleague of Clark who pointed out that her most highly functional Alzheimer patients ‘augmented’ themselves and distributed their thinking across their homes with post-it notes, checklists, and reminders across relevant rooms that allowed them to remember, think and take effective action. Clark points out that, from a perspective of the Extended Mind Thesis, interfering with such houses should raise the same ethical issues as interfering with someone’s brain.

There are many other examples of ‘thinking with the world’, from using a GPS; the way you’ll likely work out an idea by sketching or writing it out; or how you might use a journal or diary to reflect and learn. Interactions with other people are also crucial elements of your environment and cognitive process and the process of conversations have a cognitive element of processing and seeking clarity. In each situation, thinking doesn’t radiate from your brain or even brain/body in a one-way process into the world, instead, it meshes and loops with both your body and the environment.

Clark describes the process of cognition with these entangled elements as being fundamentally ‘loopy’ and that the ‘loops matter’ as they provide the opportunity for greater understanding and more effective thinking. So, if there was a call to action around this philosophy, we’d argue that it’s to build more effective loops and value the process of using them to greater effect.

This might include taking the time to sense more into your body as part of your conscious cognitive process, particularly for areas where you have experience and your ‘gut’ feeling will likely be helpful as a result. It’s also providing opportunities to be more physical as part of your thinking including going for walks, standing up and so on. Beyond your body, consider how you interact with the environment. What ecosystems, tools and people are you exposing yourself to, and ‘looping in’ to your cognitive process? See the Actionable Takeaways below for more.

The Extended Mind Thesis can begin to explain the effectiveness of the Method of Loci, which leverages our relatively developed spatial thinking as a memory hack. The ‘thinking with your body’ element of the thesis adds another dimension to our understanding of Focused and Diffuse Thinking, taking diffuse thought beyond simply a subconscious brain-based process to something that is impacted upon by our entire body. Our ‘loopy’ takeaway from the thesis has much resonance with the OODA Loop, and cycling through understanding in an environment, and with the Extended Mind Thesis, we might add an element of ‘checking in with one’s body’ in the Orientation phase. Finally, this thesis adds additional weight to learning methods such as the Feynman Technique which uses communication as part of learning and understanding.

Stop pretending that your consciousness, or that ‘voice in your head’, is the only player when it comes to thinking. Take the time to pay attention to your body, feel into the signals it's sending and consider ‘listening to your gut’, especially if it’s in a situation you have some experience with and where you might have embodied understanding of.

If you accept that you think with your body, then improve your chance for success by being physical, walking or doing any form of movement, when you need to think. It is both ironic and unfortunate that we typically sit stationary at a desk when we are expected to do our most effective work.

Identify the sort of environment that will support your thinking process and stop assuming that you will be oblivious to the environment that you’re trying to work or think in. Experiment with exposing yourself to natural settings, creative settings, and so on.

Don’t just use notes or documents ‘to get ideas out of your head’, use them to clarify and develop your thinking. Go further by looking at the technological ecosystem that you’re using to augment yourself. Your phone, the apps you’re using, the way you’ve set up your systems — they can all contribute more to your cognitive process.

This thesis is another reminder of the power of collaboration and even co-design in developing ideas beyond the ability of an individual. Accepting the thesis means getting serious about how you can include more and the right people in your ‘cognitive loops’. It also echoes Jim Rohn’s famous observation that “We are the average of the five people we spend the most time with.”

One of Clark’s drivers behind the Extended Mind Thesis remains the ethical implications. Of course, the thought of cutting into someone’s brain would be abhorred and rejected by society. So, given that a high functioning Althzheimer patient can be viewed as ‘distributing their cognition’ over their house, Clark argues that impacting the house or removing that person from it must be considered with a similar ethical lens.

Explore More
Extended Mind Thesis is featured in these playbooks:

Another criticism of the thesis is that external objects such as a shopping list are independent objects separated from the ‘thinker’. In 2010 some academics asked ‘why did the pencil think that 2 + 2 = 4?’, making the point that pencils had no cognition in and of themselves. Clark responded, supporting this observation in a way, answering ‘because it was coupled to the mathematician.’ Thus Clark argues that it is that coupling or link that generates the cognition process.

Viewing the more obviously distributed cognition of an octopus can help to shift our own self-perception of how we think. This Atlantic article points out that an octopus “has a bizarre and miraculous mind, sometimes inside its brain, sometimes extending beyond it in sucker-tipped trails. Neurons are spread throughout its body; the creature has more of them in its arms than in its brain itself. It’s possible that each arm might be, to some extent, an independently thinking creature, all of which are collapsed into an octopean superconsciousness in times of danger.”

Otta and Inga are a story presented by Clark and Chalmers in their original paper to demonstrate the Extended Mind Thesis.

“Inga hears from a friend that there is an exhibition at the Museum of Modern Art, and decides to go see it. She thinks for a moment and recalls that the museum is on 53rd Street, so she walks to 53rd Street and goes into the museum. It seems clear that Inga believes that the museum is on 53rd Street and that she believed this even before she consulted her memory. It was not previously an occurrent belief, but then neither are most of our beliefs. The belief was sitting somewhere in memory, waiting to be accessed.

“Now consider Otto. Otto suffers from Alzheimer's disease, and like many Alzheimer's patients, he relies on information in the environment to help structure his life. Otto carries a notebook around with him everywhere he goes. When he learns new information, he writes it down. When he needs some old information, he looks it up. For Otto, his notebook plays the role usually played by a biological memory. Today, Otto hears about the exhibition at the Museum of Modern Art, and decides to go see it. He consults the notebook, which says that the museum is on 53rd Street, so he walks to 53rd Street and goes into the museum.

Andy Clark and David Chalmers paper The Extended Mind was published in 1998. Clark went on to publish his books Supersizing the Mind in 2008 and Surfing Uncertainty in 2015. Clark is currently a board member of mindware company Cyborg Nest and is collaborating with Google to explore the human-machine ecosystems and interactions. After a stint at the Center for Consciousness at Australia’s ANU, Chalmers took on a Professorship position at the philosophy department of New York University part-time in 2009, and full time in 2014.

While already influential in certain circles since the 1988 publication, the Extended Mind Thesis has been further popularised by Annie Murphy Paul’s quite accessible 2021 book entitled The Extended Brain: The Power of Thinking outside the Brain.