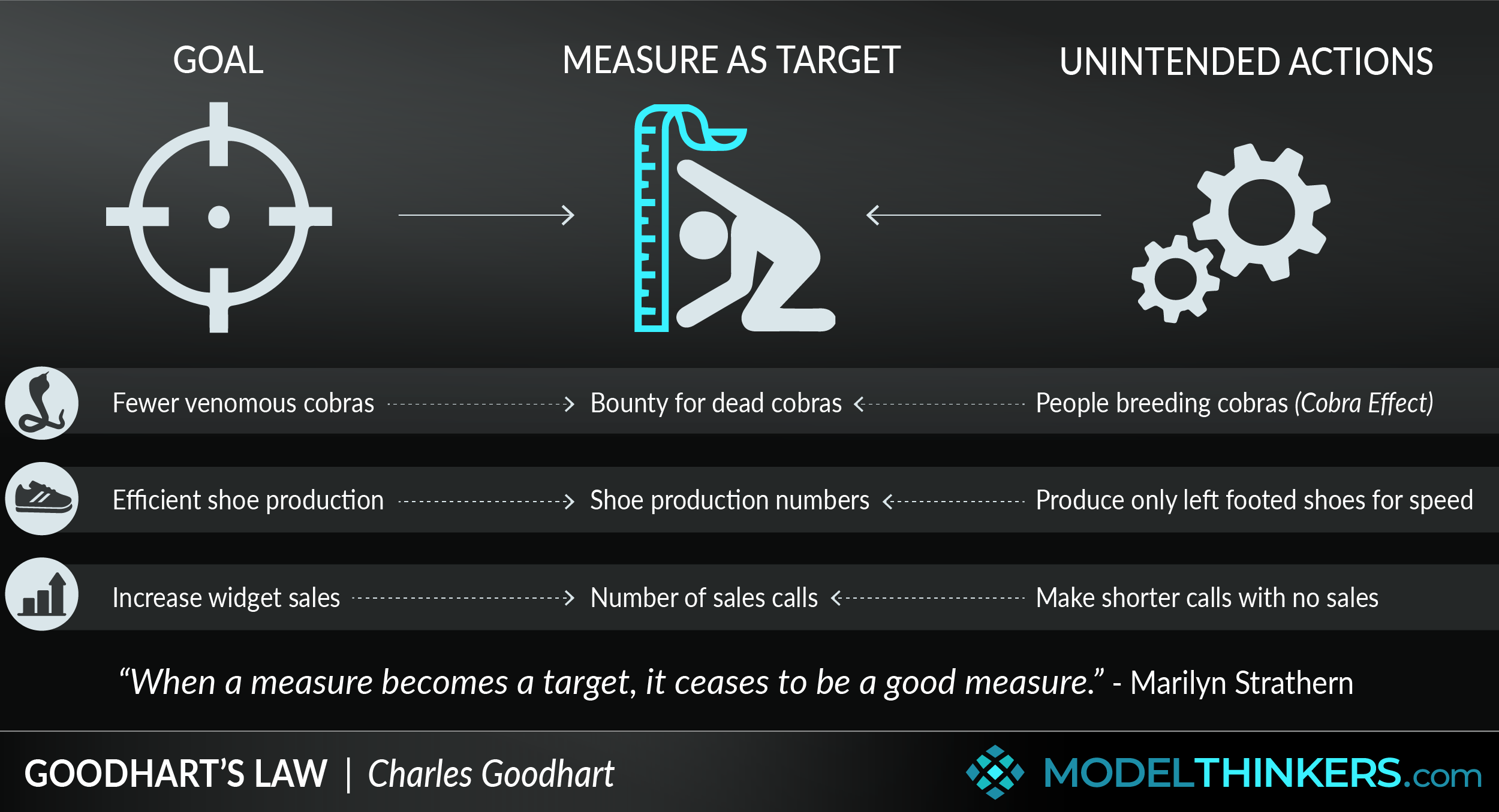 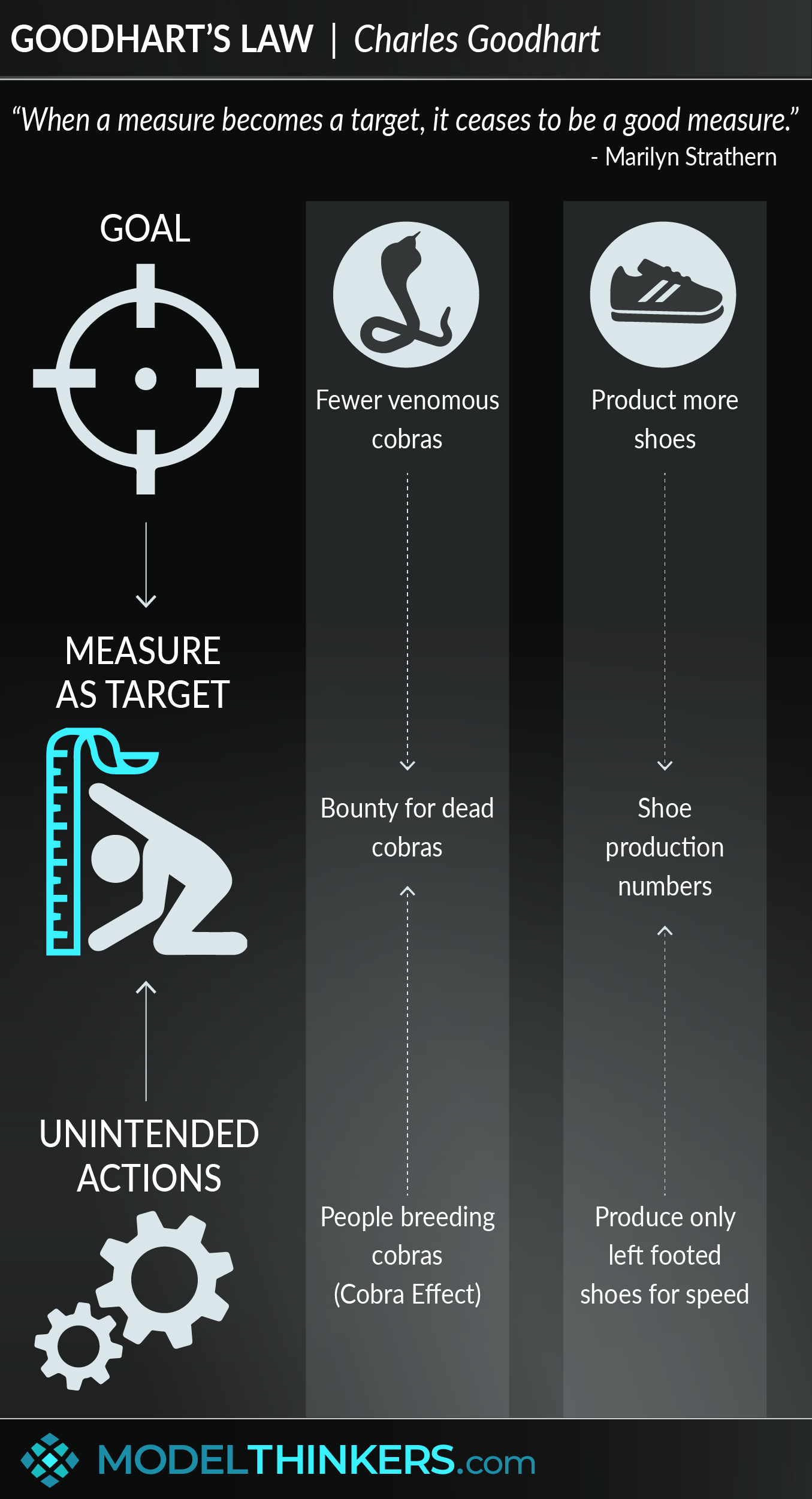 One of Peter Drucker’s most known quotes is “If you can’t measure it, you can’t improve it.” It’s hard to deny that measurement and gathering data are critical factors to success, which is why Goodhart’s Law can be a harsh reality check.

In the words of anthropologist Marilyn Strathern, Goodhart’s Law tells us that ‘when a measure becomes a target, it ceases to be a good measure.’

Goodhart’s Law can be seen anywhere where people want to measure progress to reach a goal, for example:

In a speech in 1975, Charles Goodhart jokingly coined Goodhart’s Law explaining “Any observed statistical regularity will tend to collapse once pressure is placed upon it for control purposes.” This concept was popularised and simplified by Keith Hoskins and Strathern (see Origins below for more).

In addition, Campbell’s Law represents an added perspective on the Adversarial approach in particular, by pointing out that the more a measure becomes valued, the more pressure there is to cheat or corrupt the data to deliver it. For example, Campbell explained “Achievement tests may well be valuable indicators of general school achievement under conditions of normal teaching aimed at general competence. But when test scores become the goal of the teaching process, they both lose their value as indicators of educational status and distort the educational process in undesirable ways.”

Goodhart’s Law highlights challenges with measuring anything as a proxy for a goal, but it should not be mistaken for dismissing all attempts at measurements. Goodhart himself was not against statistical analysis, his criticism of the Thatcher government was that such statistics were defining monetary policy. So, before you give up on measuring, here are some techniques you might want to consider:

We’ve already discussed how you might combine Inversion and Second Order Thinking to consider the negative impacts of a seemingly useful measure. The Balanced Scorecard is one way of viewing a broader number of measures to consider business health. In addition, it might be worth considering Systems versus Goals to move away from goals and proxy metrics altogether or at least explore additional forms of Feeback Loops beyond traditional metrics.

Goodhart’s Law is a reminder that measures that become targets will distort behaviours in generally undesirable ways as people attempt to game the system. It doesn’t mean you should never set measures, but it is a warning to consider the downstream implications.

Rather than being focused on a single metric, consider using multiple measures that better represent your goal, and try to move those metrics as authentically close to your actual goal as possible.

Goodhart’s Law essentially points out the limitations of measures that are substituted for goals, so it is difficult to critique. Perhaps the best limitation in relation to Goodhart’s Law is the suggestion that you should give up on measures as a result of it. Instead, this ‘law’ presents a strong reminder to decouple rewards with your chosen metrics and to continually challenge the measures you are using to ensure that they do not drive undesirable behaviours.

Given McDonald’s global coverage and the basic indicator of food pricing linked to inflation, for a time the Big Mac Index was used to test the level of a country’s inflation. This simple index was, as it sounds, literally charting the price of a Big Mac to chart the level of inflation. Though in the grips of rising inflation in the early 2000s, the Argentinian government persuaded Mcdonald's to keep Big Mac prices low so they could game the system.

This HBR article describes challenges with the broadly accepted NPS measurement in assessing customer satisfaction. It explains research that demonstrated that customers might be both detractors or advocates of a brand depending on context or product lines. Twitter was the best example of this, with many consumers having a ‘love-hate’ relationship with the platform that could not be captured by a single NPS score.

Others have noted that NPS scores can be shifted by brands desperate for better ratings simply by framing the question differently, e.g. verbally mentioning to a customer that ‘a score of 8 or above indicates that you’ve been satisfied by my service’.

Goodhart’s Law is named after British economist Charles Goodhart who, in 1975, jokingly coined the term, stating that “Any observed statistical regularity will tend to collapse once pressure is placed upon it for control purposes.” His original formulation was part of his critique against the Thatcher government, which he argued was implementing monetary policy based on narrow statistical targets.

Our modern understanding of the law can be attributed to Keith Hoskins who, in 1996, wrote: “'Goodhart's Law' – That every measure which becomes a target becomes a bad measure – is inexorable, if ruefully, becoming recognized as one of the overriding laws of our times.” Anthropologist Marilyn Strathern responded to Hoskin’s paper in 1997 and captured the law in the popular phrasing it is most commonly known today.

Our overview references the work of Manheim and Garrabrant’s Categorizing Variants of Goodhart’s Law which can be seen here. A summary of the paper can be found on Garrabrant’s blog post here.