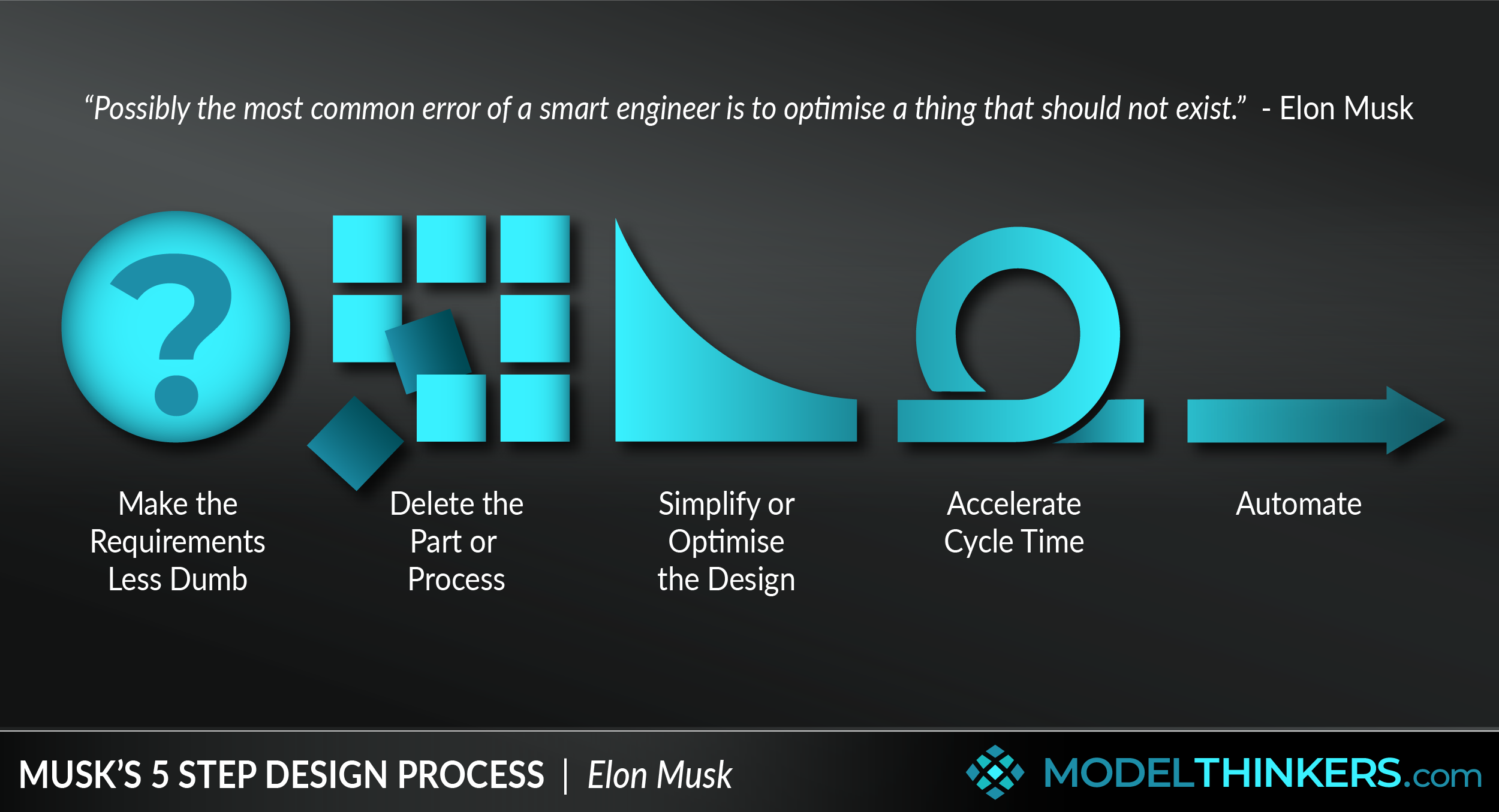 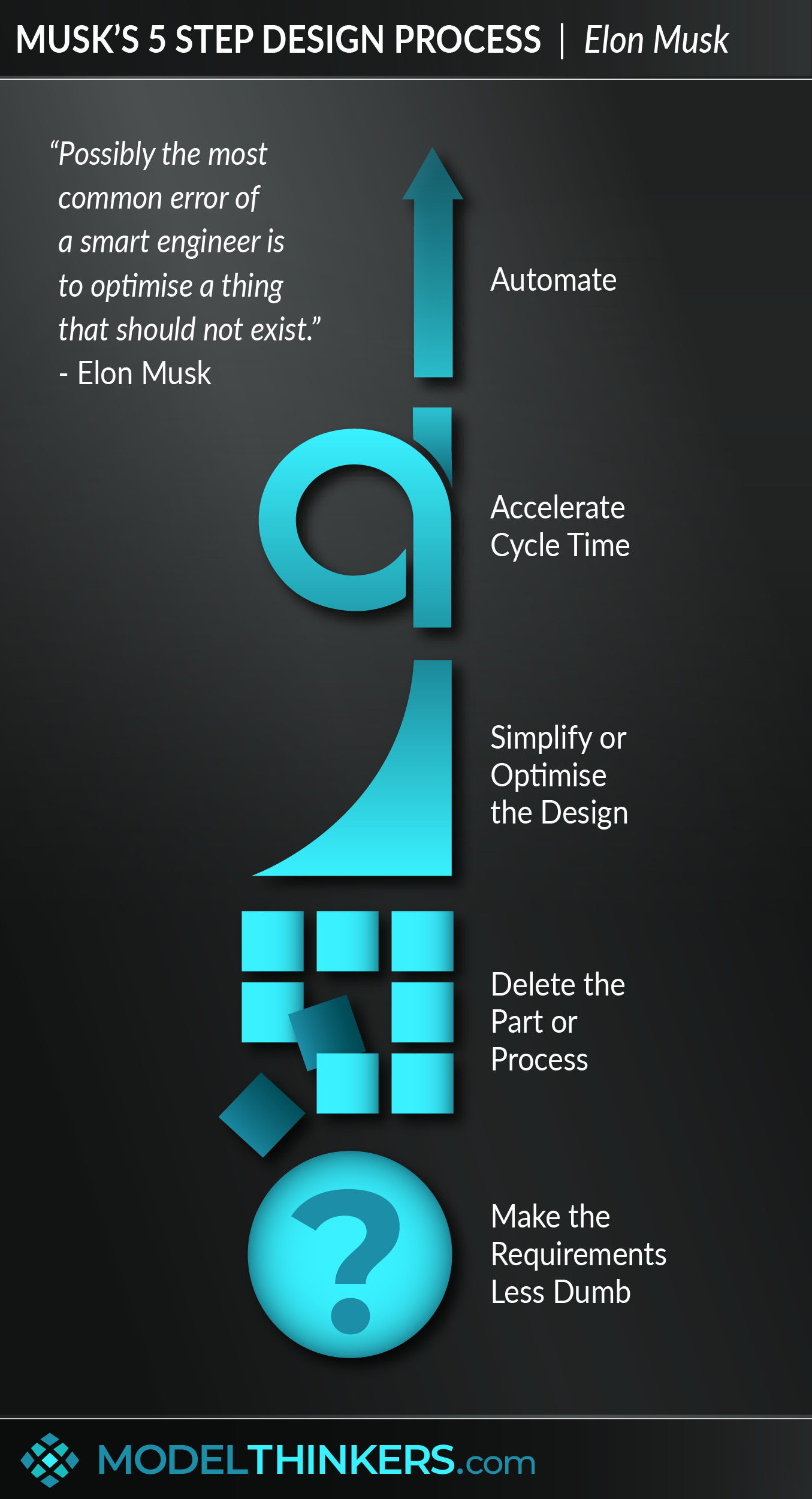 How do you design, build and launch a rocket into space in a radically different way from past attempts? That’s the question that faced Elon Musk’s SpaceX, and he recently revealed the process he has embedded into the organisation to make it possible.

This model was revealed by Musk in an interview after he was asked whether the grid fins of his latest rocket design fold in (see the Origins below for the full interview with Everyday Astronaut).

Musk explained that they didn’t, but then expanded by outlining the 5 step process SpaceX was aiming to “apply rigorously”, and which led to the grid fin decision. See the Origins tab below for the original video interview and view the following points for each step in more detail:

Musk notes that “your requirements are definitely dumb, it does not matter who gave them to you.” Similar to Framestorming and its reminder to ‘question the question’, Musk uses this step to test assumptions, pointing out that requirements from a ‘smart person’ are often the most dangerous since you might not question them enough.

“If you’re not adding things back in at least 10% of the time, you’re clearly not deleting enough.” Musk suggests starting lean and building up when and if required, but warns that the bias will be to add things ‘in case’, “but you can make ‘in case’ arguments for so many things.” He goes further, arguing that each requirement or constraint must be accountable to a person, not a department, because you can ask that person about its relevance and purpose, rather than having a requirement that nobody owns and persists for years despite being redundant.

“Possibly the most common error of a smart engineer is to optimise a thing that should not exist,” Musk explains, emphasising the importance of working through the first two steps before trying to optimise. To do this effectively, Musk argues that each engineer needs to take a holistic view of the project, pointing to previous mistakes where engineers had invested enormous resources into reducing the weight of the rocket’s engine but hadn’t adequately addressed the equivalent problem of reducing payload weight.

Musk embraces the drive to go faster but warns against pointing your efforts in the wrong direction, saying “if you’re digging your grave, don’t dig faster.” He seems to recommend an accelerated Agile approach, but only after the first three steps of his process are satisfied to ensure that you’re moving faster in the right direction.

Musk warns against automating before the earlier points are addressed. He relates the story of streamlining a robotic process to build battery mats in the Tesla Model 3. He describes investing massive time and effort to automate and streamline that problematic process before he finally asked what the mat was for. He discovered that it had been created to reduce sound but was no longer required.

Musk’s design process stems from an engineering perspective to streamline and rethink rocket design but can be applied to almost any design project from UX, a marketing campaign, or product design more broadly.

Elements of Musk's process reflect his championing of First Principle Thinking, and consistently challenging assumptions. We’ve already identified links with Framestorming, and the idea of questioning the question, and his approach is also reminiscent of Occam’s Razor.

The rejection of including more and more features ‘in case’ counters the Redundancy/ Margin of Error model, and Musk’s approach of building ‘good enough’ is very aligned to Lean Startup and Minimum Viable Product, in fact he refers to a ‘Minimum Viable Rocket’ in the interview.

Similar to Framestorming, the first step of this process involves challenging and questioning the requirements, no matter who gave them to you.

Next, try to start from the core and add when required. Resist the urge to add things ‘just in case’.

Now you’re answering the right question and have stripped it to the core you can begin to optimise what you have.

Again, knowing you’re moving in the right direction, its time to iterate faster.

As a high-level approach, there’s not too much to disagree with when it comes to this approach. The challenge will come in the application.

Musk describes it as a linear process, starting with the first three stages to ensure you’re addressing the right question. We imagine there will be many applications of complex design where you will also need to cycle back and forth through the process as new requirements are uncovered or old ones are refined.

This approach from Musk seems to be something that he’s explored and applied for some time, noting several mistakes from both Tesla and SpaceX and how he is trying to ‘rigorously apply it’ in the work he’s currently leading with SpaceX.

As mentioned, Musk revealed this process as something he was trying to rigorously apply at SpaceX when he was asked whether grid fins on the rocket folded back.

Grid fins are massive bear trap looking devices that traditionally fold back after launch, but SpaceX simulations discovered that not folding them back would have minimal impact and could be accounted for by other means, thus they deleted the need for huge mechanisms to move them. While the process helped change the approach to grid fins, it’s clear that Musk is aiming to apply it more broadly, see the full interview with Everyday Astronaut below.