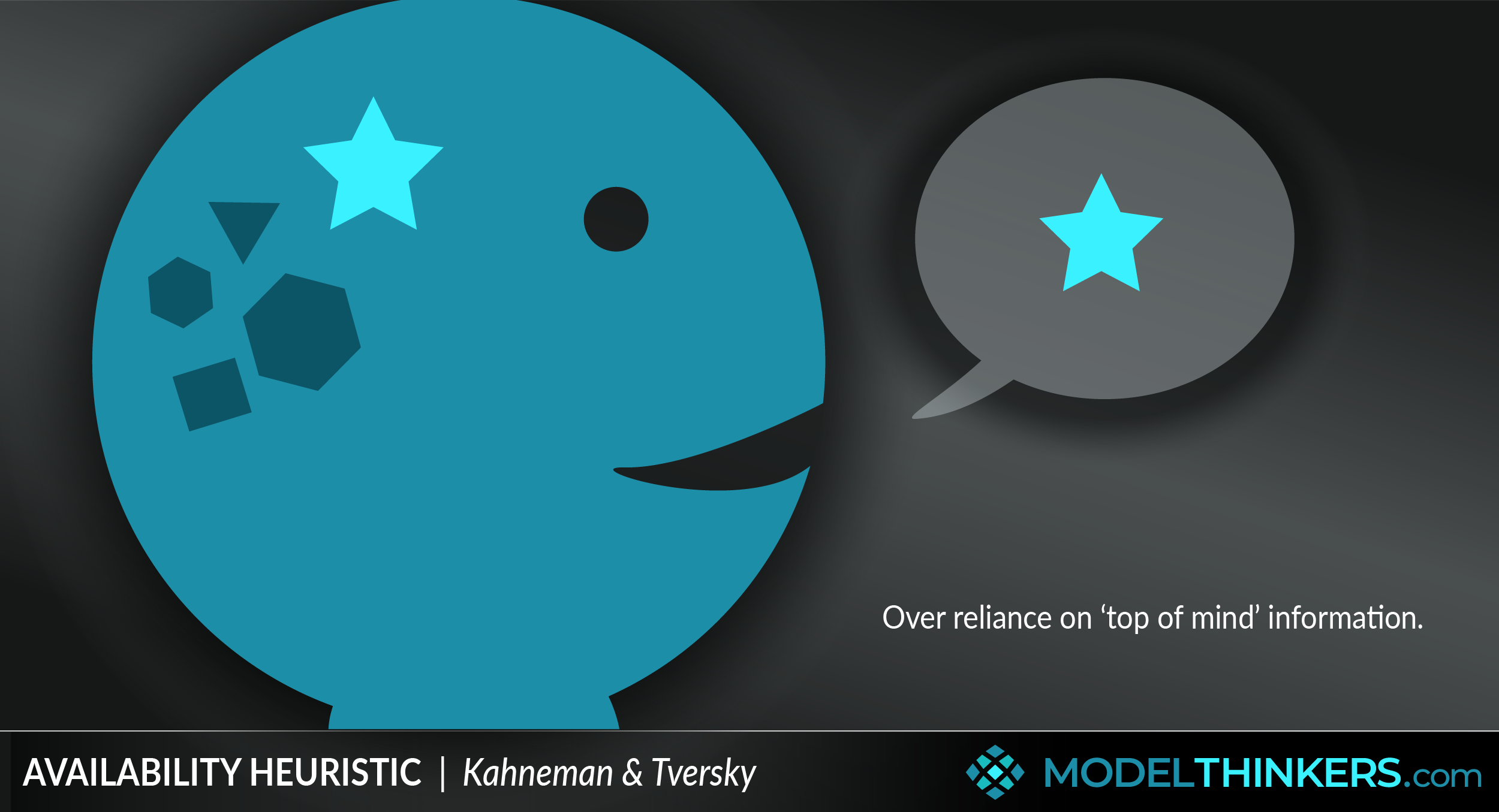 This mental model is a reminder that you will tend to mistake 'easy' or 'there' with 'true.'

The Availability Heuristic is a mental shortcut that leads you to overly rely on ‘top of mind’ and easily available information, generally because it’s recent, frequent or stands out for some other reason.

Like any heuristic it can be useful on occasion but can also be viewed as a bias that leads to impressionistic thinking rather than considered decisions based on factual information and/or data.

The Availability Heuristic has implications for multiple domains. It explains your behaviours and opinions as influenced by repeated or shocking mass media messaging or marketing; it impacts your tendency to judge investment options; and even informs how you judge recent events from movies to job interviews.

Daniel Kahneman explained a more insidious use of this heuristic: “A reliable way to make people believe in falsehoods is frequent repetition, because familiarity is not easily distinguished from truth. Authoritarian institutions and marketers have always known this fact.”

The Availability Heuristic is a common bias and can be considered in the context of cognitive psychology and behavioural economics. It has major implications for decision making in all domains.

As a heuristic, it is worth relating this model to Fast and Slow Thinking. It also connects with the Anchoring Heuristic and Framing.

Rare and dramatic events stand out and the easiness with which we recall them makes us think events such as police shootings and car accidents happen often. Identify such sensational events as easily available to our memory while potentially rare in actuality. Instead, consider the banal everyday facts that could affect your activity even more.

If you only watch medical adverts, you might be inclined to think that you’re sick. Whether you are critical of it or not, be aware that the media and images you consume impacts on your memory and impressions. Consider what you’re putting into your mind as a result.

Avoid quick judgements for important decisions. Rather than relying on unreliable impressions which will be influenced by the availability heuristic, pause, reflect and use systematic research and data analysis to inform your choice.

A study of experts versus novices indicated that ease of recall and associated availability heuristic was a greater issue for novices. That said, studies of doctors and other professionals have also demonstrated that expertise does not provide total protection against such bias.

Organise a process to challenge assumptions and thinking behind key decisions. This might involve data checks, investigation, or even the use of red-teaming or a devil’s advocate to challenge initial ideas and force the consideration of alternatives.

In communications, marketing, behaviour change or politics — consider how to use vivid narratives, surprising presentation of facts, recent or frequent messaging to make key ideas easily recallable in others and influence their decision making.

Explore More
Availability Heuristic is featured in these Playbooks:

More women or men - depends on fame over numbers

For example, for list 1, subjects remembered the more famous female names and that availability heuristic incorrectly led them to believe that there were more women on the list than men.

Another study asked participants whether asthma or stroke was more likely to cause death. The main determinant in participants' choice was whether they knew of someone that died of one of the diseases.

Answer this. What is the least likely cause of death of these three options: plane crashes; bathtubs; or being hit by lightning.

Of those three, dying of a plane crash is least likely, yet because plane crashes are heavily covered by the media with memorable and disturbing images, they tend to be easier to recall. The Availability Heuristic would therefore lead most people to overestimate the chances of such death, despite the actual data.

The main critique of debate related to the Availability Heuristic tends to relate to how memories become easy to recall. This has overlap with memory theory and retention, though does not tend to invalidate the general point that you use information that is fast and easy to retrieve to unduly inform decisions.

The availability heuristic is a common bias and can be considered in the context of cognitive psychology and behavioural economics. It has major implications for decision making in all domains.

Use the following examples of connected and complementary models to weave availability heuristic into your broader latticework of mental models. Alternatively, discover your own connections by exploring the category list above.

The availability heuristic was first studied by psychologists Amos Tversky and Daniel Kahneman, who determined that people use readily available facts when judging a situation instead of behaving as rational actors  (which had been the predominant view before their work) – they labelled the newly-discovered phenomenon as “availability heuristic” in 1973.