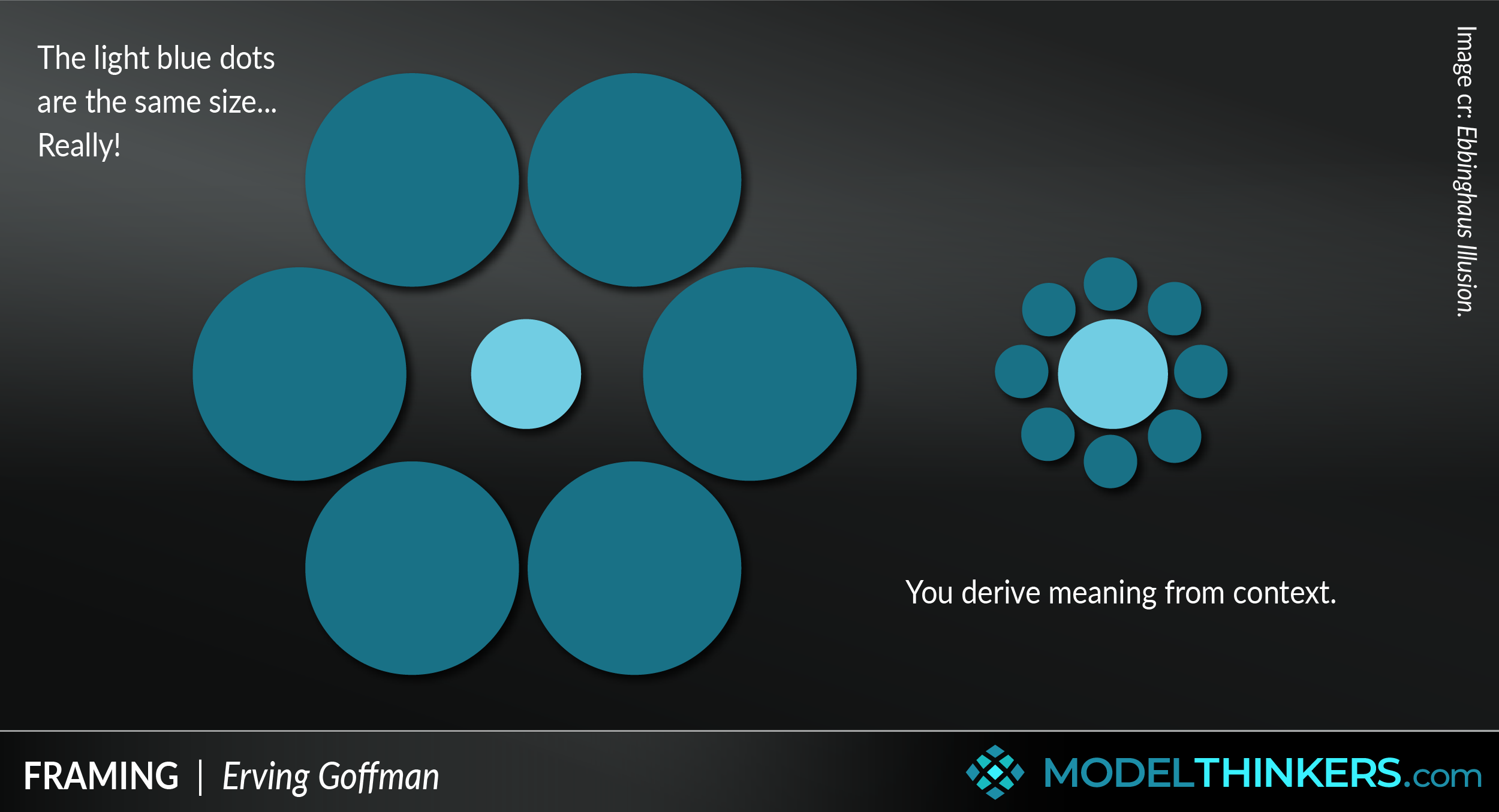 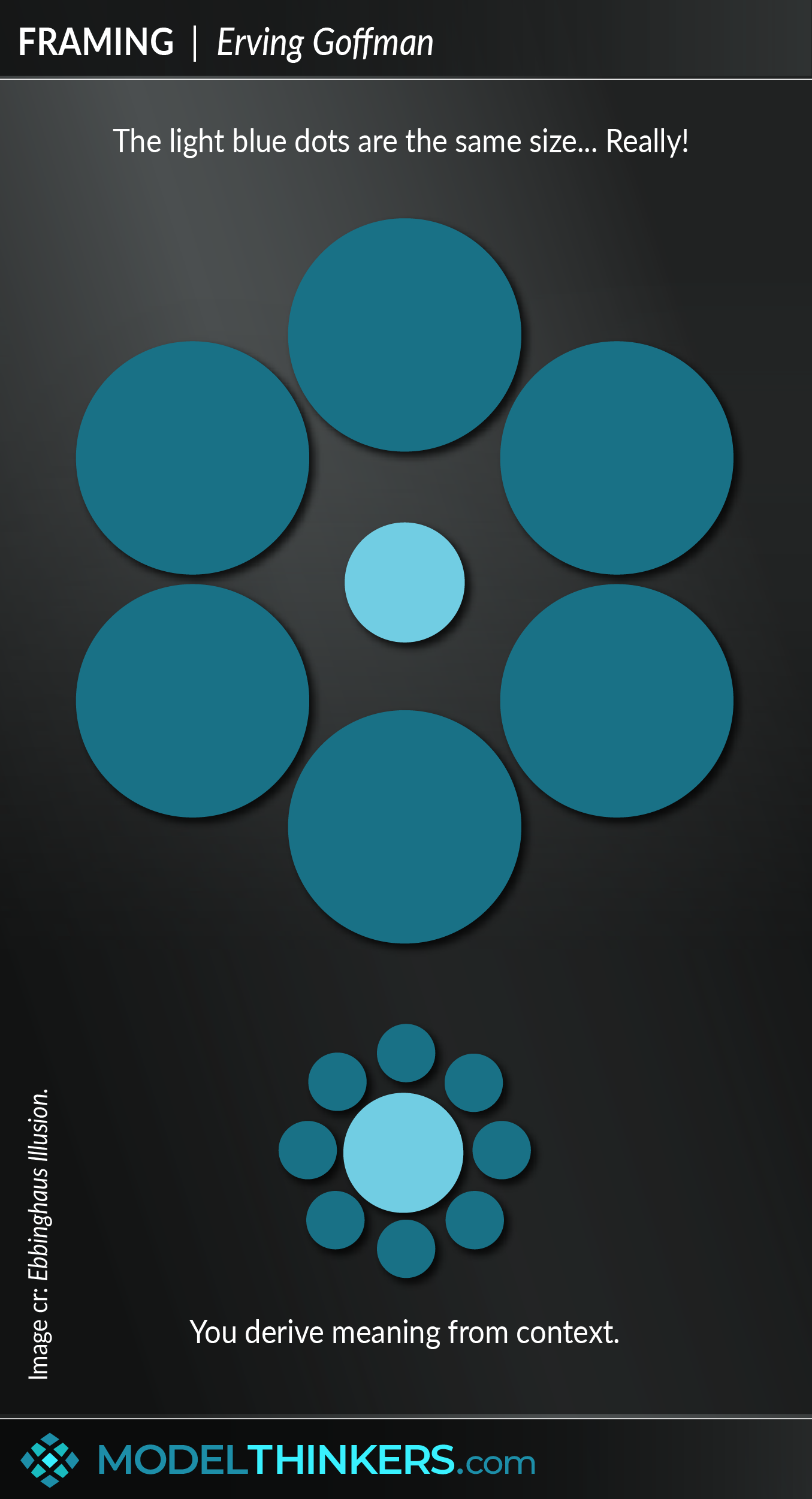 This model explains why you'll buy 80% lean meat but walk past 20% fat beef; how you can present the same facts differently to better influence people; and why one of those damn dots in the image above looks bigger than the other one, even when you know they're identical.

Framing explains how people process and judge information based on the context, or frame, it's presented through. It highlights how we derive meaning from context.

Framing is based on the idea that any issue can be viewed from a variety of perspectives. Such views or frames are essentially the  Mental Models we use to understand and act in a situation, born from our personal beliefs, experience, and context, but also by the way information is presented to us. In that sense, there are both prior personal frames that we use to interpret information and frames used to communicate information to us. See Limitations below for more on the interplay between the two.

WHY YOU SHOULD CARE?

Having a more conscious and deliberate approach to Framing is crucial for three reasons:

So you're sold on having a deliberate approach to Framing but not sure where to start? There are a number of academic taxonomies about Framing, but we didn’t find them particularly practical. Instead, we created our own list of ten Framing prompts to help you better identify, challenge, and use this model.

This model is closely linked to an understanding of Mental Models which are the substance of your frames. As such, it is also very relevant to the Map vs Territory.

Framing explains the politics of the Overton Window, feeds into Cialdini’s Six Principles of Persuasion and is fundamentally linked to Kahneman’s work around Fast and Slow Thinking and Behavioural Economics. Of all cognitive biases, Framing has most in common with the Anchoring Heuristic, though it is broader in its... well... framing ;).

Combine Framing with your understanding of the Confirmation Heuristic to appreciate how frames can become compelling once established; and Loss Aversion and Hyperbolic Discounting when designing effective frames. Finally, in terms of reframing — be sure to explore practical techniques with Framestorming.

Be aware that messages and information are framed, and that the context presented will have a huge impact on the way you think and act. Challenge Framing by considering other comparisons, contexts, and even language around the information. A simple way to do this is to seek out sources that have different points of view and agendas.

View the summary above for ideas on using visual, metaphorical, values, and other forms of Framing. Don't just communicate information, be aware of the context you are creating around it and the comparisons/ reference points your audience will rely on to make a judgement.

Explore Framestorming to help you reframe as habit. Ask yourself 'how might I reframe this?' and ‘compared to what?’ to help see information and challenges in other contexts and perspectives. So your friend has bought a brand new car and you suddenly hate your old car? Ask, 'I don't like my car, compared to what?'  Maybe the frame of comparison could be walking or catching the bus rather than your friend's new car.

Explore More
Framing is featured in these playbooks:

The main limitation of Framing is the moderating effect of individual values and pre-existing beliefs. For example, studies by Paul Brewer in 2001 demonstrated that prior opinions about gay rights resisted Framing messages. As you’d expect, existing strong opinions or deeply held beliefs will resist Framing messaging.

The amount of knowledge of an individual has had mixed results from Framing studies. While lack of knowledge generally tends to lead to greater impact of Framing, greater knowledge when not linked to strongly held beliefs might also be susceptible to Framing. Again, mixed results on this one, see this paper for more.

Some argue that Framing is less potent today with a democratisation of media via the internet, however, the counterargument is the tendency towards media silos based on views and beliefs, and the persisting monolithic ownership of media and social media platforms.

Beyond that, if you accept that Framing has considerable validity, there will be a backlash against organisations and people who are caught using it to influence when it is perceived as manipulative rather than empowering. At least, you'd think there'd be a backlash...

Media sources such as CNN and Fox News frame the same news and events totally differently, each adding their own context and norms to the information. New multi-perspective sites such as All Sides Media present these different perspectives, and frames, on the same topics quite well.

Created well before Covid, Tversky and Kahneman conducted an experiment in 1981 where participants were asked to choose between two treatments for 600 people affected by a deadly disease. The treatment options and alternative Framing are summarised in the following table:

Even though the options are the same, just worded differently — Group 1 saw 72% of people choose the positively framed Treatment A; while Group 2 had only 22% choose the same option when the negative framing was presented.

The term ‘Framing’ was first coined by anthropologist Gregory Bateson in 1955, who used it to explain how people interpret and evaluate information. However, it was Erving Goffman who presented it as a more holistic theory.

Listed as the sixth most-cited author in the humanities by a 2007 Times survey, Goffman was an influential Canadian sociologist. He defined Framing as a theory in his work and 1974 book Framing Analysis.