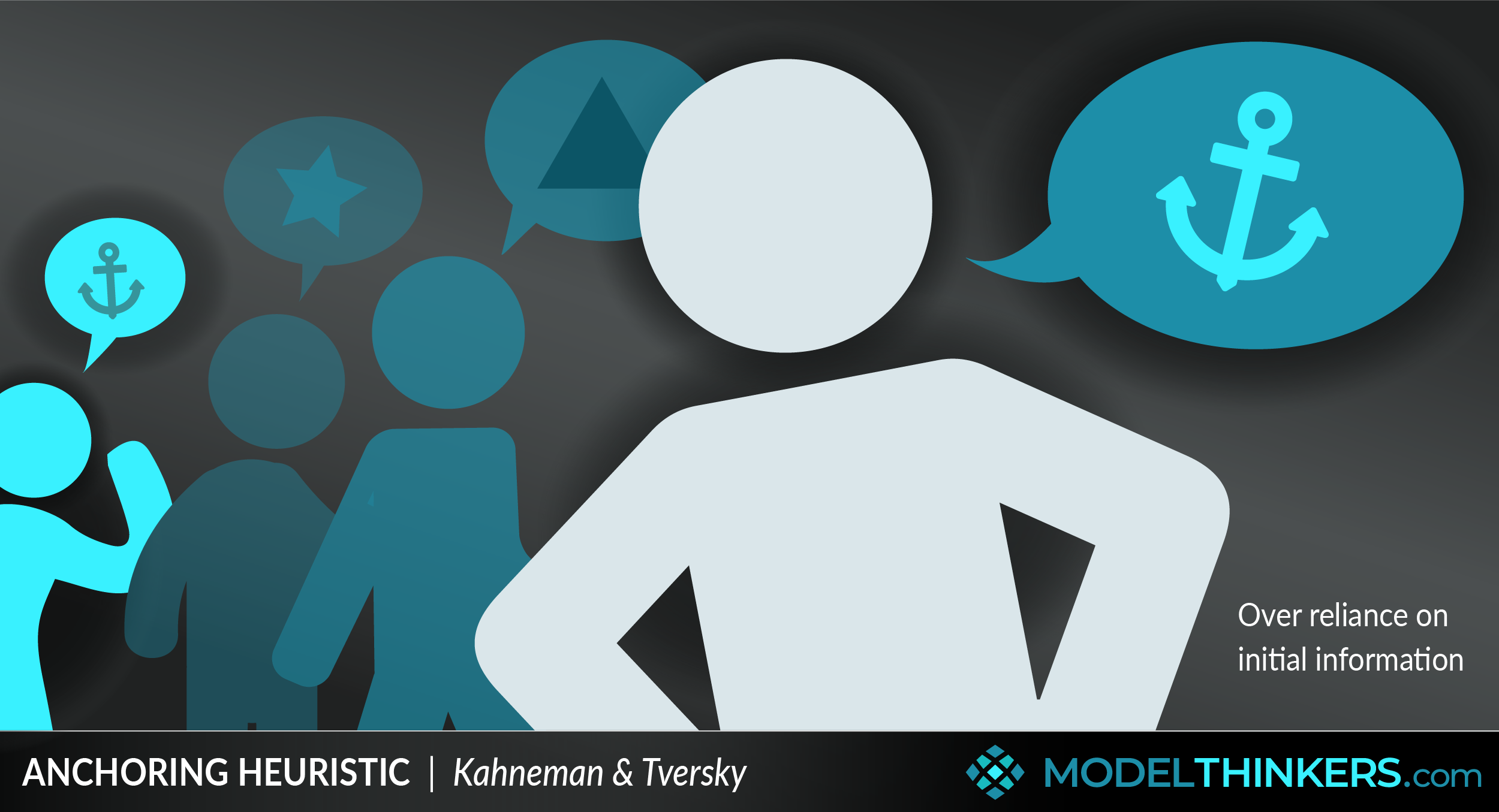 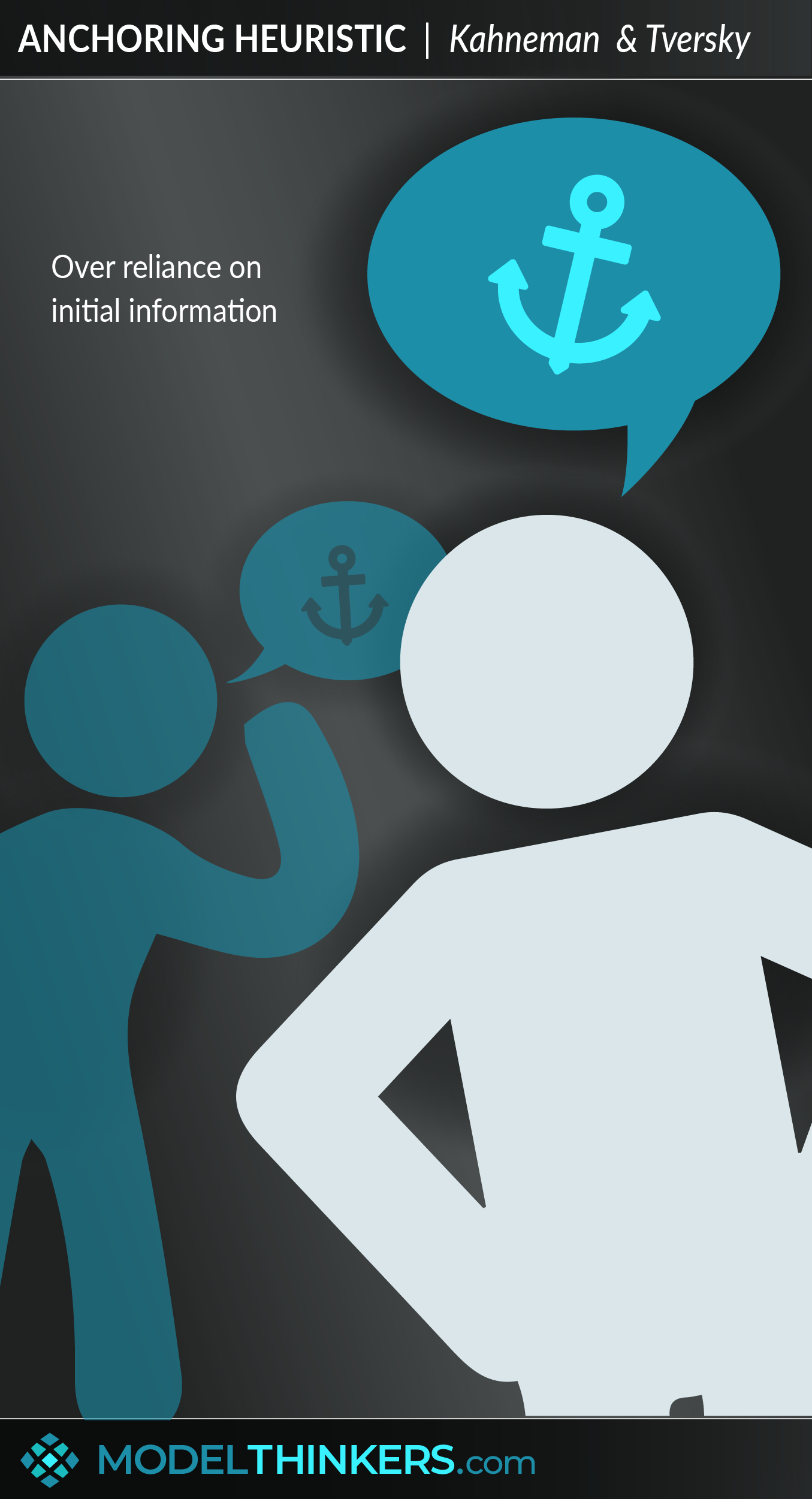 Let's say I told you that joining ModelThinkers costs US$200. It doesn't — it actually costs US$60.

Given the title of this model, you likely know that I was anchoring you — yet it's also likely that the US$60 seemed even cheaper than if you just heard it isolation. That's the Anchoring Effect.

We've already seen an example with pricing. In negotiating, introducing a starting figure means that there will be a tendency to 'anchor' and compare later offers in terms of that initial proposal.

It's a heuristic that constantly comes into play and should be interrupted or used in buying and selling as well as negotiating. It's so ingrained it's even been shown to impact judges who are anchored by absurd sentencing demands (see In Practice below for more).

The Anchoring Heuristic, also known as the Anchoring Bias or Anchoring Effect, is part of behavioural economics and an outcome of Fast and Slow Thinking.

It's linked to the Availability Heuristics and complements models such as BATNA & ZOPA in negotiations and should even be considered as part of a pricing strategy in the 4Ps of Marketing. It also helps to explain the Halo Effect and the power of first impressions.

Anchoring can function as a cognitive bias and, as with all biases, can be very hard to interrupt. The best option here is to delay your decision and try to reestablish a new ‘anchor’ based on a reasonable reference of your choosing.

Anchoring is commonly used to influence how pricing is received. It works, but setting your anchor price too high might create a backlash or resentment.

The first price mentioned in a negotiation, whether it's mentioned negatively or positively, will tend to anchor the conversation and influence the outcome. Ideally, you will define this first anchor. If your counterpart makes a first offer, before you counter, be sure to defuse their anchor by arguing against it to trying to ‘re-anchor’ the negotiation with a new figure.

Explore More
Anchoring Heuristic is featured in these playbooks:

The Anchoring Effect has been consistently replicated in a number of experiments and studies, with some variations. For example, there remains debate on the impacts of experience in a domain, and in the cognitive ability of participants — with studies in these areas returning mixed results.

That said, it is a largely accepted phenomenon.

In a 1997 experiment by Strack and Mussweiler, the two groups of participants to guess the age of Mahatma Gandhi when he died. Before the groups answered, they were anchored by preceding questions. The questions and results were as follows:

This excellent description by Harvard Law Professor Guhan Subramanian outlines his recommendations and experience in using and countering anchoring in negotiations. From defusing anchoring to justifying an offer that you want to become an anchor.

Anchoring and the law.

Anchoring and the breadmaker.

A company called Williams-Sonoma famously was struggling to sell there new bread maker which was priced at $279. Rather than change the product, or even lower the price, they did something surprising. They started selling a second breadmaker for $429. The result? Few people bought the expensive bread maker but the sales of the (now) cheaper one doubled. While it's hard to know the exact motivation here, it isn't a stretch to posit that the anchoring heuristic was at play — and the 'cheaper' bread maker suddenly seemed like a bargain.

The anchoring heuristic is a cognitive bias that has a range of implications.

Use the following examples of connected and complementary models to weave the anchoring heuristic into your broader latticework of mental models. Alternatively, discover your own connections by exploring the category list above.

The anchoring and adjustment heuristic was first identified by Daniel Kahneman and Amos Tversky in 1974. The ‘adjustment’ refers to the tendency for subsequent judgements to change based on the initial anchor. We have shortened this heuristics name to the more familiar ‘anchoring heuristic’. See their book Thinking, Fast and Slow for more.