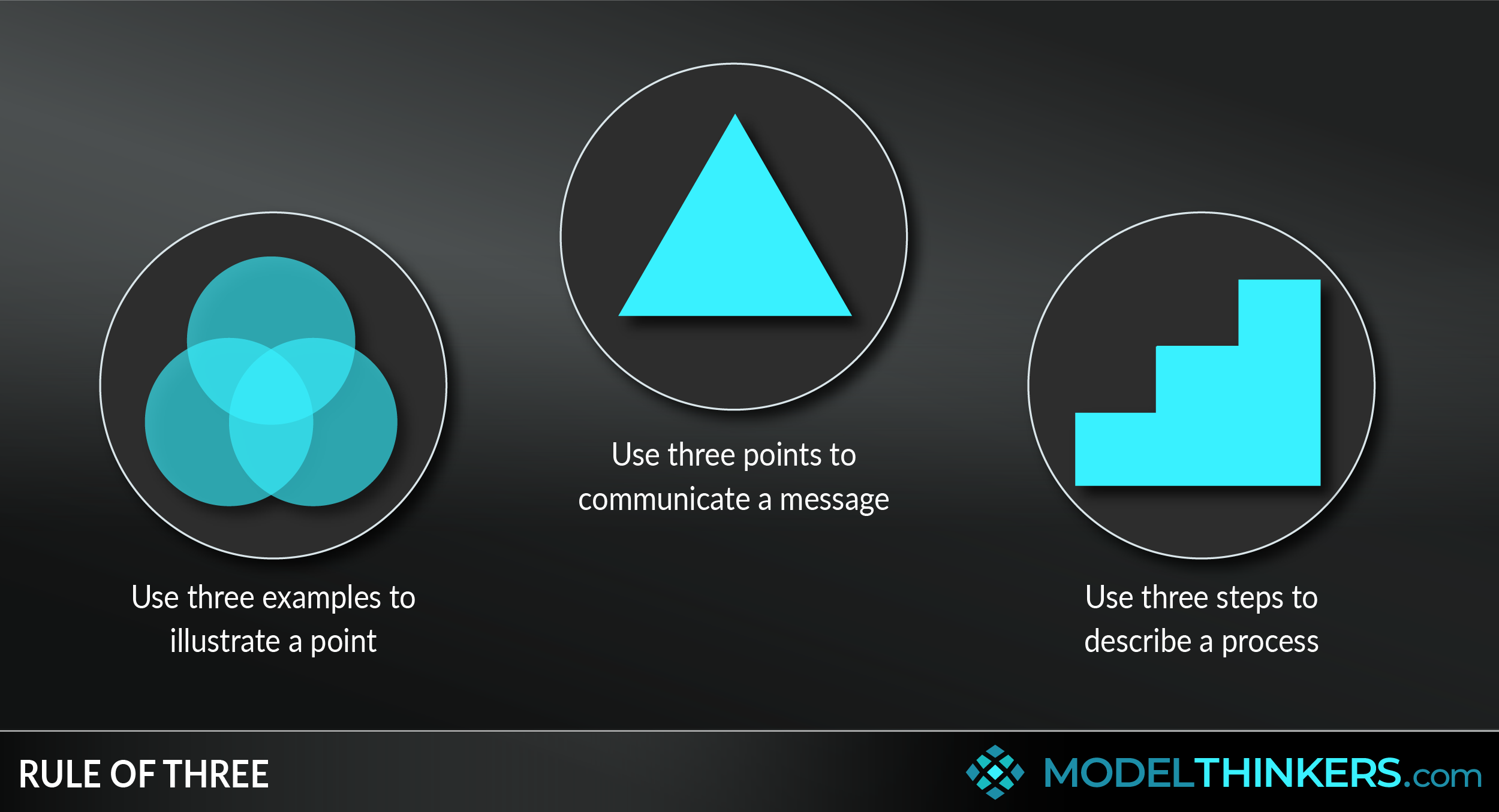 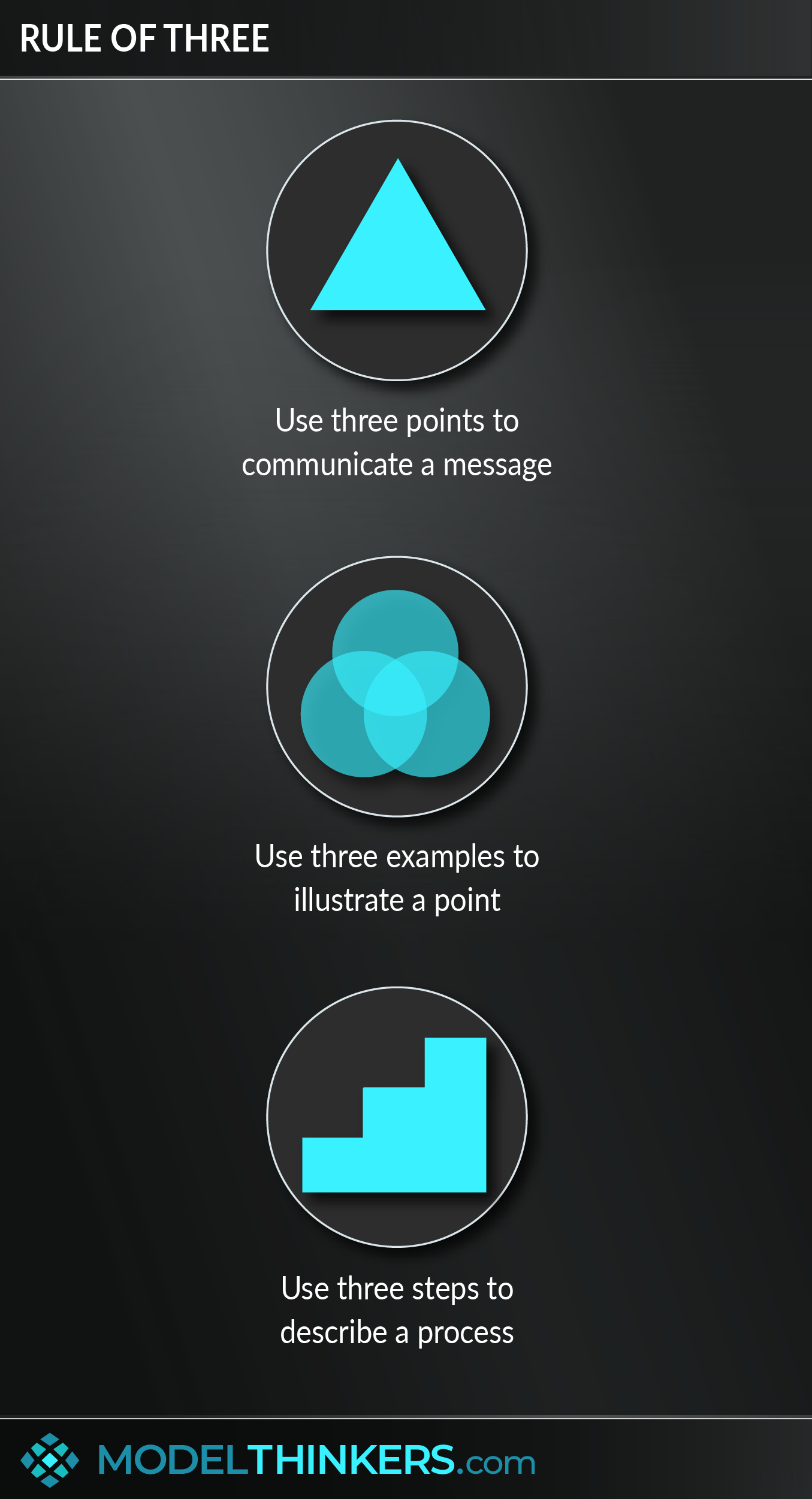 Was De La Soul right, is three really the magic number? Dive into this model and decide for yourself.

The Rule of Three is a communication principle arguing that three is the optimal number of examples, points and/or characters to use for the most satisfying, impactful and memorable results.

CAN’T SEE THE FOREST FROM THE THREES ;).

Once you start looking, you’ll see the Rule of Three everywhere, for example:

HOW TO MAKE BETTER USE OF THREES.

There are a number of arguments about why the Rule of Three works. One is the prevailing view that working memory can only process around three or four new elements at any point in time. Another is the observation that three is the most efficient number of points required to establish a pattern. Others point to the satisfying rhythm of three sentences, words or phrases.  No matter why it works, if you want to experiment with the Rule of Three you can apply it in a number of ways:

The Rule of Three plays well with other communication models. It’s no coincidence that Aristotle’s Rhetoric is built on three key elements of Ethos, Logos and Pathos; it’s highly recommended that you combine the Rule of Three with Minto’s Pyramid when presenting information; and the three-act structure is often woven into the Hero's Journey.

It is a versatile model though, so take it beyond communication and think about incorporating the Rule of Three into experiments using Split Testing, in productivity as you use it to limit your current ‘doing’ in your Kanbans, and even in decision making as you choose how to weight your Pugh Matrix. The possibilities are endless.

If you need something to be remembered or to stand out, try calling it out or talking about it three times.

Experiment with using three in comedy and jokes; using the Rule of Thirds in your visual communication and photography; and even in your productivity techniques by having a maximum of three things on your to-do today list at any point in time.

Explore More
Rule of Three is featured in these playbooks:

Overuse of any communication technique can become jarring, and the Rule of Three should simply be seen as one of the arrows in your toolkit. To that end, mixing your approach and changing the rhythm of your sentence structure is important.

In addition to rhythm, sometimes using two examples or points can be useful to provide a binary or contrasting view rather than pointing to a pattern.

Martin Luther King Jr— I have a dream.

The Rule of Three is a feature of many of King’s speeches. This site breaks down his most famous speech, and captures this key example:

Note that even the list of six items — black men and white men etc. — has been grouped in three groups of two, to maintain the rhythm of the Rule of Three.

Evidence of the Rule of Three can be traced back as far as Aristotle and biblical writing. Aristotle, inherently captured it in his Rules of Rhetoric, though it is unclear who formally named and identified the ‘rule’, thus we’ve left the model uncredited.