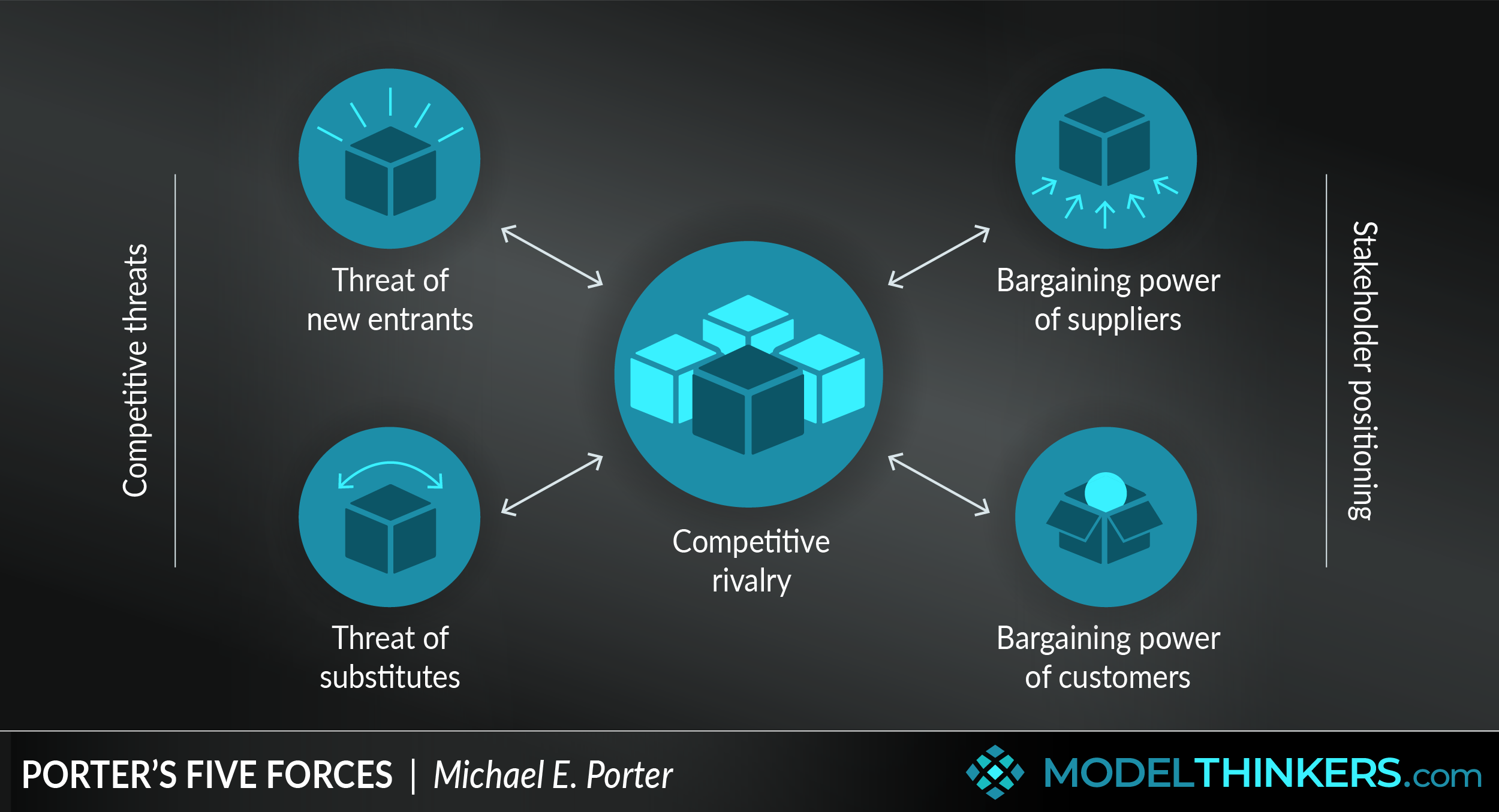 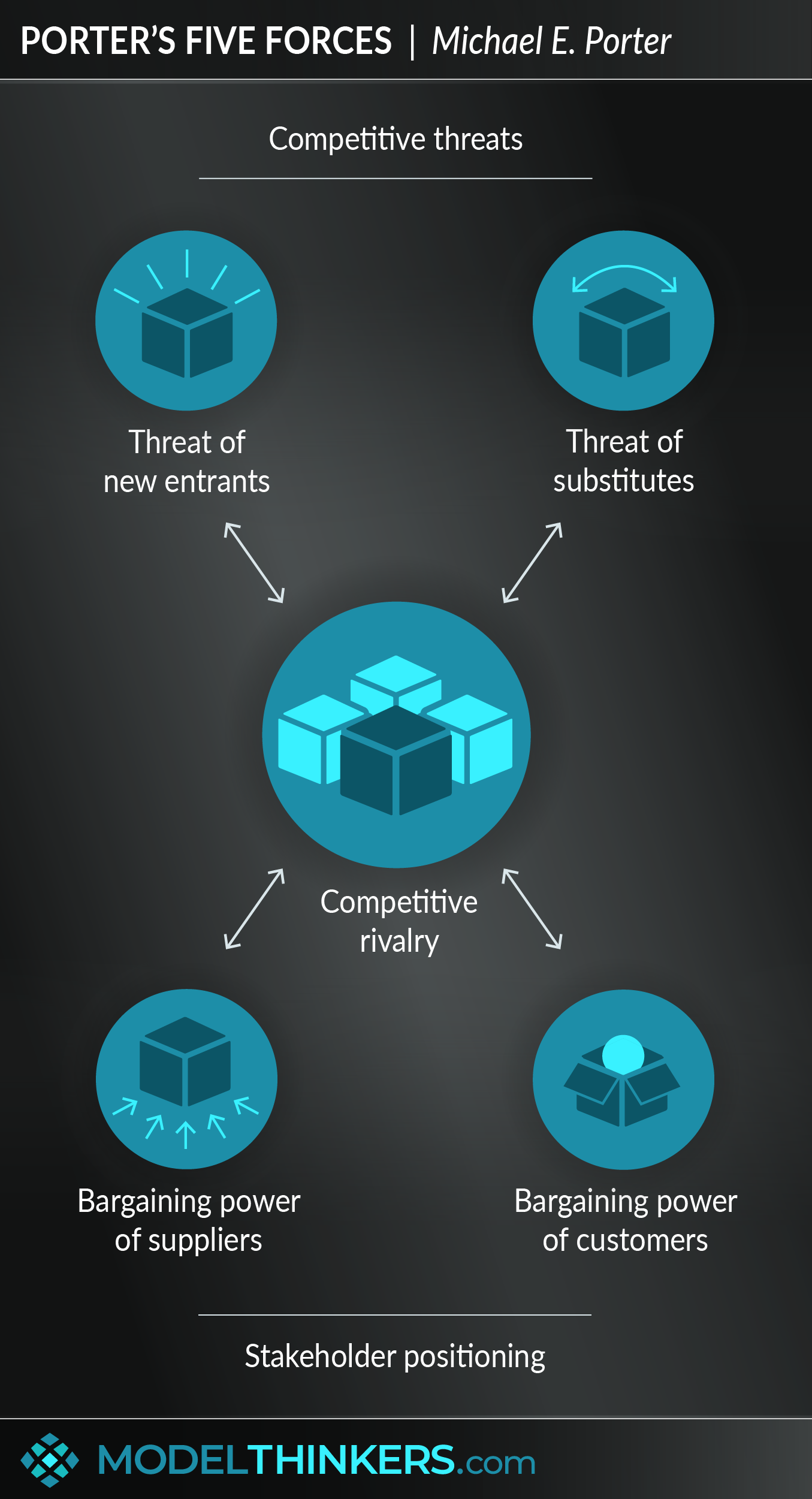 Porter’s Five Forces analyses the competitive intensity of an industry sector based on current rivalry, potential new entrants, and the bargaining power of suppliers and customers.

This analysis will help inform the profitability potential and attractiveness for the business or product initiatives. The five forces considered as part of the analysis are:

Porter's Five Forces analysis can be considered as part of a business or product strategy to expand your competitive advantage, consider cost adjustments, and potential market share.

Creating a successful business depends on your ability to understand your competitors – being aware of their marketing strategies allows you to successfully promote your product.

If you are in a profitable industry that yields a high return, emerging competitors will eventually decrease your profitability. Determine factors that could prevent new businesses from entering the industry, such as patents, regulatory and capital requirements, access to distribution channels, and industry profitability.

Look at products that use different technology or business model but try to solve the same problem as your business. If you are selling wine, beer can be considered your substitute. Determine the availability of close substitutes, ease of substitution, and the number of substitute products available on the market.

Are your customers able to put your business under pressure and cause price changes? If buyers have many alternatives, their buyer power is high, but companies can reduce buyer power through measures such as loyalty programs or the lock-in effect.

Do the suppliers of your raw materials excerpt power over your business because of the lack of alternative suppliers? Consider supply chain sensitivity and alternatives.

This framework is generally used as an important tool as part of a broader analysis that might consider value chain analysis, the BCG Matrix amongst others.

Explore More
Porter's Five Forces is featured in these Playbooks:

The 7th International Strategic Management Conference outlined this surprisingly detailed academic case study of the global expansion of a Turkish food company. The use of Porter’s five forces was integral to the competitive analysis.

In the mid-1990s, theoreticians from the Yale School of Management proposed a 6th force, or 'complementors', to compensate for the lack of strategic alliances in the original framework. Porter rejected the idea and stated that complementors are in fact just factors that affect the five forces.

Porter’s framework has received criticism from academics and strategists for failing to take into account the following facts: competitors and other forces on the market are not unrelated and they often interact, the source of value is represented by structural advantage, and participants in a market can respond to competitive behaviour, thus lowering uncertainty levels. Another limitation of this model is not considering customer-centricity and the importance of creating customer value.

Porter’s five forces is a model that can be very useful to assess the attractiveness of your industry, but it may need to be combined with other frameworks if you want to include the resources that your business is bringing to the industry into your analysis.

Use the following examples of connected and complementary models to weave Porter’s five forces into your broader latticework of mental models. Alternatively, discover your own connections by exploring the category list above.

The originator of this mental model is Michael E. Porter of Harvard University, who first published the framework in Harvard Business Review in 1979.

Read in-depth about Porter’s five forces from his 1980 book Competitive Strategy: Techniques for Analyzing Industries and Competitors, which has been printed for more than 60 times in English.