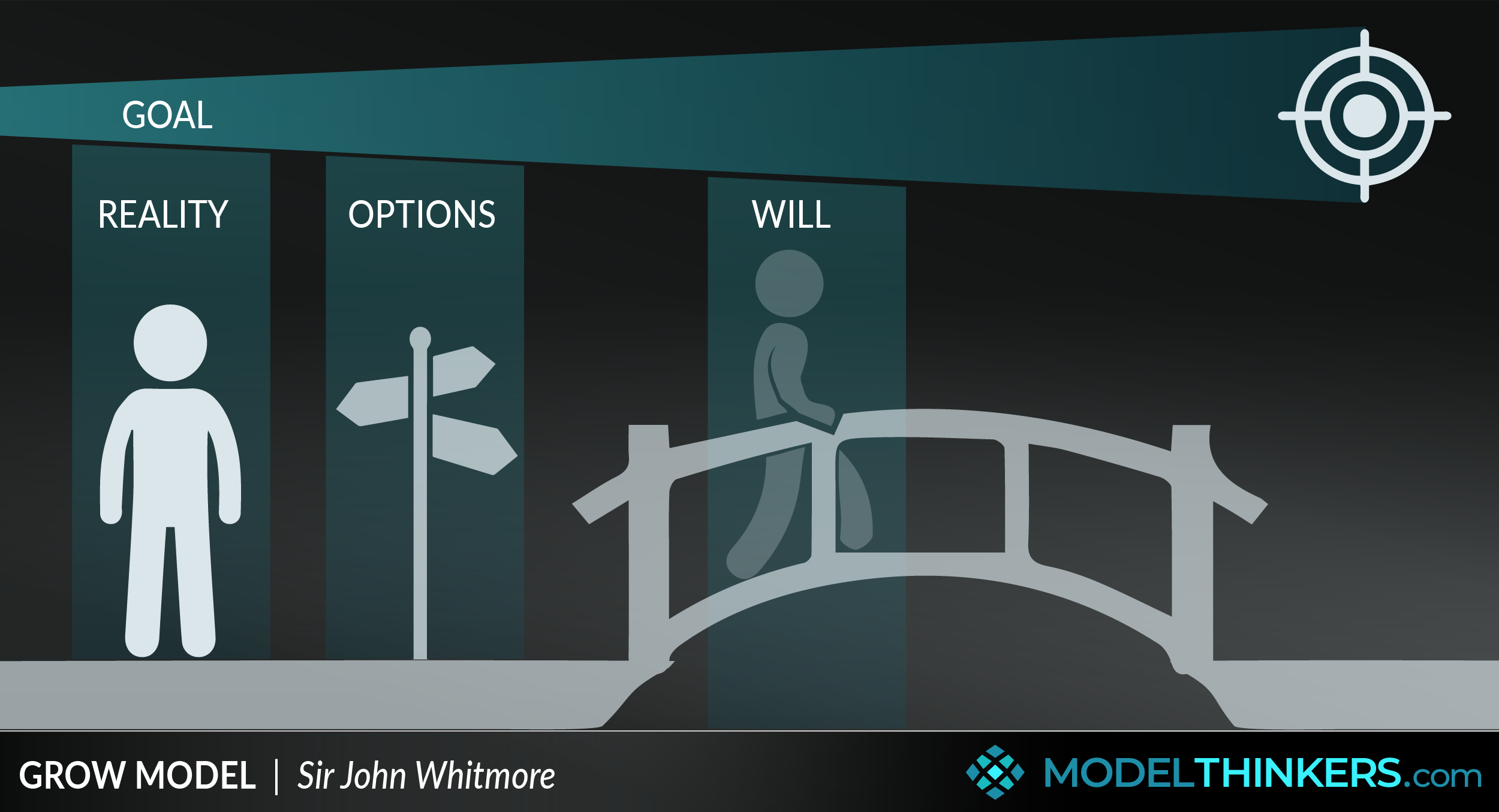 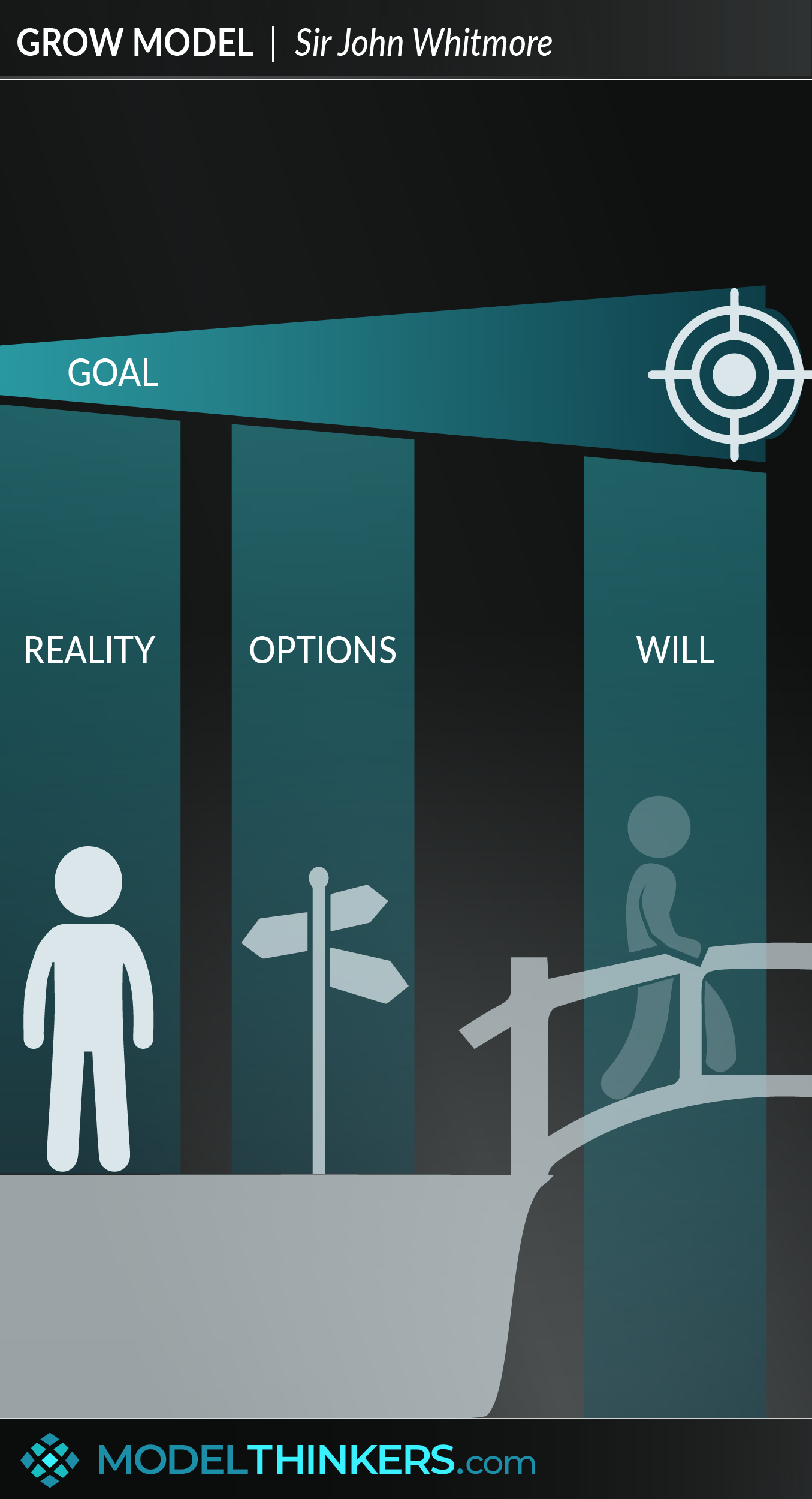 This decades-old model has been a key to modern coaching practice and remains the preferred approach for countless business coaches and leaders internationally.

Let’s look at each of the GROW steps with examples of questions to explore them.

“Coaching is unlocking people’s potential to maximize their own performance. It is helping them to learn rather than teaching them.”  - John Whitmore.

This quote from Whitmore, the founder of the GROW Model, captures his focus on empowering people to build self-awareness rather than telling them the answers. So, as is typical of most coaching models, GROW Coaching avoids directive advice and instead helps the participant to uncover their own way forward. See the Limitations section below for some of the problems with this approach and alternatives to GROW.

MORE VERSATILE THAN YOU THINK.

GROW is a foundational and popular coaching model in business. It can also be a powerful self-reflection tool to explore challenges as an individual.

Beyond coaching conversations, the ‘gap analysis’ that lies at the heart of GROW lends the model to a variety of other applications, including:

Explore the Goal stage of GROW with your understanding of Loss Aversion and Hyperbolic Discounting, and you might even help define goals that matter by applying Jealousy as a Map.

A SWOT analysis might help with the Reality and Option stages and you can apply the Pareto Principle or Impact Effort Matrix to prioritise various options. First Principles is also a powerful model in relation to breaking down assumptions and uncovering new alternatives.

In terms of Will, consider the SCARF model to weigh up threats and rewards; and incorporate the EAST Framework and/or Habits to embed the change by leveraging people's automatic pilot rather than willpower and effort alone.

Throughout a GROW Coaching conversation, experiment with using the 5 Whys to explore the root cause of the issue — though some coaches would warn against asking 'why' questions which moves people into a judgment mode.

As mentioned above, for broader applications of GROW, consider using it in pitches or presentations as a diametrically opposite approach to Minto’s Pyramid — with GROW uncovering answers for your audience versus Minto’s Pyramid delivering those answers upfront.

In managing people, parenting, friendships or anywhere — try to avoid jumping to a solution and delivering your 'wise advice'. Instead, take a breath, and experiment with working through the GROW Model. Focus on questions and allow the person to reveal their own answers.

Use this model as a do-it-yourself coaching process.

Remember to apply GROW dynamically rather than as a fixed script or set process. Be present and prepared to move between the stages when required.

The Goal phase of the model involves gaining a shared understanding of the desired outcome. In uncertain situations, this might even be about gaining clarity. Strike a balance between aspirational goals and ensuring you have a specific short-term goal.

This stage is about defining what your coachee has to work with, what they've tried, and what are their strengths moving forward.

Go broad with exploring what’s possible and challenge the coachee to be innovative and open-minded in generating alternatives.

Will is the final stage and can relate to the specific steps they'll take next, including when and who else it might involve. Also exploring the potential blockers for taking that action to ensure they are set up for success.

Explore More
GROW Model is featured in these playbooks:

One criticism of GROW is that it anchors the entire process on a defined goal upfront and therefore is less suited to more open-ended or ambiguous areas that will be better suited with broader exploration. David Clutterbuck, a prominent management author and coach, describes the story of a GROW coaching session where the goal is fixed and the coach is focused on reality when the exec being coached admits that they actually lack purpose and drive. Rather than going there, the coach refocuses on the original goal.

Of course, a counterargument could be that a skillful coach applying GROW could apply it more dynamically and even identify a goal to explore an area of ambiguity.

Clutterbuck also criticises the dependence on any single system or model for coaching, suggesting that while a system like GROW might support inexperienced coaches, those with more experience must quickly move to a more “flexible, people-centered approach.”

In the context of discussing ‘inflexibility’, a broader criticism is that some situations might benefit from a more directive rather than coaching approach. For example, if someone is unable to see options or even has a false view of their reality, the situation might require direct input rather than questions alone.

The final problem with this model tends to be more in the application. It should not simply involve working off a script of questions rather, to be impactful, the coach must be present, actively listening, and use the model more as a flexible guide rather than a script.

Finally, variations on GROW tend to either break down existing steps in GROW and/or expand on the approach, for example:

As mentioned, this is one of the most popular coaching frameworks currently used in business. There are a number of example coaching conversations that you can use to view this in practice, including this one from South West Coaching or this one from In Good Company.

The GROW Model was first described in Sir John Whitmore’s 1992 classic book, Coaching for Performance. Many consider it to be the foundational model for business coaching and, even when not formally used, tends to be behind many coaching practices.

Sir John Whitmore founded the Performance Consultants, originally designed to improve performance in tennis and skiing, but which broadened into business coaching and continues to consult and apply his model today.